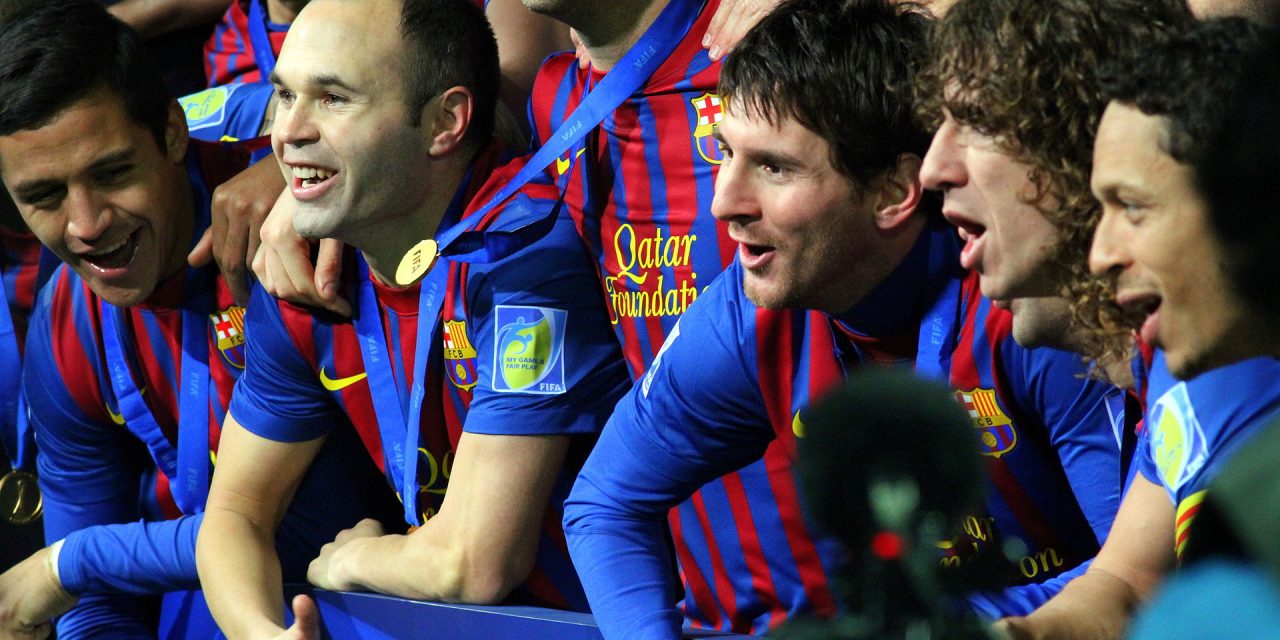 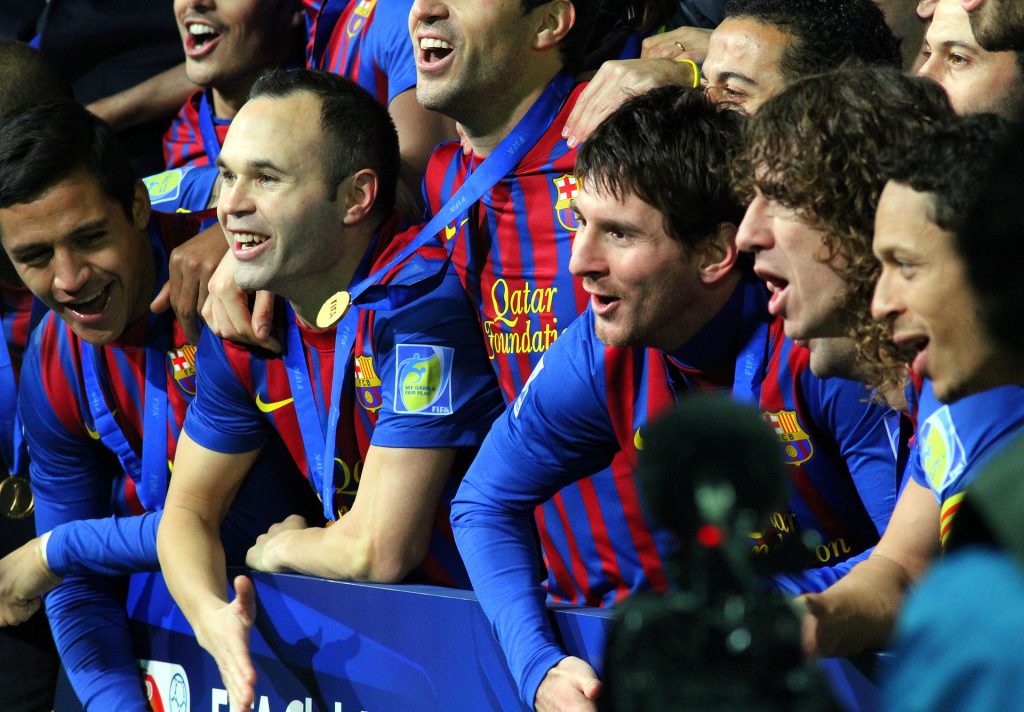 FC Barcelona celebrates a victory against Santos FC in 2011. Now, star player Lionel Messi plans to leave Barcelona after 20 years with the club./Courtesy of Wikimedia Commons

On Aug. 14, FC Barcelona made history in their match against Bayern Munich, but for all the wrong reasons. For the first time since 1951, Barcelona lost by a margin of six goals. Their historic 8-2 defeat in the Champions League quarterfinals has left the world shocked, and it’s the first time any team has conceded eight goals in a European knockout game. After one of the most infamous matches of the century, questions swarm over where Barcelona goes from here.

The cracks in FC Barcelona have been widening for years, and after the 2016-17 season, their flaws truly began to manifest. The team relied heavily on forwards Lionel Messi, Luis Suárez and Neymar for their offense, but they lacked heavily on the defensive end. In 2017, in a surprising turn of events, Neymar — poised to be Messi’s successor — left for Paris Saint-Germain in a world record-breaking €222 million ($263 million) transfer that left Barcelona scrambling for a replacement.

Despite a series of expensive transfers, Barcelona has never been able to fill the void left by Neymar. Totaling to €385 million ($460 million) in transfers, the team acquired French winger Ousmane Dembélé, Brazilian midfielder Philippe Coutinho and French striker Antoine Griezmann, but the team hasn’t enjoyed great returns on these expensive investments. Dembélé has barely played for Barcelona, missing over 80 games in the span of three seasons due to a series of injuries. They also loaned out Coutinho after a dismal stint to Bayern Munich, where he contributed two goals and an assist in the 8-2 crushing of Barcelona in the span of 15 minutes. Griezmann, after rejecting Barcelona in 2018 in a documentary titled “La Decisión,” ultimately transferred to Barcelona a year later and has since been largely unspectacular, grabbing a mere 15 goals across 48 matches.

Neymar’s absence is not the only issue Barcelona hasn’t fixed. The lack of solid defenders and an aging midfield unable to maintain possession only compounds their problems. Against Bayern, only four of the 10 Barcelona outfield players were under the age of 30 while Bayern had seven under-30 players. The modern game has evolved and requires teams to consistently pressure their opponents by actively cutting passing lanes and forcing risky moves. Without a youthful presence on the team, particularly in the forward and midfield areas where pressing is critical, Barcelona falters against any team that attacks with energy and speed.

Year after year, the team is humiliated during the season, particularly when playing away. They are outrun, outplayed and outclassed on the pitch; the players also have a weak mentality. The backbone of the team is plagued by the ghosts of their past, their successful era overshadowed by the embarrassments of the past four years. The club’s management is embroiled in allegations of corruption as they attempt to cash in on the remaining few moments of Messi’s star. The once-glorified La Masia academy now stands neglected and in freefall.

Not only does the team struggle with their players, but their staff has also been problematic. Former Head Coach Quique Setién, brought in to replace former manager Ernesto Valverde in January after a string of disastrous results, was sacked three days after the defeat to Bayern. Barcelona’s Director of Football Eric Abidal is also set to be dismissed due to a string of poor signings. Prominent figures in the club’s sphere are demanding the resignation of the club’s president, Josep Maria Bartomeu. Vice Captain Gerard Piqué has volunteered to resign in a bid to allow the club to rebuild. In sum, Barcelona lacks accountability from top to bottom, and the tides must now turn if the club wants any chance of returning to its golden age.

The root of the problem, however, is the team’s management. An aging squad, mediocre coaches and mismanagement of club finances are all administrative problems, not tactical ones. Coaches may come and go, but they won’t pull the club out of the administrative crisis it faces. The same problems that have persisted under three different managers — lack of a proper attacking plan, no defensive cohesion and lethargic movement — point toward an issue with the club as a whole, not just the coaches and players. It is time for the administration to resign. One cannot claim to love this club while supporting the way it is currently run.

But the final nail in the coffin is that Messi wants to leave the club. Hailed as the king of Barcelona, Messi has been with the club for 20 years. Throughout his career, Messi has stated numerous times that he would like to finish out with Barcelona. However, he has now submitted an official request to leave the club, leaving fans and the management in panic. Messi poses perhaps the biggest dilemma of all. He’s the symbol of Barca’s footballing prowess. With every passing year, however, the tides of time threaten to catch up with him. Yet his magic has not faded, as the Argentine is still on top of his game and breaking records. He still has an important role to play and must be the anchor that sees off the old guard and welcomes the new generation to carry on his legacy.

Barcelona desperately clings onto its glorious past. It’s time for them to say goodbye to those days, embrace their future and regain their soul. Build a new team around hungry, young players like Ansu Fati, Frenkie de Jong, Clément Lenglet and Riqui Puig. Seasoned veterans Jordi Alba, Sergio Busquets, MarcAndré ter Stegen and Sergi Roberto must accept their supporting roles in this new era. Old servants of the club, such as Suárez, Arturo Vidal, Piqué and Ivan Rakitić must be bade farewell and thanked for their years of service.

It’s time for Barcelona to reinvigorate their 121-year-old motto, “Més que un club” (more than a club). All we can pray for is one more miracle — for the return of the passion for the beautiful game and the fluid, attacking football that is part of the “Barca DNA.” But for now, we’re stuck with a mess de un club.