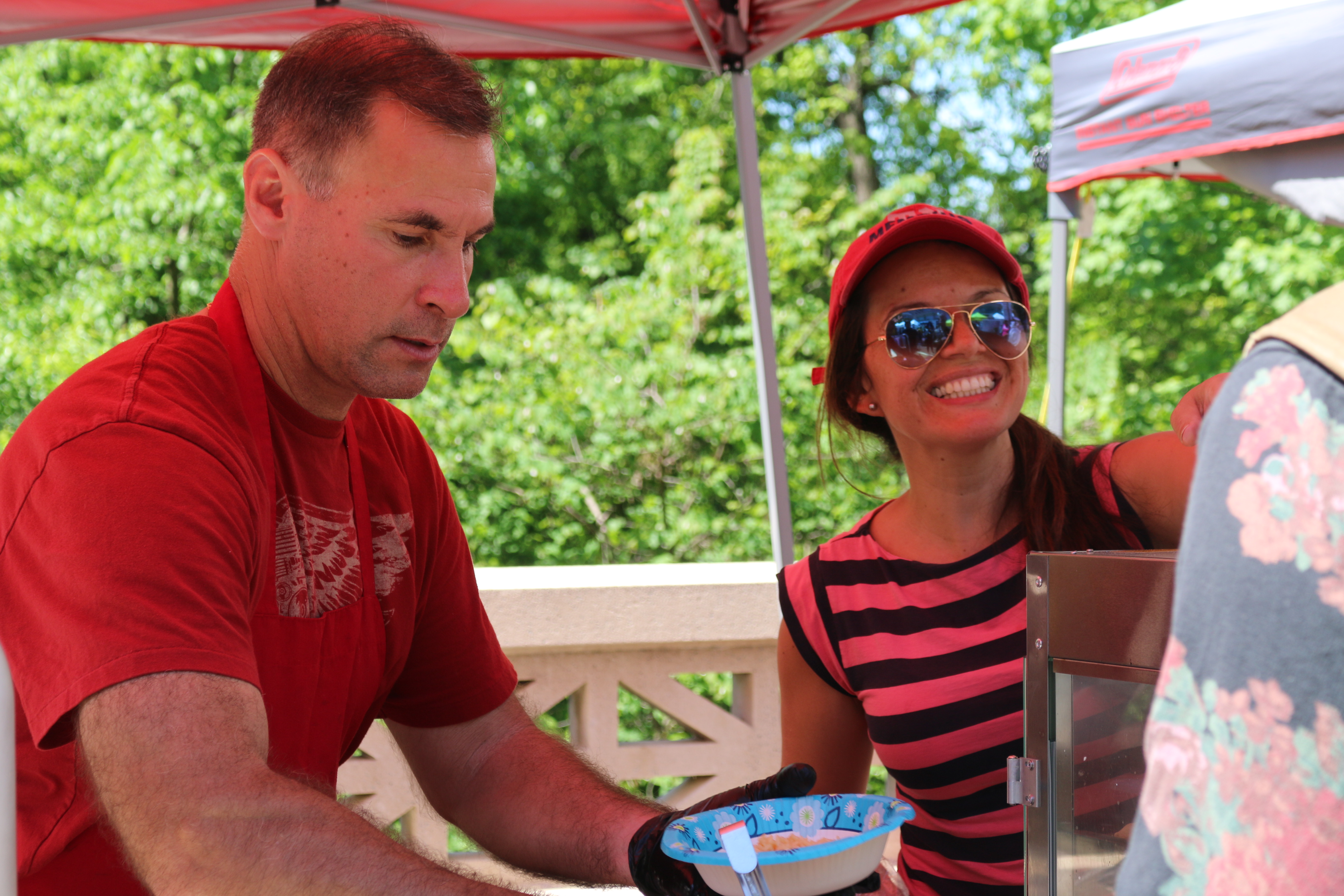 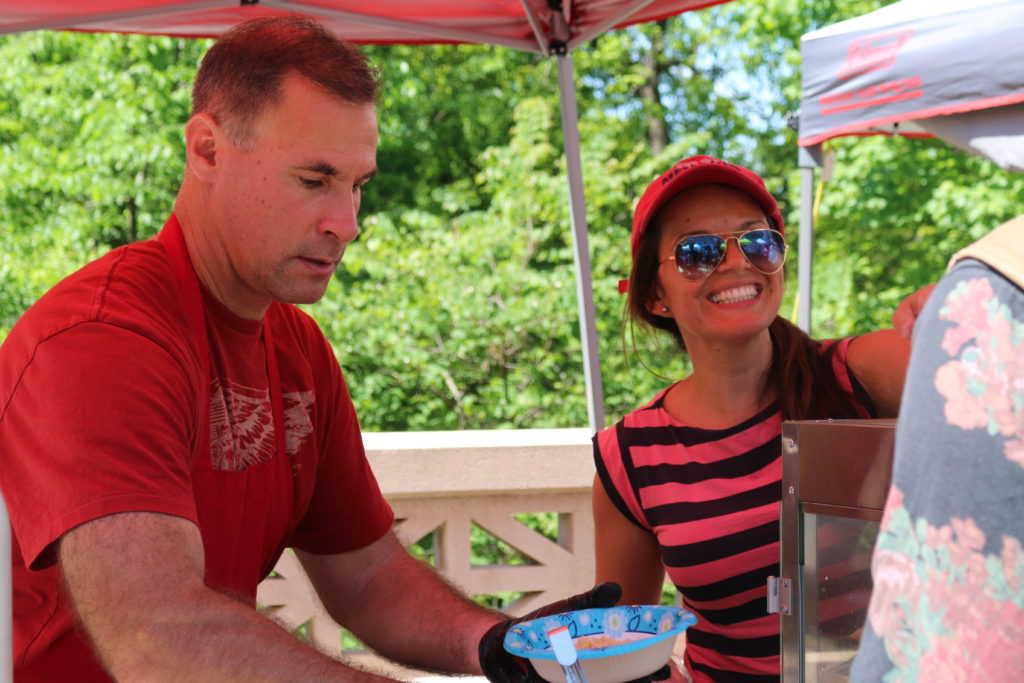 If Rey Martinez wanted, he could be a gambler. To many, his luck is uncanny. Even as he stared down the barrel of a gun in a Florida Marriott, his luck did not fail him. If robbers hadn’t entered the lobby at midnight, guns loaded, Rey Martinez would have never met his future wife, a Marriott employee who remained in touch with him after the incident.

But that’s the story you’ll likely never hear Martinez tell — not because he doesn’t love his wife, but because that’s not the type of conversation you usually have over empanadas and tamales, rice and mojos.

Clad in gym shorts and a red tee, Martinez runs a popular stand at Emory’s weekly farmers market, attracting lines that sometimes even spill in front of other vendors. Martinez and his wife of four years, Ana Maria Martinez, have spent the past 190 Tuesdays (3.5 years) feeding Emory students Cuban food — “the best Cuban food on this side of Havana,” as they like to say.

“Let’s go Cuban today! Forget the hot dog, forget the pizza,” he told a group of students emerging from gym class with yoga mats. “We got beans, rice, plantains, tamales.” Martinez looked at them with his eyebrows raised, as though even he himself was impressed by the options.

His animated conversations with customers often leave students smiling from ear to ear. That charismatic attitude, along with Ana Maria’s impeccable ability to remember a customer’s name and order, elevates their customer service, which they believe to be one of the most important factors in running a business.

“You want hot sauce with that? Mojo? Onions?” Martinez asked a student at the market, as Ana Maria handed her husband a plate half-filled with rice. He stood with his legs apart, knees slightly bent, ready for action.

Their stand, a derivative of his former restaurant Rey’s Cuban Cafe in Loganville, Ga., becomes the bustling center of campus every Tuesday. Though his restaurant was once the focal point of his work, Martinez had to give it up after being deployed.

Before marrying his wife, Martinez served in the U.S. Navy Reserves from 1990 to 2015 — first in Bahrain, then in Iraq and finally in Dubai, United Arab Emirates. During that time, his hard work, and perhaps a bit of luck, earned him a Naval Achievement Medal in 2007, a National Defense Medal in 2010 and an Iraq Campaign Medal in 2013.

“When I first joined, I did want to serve, but I wanted to do it for four years,” Martinez said. “I enjoyed it so much that I decided to stay another four years. And four years turned into eight years.”

Before he knew it, he was 44 and had served for 25 years. After returning from his latest deployment, Martinez decided he wanted to serve in a different capacity.

In 2015, when the Navy veteran and Cuban restaurant owner turned to his wife to tell her that he wanted to run to become the mayor, “el alcalde,” of Loganville, she was stupefied.

Did she ever think he would become a political leader? “Never.”

But he did. Now, as Loganville’s mayor, Martinez champions small businesses. It’s only fitting, then, that he works at Emory’s Farmers Market to pay the bills.

“I’m not about to raise taxes on the people of Loganville to raise my salary,” Martinez said. “I would rather work for it.”

He manages the workload by splitting up his week: two days serving food at the Emory and Georgia Tech Farmers Markets and the rest of the week attending to his mayoral duties.

Because he hadn’t previously served in a political position, he never imagined he would beat out two incumbents to serve on Loganville City Council in 2010, and then do it again in 2013. He didn’t realize that his work on the Council would eventually win him the mayorship, and he certainly never believed he would win nearly 67 percent of the vote.

With almost 1 million Latinos, the Latinx community in Georgia is the fastest growing in the United States since 2000, according to the Latin American Association. During the 2018 primaries, Latinx representation in Georgia tripled from that of previous elections, and though not all Latinx voters agree with Martinez, he became a recognizable face as Georgia’s first ever Hispanic mayor: clear skin, receding hairline, gregarious smile. Medium height, middle-aged, a spring in his step. He is Cuban, Puerto Rican and Georgian, with a Puerto Rican accent and confused Southern drawl.

“Last year I went to over 250 events [as mayor],” said Martinez, as he began to clean up his stand at the closing of the farmers market. Ana Maria, who is far more reserved but just as amiable, chuckled at the number.

At Emory, though, he devotes all of his energy into serving students. He tells his mayoral staff, “Do not bother me on Tuesdays from 9-5 unless something drastic happens.” And they don’t.

Thanks to his responsible staff, Martinez keeps his passion for cooking alive. But he doesn’t plan on being a chef his whole life. The next step? Governor. Maybe even president.

“I’m not afraid to say it. … I don’t anticipate staying mayor,” Martinez said. “I would love to be the governor one day. I enjoy serving the folks of Loganville right now, but I would love to serve the great folks of Georgia and maybe the United States? Who knows?”