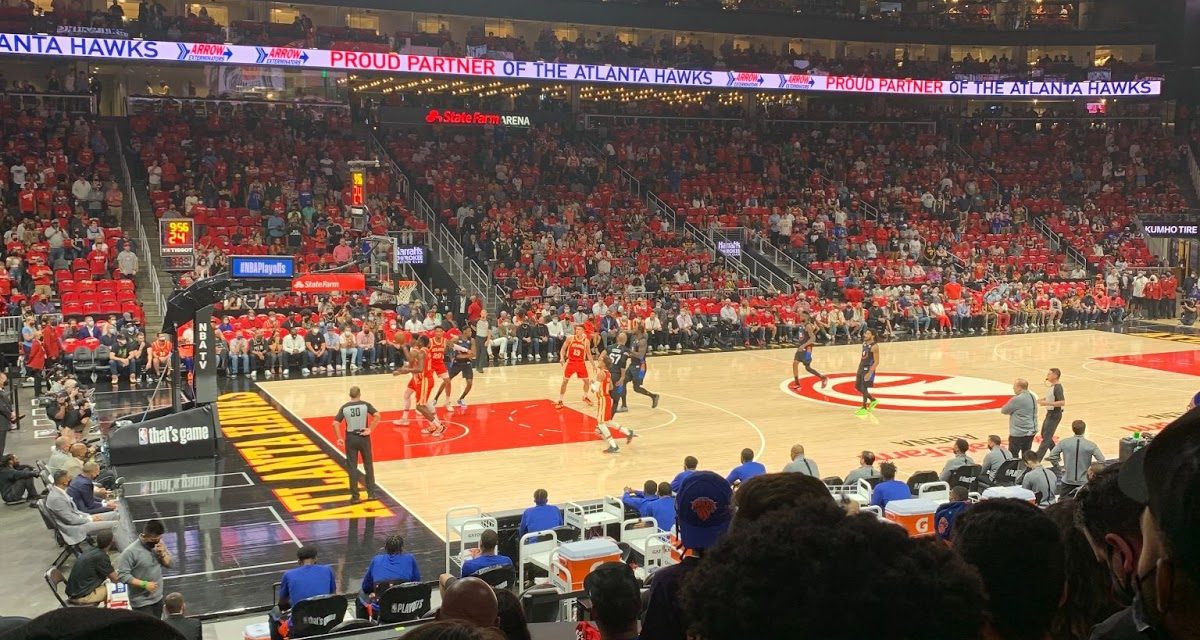 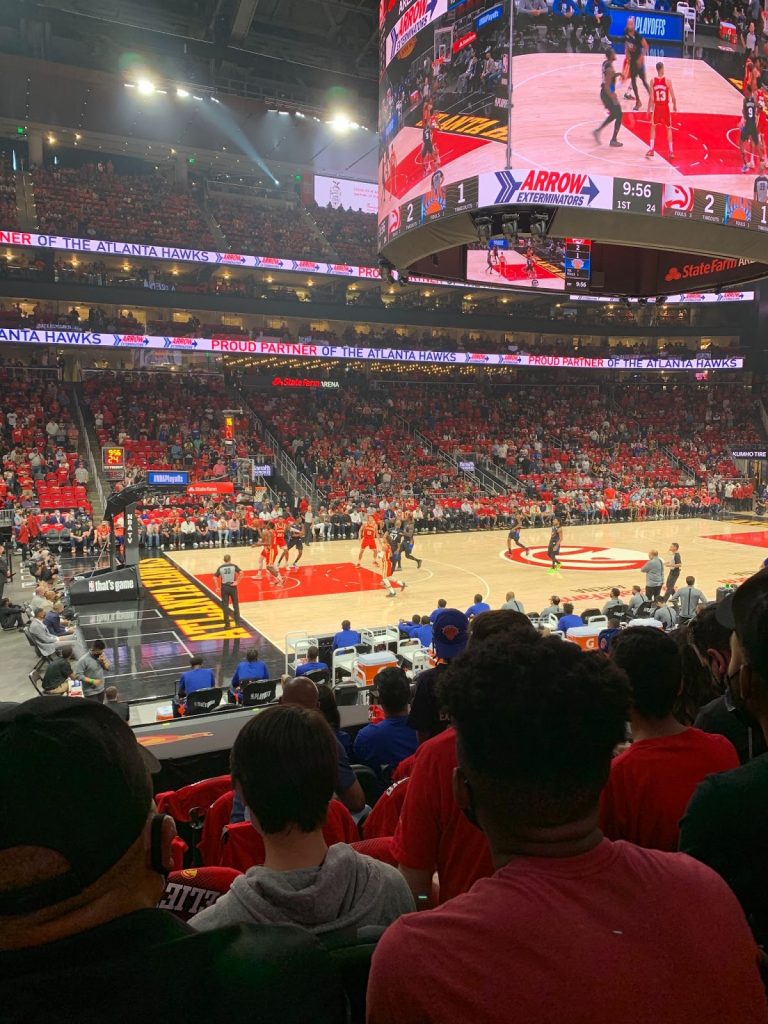 The Atlanta Hawks grab a rebound during Game 3 of the their first round NBA Playoffs series against the New York Knicks. In the prior game in New York, Hawks superstar Trae Young was spit at by a Knicks fan. (Jessica Solomon/Managing Editor)

As I sat with 15,000 other fans in State Farm Arena for Game 3 of the Atlanta Hawks and New York Knicks first round playoff series, I struggled to remember the last live sporting event I attended. Sitting shoulder-to-shoulder with a friend on one side and a stranger on the other while unable to hear the referee blow his whistle, the surreal feeling of live competition came flooding back. Thousands of people in one arena was unmatched after a long period of avoiding crowds.

While I was thrilled to be back, I was soon reminded of one aspect of the game I did not miss as much: drunk, belligerent fans. I attended the game with a friend who flew down from New York because it was far less expensive — including round trip airfare — to watch in Atlanta as opposed to in Madison Square Garden. In respect for my friend who is a huge Knicks fan, I supported the Knicks alongside him. As a Washington Wizards fanatic, I did not have a ton of stake in the game aside from the eagerness to return to in-person sporting events.

Albeit, I thought I was prepared for what may come our way, with my friend proudly repping an R.J. Barrett Knicks jersey in a sea of red Atlanta Hawks jerseys. However, my fears were soon met as the game became increasingly competitive. Hawks fans around us naturally targeted my friend, yelling certain slander, waving hands in our faces and not leaving us alone. Given the nature of the game, I would unfortunately expect nothing else. In fact, I felt lucky that those actions were the worst of it.

In the NBA playoffs thus far, there have been at least three incidents of inappropriate fan behavior, all of which occurred on May 26 and drew national attention. A Philadelphia 76ers fan threw popcorn on the Wizards’ Russell Westbrook. The same night, a Knicks fan spit on the Hawks infamous superstar Trae Young. Adding onto this vulgar trend were three Utah Jazz fans who made racist remarks to the parents of Memphis Grizzlies point guard Ja Morant.

While all of these individuals were banned indefinitely from those respective arenas, I was appalled that this was the extent of their punishment. The NBA should undoubtedly ban these fans from any NBA sponsored events in the future. I wouldn’t be surprised if those people take the opportunity to attend other nearby arenas where their teams may play in the future and continue their out-of-line behavior. In only banning from one stadium, these franchises are permitting these individuals to continue this behavior in other settings.

Now are vulgar fans going to stop me from attending in-person sporting events in the future? Absolutely not. I longed for the thrill of a long three-pointer and the elegance of a dunk right before my eyes. Yet, as we continue to return to a sense of normalcy, there needs to be a sense of control. Fans may be eager to emerge from this period and return to the thrilling world of sports, but a lack of respect has and will continue to dampen this atmosphere if these events continue to regularly occur.