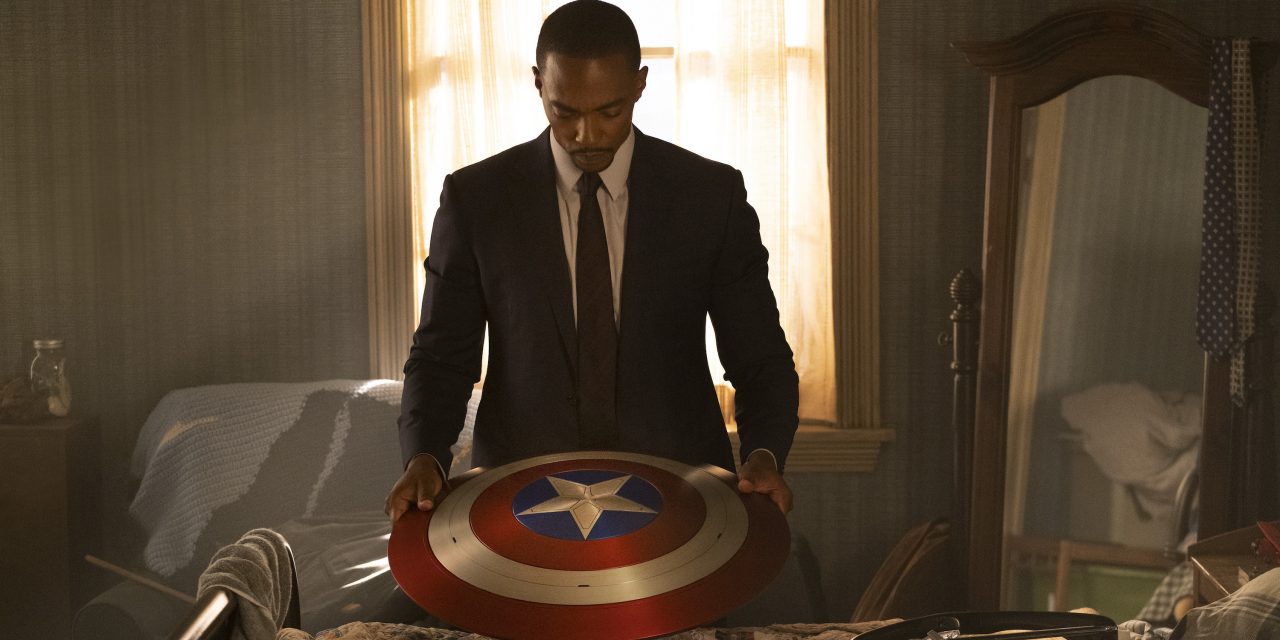 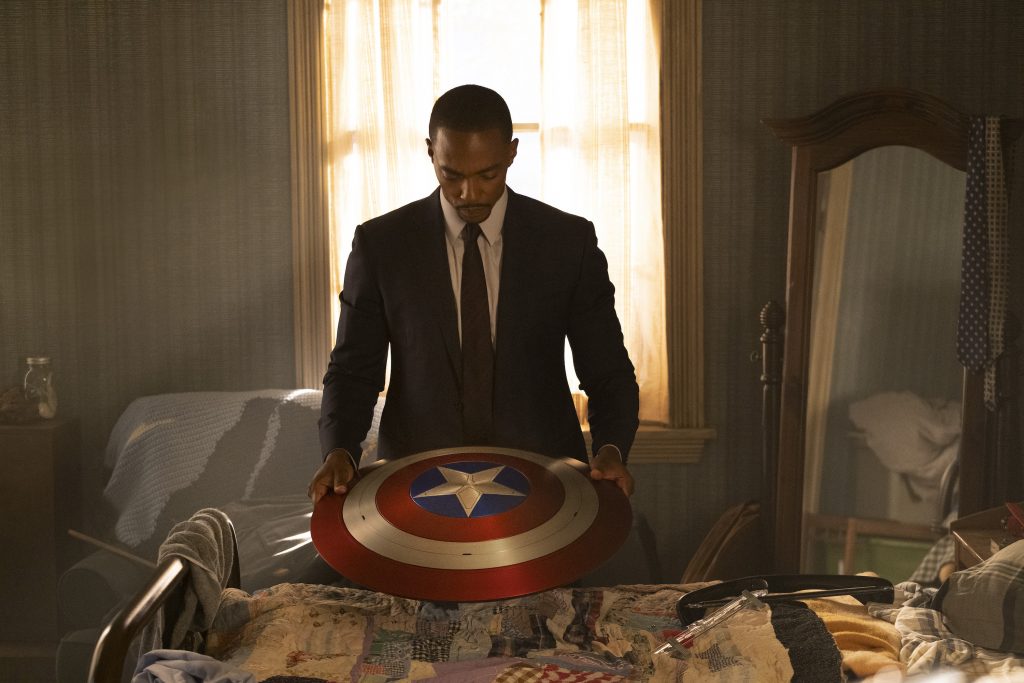 There’s nothing that Kevin Feige and Marvel Studios love more than subverting audience expectations. Thus, it seems fitting that merely two weeks after the finale of the Marvel Cinematic Universe’s (MCU) first television series, Marvel released the pilot of a show that couldn’t be more different from its predecessor. Whereas “WandaVision” was a more experimental and eccentric endeavor from Feige and Co., “The Falcon and the Winter Soldier” takes the studio back to the political thriller formula it perfected with 2014’s “Captain America: The Winter Soldier.” The show’s pilot, which premiered on Disney+ March 19, largely mimics the visual style of “The Winter Soldier,” while even bringing back two of the film’s stars as its leads: Sam Wilson (Anthony Mackie) and James “Bucky” Barnes (Sebastian Stan). However, what makes “Falcon” stand out from its Marvel peers is its intimate focus on these two leads not just as Avengers, but as actual human beings. By delivering a character-driven drama through a more traditional Marvel layout, “Falcon” is a refreshing, notably slower entry in the Marvel franchise.

The miniseries takes place months after the events of “Avengers: Endgame,” which concluded with an elderly Steve Rogers (Chris Evans) passing off his shield and mantle of Captain America to Sam. Uncertain of what to do with this new title bestowed upon him, Sam fights terrorists for the U.S. Air Force while simultaneously dealing with his ailing family business back home in Louisiana. Meanwhile, Bucky is experiencing PTSD from his days as a mind-controlled mercenary and embarks on a separate quest to make amends with those whom he has wronged in the past. The two heroes’ paths don’t cross in the pilot episode, entitled “New World Order,” but will surely converge sooner than later to battle the “Flag Smashers,” a terrorist organization that believes the world was better during the Blip.

When juxtaposed with the haunting, magical world of “WandaVision,” “Falcon” feels more like your conventional Marvel product; however, much like the town of Westview, there’s far more than meets the eye. Sure, the show starts with one of Marvel’s typical sweeping, visually stunning action sequences and features cheesy dialogue like, “The world’s broken, everybody’s just looking for somebody to fix it.” But every time the show appears to follow a certain path and succumb to certain tropes, director Kari Skogland not only subverts expectations but also adds fascinating wrinkles that seem to be — believe it or not — novel ideas for a superhero product to explore.

Some of the show’s novelty arises from its treatment of Sam and his compelling character arc. Steve chose Sam instead of Bucky to inherit the shield, and the repercussions of that decision plague Sam throughout the pilot: He must decide whether to use the shield and follow in Captain America’s footsteps or remain his own hero (and surprisingly, he makes that decision rather early in the episode). Meanwhile, he must deal with financial struggles back home as a result of having been blipped for the past five years. Even more so than “WandaVision,” the show examines the tangible effects of half the world’s population disappearing, which Marvel is able to further flesh out in their television shows. In addition, the show isn’t afraid to touch on heavier topics such as race and nationalism, and Sam is at the center of it all. The pilot’s cliffhanger ending introduces U.S. Agent John Walker (Wyatt Russell) and sets up a clash between Sam and the federal government.

The MCU has dealt Bucky’s character a raw deal in his previous appearances: in “Captain America: The First Avenger,” he was Steve’s sidekick who fell off a train; in “The Winter Soldier,” he was a stoic, brainwashed mercenary. Even when he finally joined our heroes in “Captain America: Civil War,” he was blipped soon after at the end of “Avengers: Infinity War.” Thankfully, he’s finally getting his time to shine as his own character in “Falcon,” as he makes amends with a list of people whom he has wronged in his past (a sort of reverse Arya Stark kill list). In the pilot, we follow his touching friendship with an older man with whom he shares a past connection. Considering how brooding and detached Bucky has been throughout his past in the MCU, his character development in this series is particularly exciting. By slow-rolling his eventual team-up with Sam, we can finally learn about Bucky as an individual and not merely as Cap or Sam’s sidekick.

Similar to “WandaVision,” “Falcon” would be best watched in a bingeable format, especially since it’s structured like a more drawn-out MCU film. As a result, the show feels a bit unsatisfying after one episode: the pilot is essentially the opening 40 minutes of a long film. While Skogland effectively sets up what is to come, the episode doesn’t stand alone like the “mini-movies” that we were teased. The special effects are blockbuster quality and the characters are layered, but the show still feels like it’s missing a sense of urgency. Let’s hope that things pick up sooner than later, and the remaining five episodes don’t disappoint.

By shifting straight from “WandaVision” to “Falcon,” Marvel is taking a full 180 degree turn that I suspect will be massively successful. For better or for worse, “Falcon” doubles down on many of the elements “WandaVision” lacked: clear-cut character arcs, bombastic battle scenes, cameos from popular Avengers, a definite villainous organization and effective political and social commentary. While “Black Panther” was undoubtedly a cultural milestone for its diverse cast, “Falcon” goes where no MCU film has gone by directly addressing Sam’s role as a Black superhero in American society. Not to mention, the show further fleshes out the world of the MCU post-“Endgame” in fascinating, clever ways that not only acknowledge Thanos’ snap but delve into the real-life effects of the Blip. While the show is taking its time to build a true identity (which is a bit concerning given the series’ meager episode count), “Falcon” is a must-watch for any Marvel fan. Marvel Studios and Kevin Feige will dominate the post-pandemic world of entertainment, and I’m eager to see where they go next.