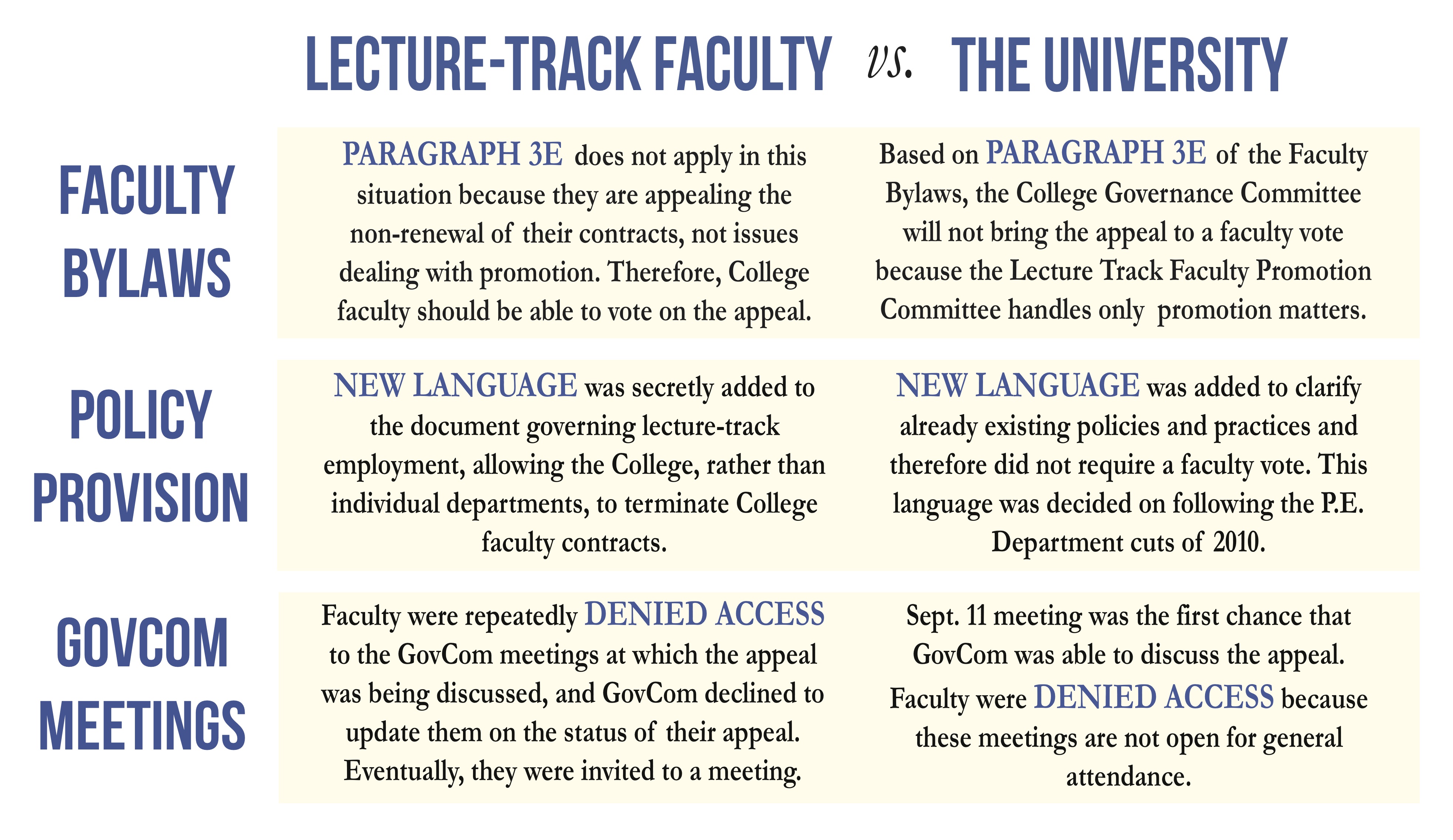 Three lecture-track faculty members are disputing the University’s termination of their contracts resulting from the department changes announced last fall. The faculty claim bylaw violations and unjustified employment policy revisions in several appeals and other documents obtained by the Wheel.

In a Sept. 16 letter to the College Governance Committee (GovCom), a group of 10 faculty claim that a two-paragraph policy provision was secretly added, without a faculty vote, to the document that governs lecture-track faculty employment. They say the change takes the decision of whether to renew the faculty members’ employment out of the hands of that person’s department or program and gives it to the College.

But those responsible for the revision say it was added to clarify already existing practices and did not require a faculty vote. They say the decision to implement the policy provision change occurred in 2011 before the announcement of the cuts – though it did not become a part of the official “Appointment and Review of Lecture-Track Faculty” (ARLTF) document until last summer and was not changed online until after the cuts were announced.

“With all of these documents, we try to wait until we have a series of such changes and then update them periodically,” Michael Elliott, senior associate dean of faculty, told the Wheel.

The policy at the heart of the controversy, available online in the ARLTF document, reads: “The department or program will be asked by the College early in the fall of the reappointment year whether the position should continue to be supported. If the answer is affirmative, and if the College plans to continue supporting the position, the review of the faculty member proceeds over the academic year, concluding by or near April 1.”

The three lecture-track faculty members, along with seven petitioners, said in their statement to GovCom that the phrase “and if the College plans to continue supporting the position” was not in the ARLTF document at the time the lecture-track faculty signed their employment contracts in 2010, nor when the department changes were decided on, according to the statement to GovCom.

The Lecture Track Faculty Promotion Committee, a “standing committee” of GovCom, cited that phrase in its rejection of an appeal that the lecture-track faculty filed in the spring over their position cuts. GovCom cited that same provision as a reason for preventing the appeal from going to the full College faculty vote at the next faculty meeting.

The three lecture-track faculty who will be losing their jobs include David Armstrong and Sheila Tefft, senior lecturers in the Journalism program; and Vera Proskurina, senior lecturer in the Department of Russian and East Asian Languages and Cultures.

In their letter to GovCom, the appellants and petitioners wrote, “Certainly, neither the appellants nor any other lecture track faculty should be bound by provisions that were secretly added to the terms of their employment without faculty knowledge or approval.”

However, Senior Lecturer of Music Theory Kristin Wendland, who was formerly a member of the Lecture Track Faculty Executive Committee – an elected group that represents the entire lecture-track faculty – wrote in an email to the Wheel, “I think it is important to understand that nothing changed in policy or practice, but rather the whole process became more clear and specific.”

Therefore, Elliott said, a College faculty vote did not have to take place. Chris Beck, a professor of pedagogy in the Department of Biology and a former member of the Lecture Track Faculty Executive Committee who was also involved in the decision, wrote in an email to the Wheel that discussions about adding new language to the policy arose in 2010 after the College decided not to renew the contracts of several faculty members in the Department of Physical Education and Health. He wrote that in the aftermath of the P.E. cuts announcement, some lecture-track faculty “requested clarification” about existing policies and practices related to the reappointment of lecture-track faculty.

“The change in language was to clarify the timing of the process and the steps in the process,” he wrote.

Meanwhile, the faculty statement to GovCom says the metadata for the PDF version of the ARLTF posted on the University’s website indicates that the file was “created” July 18, 2012, with the author listed as “slee05.” This is the University ID for Susan Lee, the executive assistant to College Dean Robin Forman.

Lee said in a brief interview that she did not have much to say about the situation, other than that she was simply doing her job by uploading the document. Elliott said many documents online might list Lee as the author for that reason. Documents shown during the presentation at the lecture-track faculty presentation Tuesday also say that the changes to the ARLTF did not appear on the University’s website until September 2012 after the cuts were announced.

While the faculty who signed the letter to GovCom maintain that the language was quietly added without a vote, Elliott said “there’s nothing to hide.”

“What was not clear in the previous version was when that support needed to be expressed,” Elliott said. “By adding this wording, nothing has changed about how lecture-track faculty are reappointed and promoted.”

In the spring, once the Promotion Committee rejected the lecture-track faculty’s appeal over their employment terminations, the appellants filed a petition to appeal the committee’s decision, garnering more than 25 signatures. Under Section 3 of the bylaws, this should bring the appeal before the College faculty for a vote.

But GovCom decided at a Sept. 11 meeting that appeals of Lecture Track Faculty Promotion Committee decisions, like this one, are “specifically excluded by the bylaws,” according to a Sept. 13 letter from GovCom to the appellants. Therefore, GovCom said in the letter, the appeal should not go to a vote.

GovCom Chair and Associate Professor in the Department of Physics Keith Berland told the Wheel that, under the bylaws, appeals of certain “standing committees” such as the Lecture-Track Promotion Committee are not allowable.

Section 3e of the Faculty Bylaws does exclude faculty votes regarding the actions of the Lecture Track Faculty Promotion Committee “on matters of promotion.” Berland said that based on the bylaws, the committee only handles matters of promotion and therefore, “what the Lecture-Track Faculty Promotion Committee does is not appealable,” Berland said.

But Armstrong said he and the other faculty are not appealing promotion matters. Rather, he said, they are appealing the non-renewal of their contracts, which are “entirely different things,” and a faculty vote would consequently be needed.

“The [Promotion Committee] itself, in its response to our appeal, affirmed that it was the correct committee to handle such issues,” he said. Moreover, despite GovCom’s contention, the Lecture Track Faculty Promotion Committee does more than just review promotions, including such things as developing the language that was properly added to the ALRTF last year by faculty vote, and those things are appealable.

“The bottom line is that this is not GovCom’s issue to decide,” Armstrong added. “Its only responsibility in this matter is to put the appeal on the agenda for the full faculty to review. By failing to do so, GovCom is in violation of the bylaws.”

According to the minutes of the meeting, all but two GovCom members voted in support of a motion to bring the appeal to a faculty vote, with one member voting against and one abstaining. College Dean Robin Forman, who has been at the center of the department changes since last September, was present at the meeting and pointed out that the two unsupportive votes came from an appellant and a member of the Lecture Track Faculty Promotion Committee.

While the minutes say both faculty members ultimately “recused” themselves from the vote, Kevin Corrigan, the appellant and the director of the Institute of Liberal Arts, disputes the claim as it applies to him, according to a note in the minutes.

The three tenure-track faculty who will be losing their jobs gave a presentation at a lecture-track faculty meeting Tuesday, in which they showed documents – including email exchanges between Armstrong and those who implemented the employment policy change – to those in attendance to allege that the University violated bylaws in terminating their contracts.

The meeting was intended to focus on an “Emory boot camp” on University structure, as well as a “meet and greet” and a brief update on the appeal, according to an email sent by Lisa Dillman, senior lecturer in Spanish, to lecture-track faculty Sept. 15.

During the discussion of University structure, Armstrong raised concerns over the way in which the changes to the rules were made.

In response, Elliott said, “There are no formal guidelines for who changes either the guidelines on the appointment or reappointment of lecture-track faculty or for that matter the tenure-promotion guidelines.”

On Wednesday night, the three lecture-track faculty members also met with GovCom during a scheduled GovCom meeting to state their case. There, members of #EmoryCuts, the student-led group that has been protesting the department changes since last fall, attempted to speak with Berland and Forman.

The Wheel was denied entry into the meeting because it was closed to the public.

In a YouTube video posted by the EmoryCuts account, Roger Sikes (’12R) approaches Berland, introduces himself and says he “has questions about the Faculty Handbook and the alterations that were made.” On some references, Sikes refers to the “Gray Book,” though the provision changes were made to the ARLTF.

Sikes proceeds to describe the provision alteration as “fraud,” to which Berland responds, “You’re going a little bit farther than I think is reasonable to discern ‘fraud’ when there’s no demonstration of that.” He tells Sikes he would prefer to schedule a time to speak with him outside of the GovCom meeting. Sikes also approaches Forman, who tells him that GovCom is about to start a meeting to which Sikes is not welcome.

“It’s remarkable that you seem so concerned about process and yet you seem so willing to violate it when it’s to your convenience,” Forman responded. “…This is not a meeting that is appropriate for your attendance.”

After the meeting, Armstrong said GovCom “heard us out. They asked questions, we exchanged ideas.” He clarified that he and the other faculty attended the meeting not to argue the merits of GovCom’s decision but to express their opinion that the College faculty should be able to vote on the appeal under the bylaws.

GovCom is currently in the process of deciding whether faculty will vote on the appeal at a future faculty meeting, according to Berland.

Additionally, in its statement to GovCom, the lecture-track faculty wrote that GovCom “explicitly denied” appellants’ requests to attend its meetings and declined to update the appellants as to the status of discussions about their appeal.

In GovComm’s letter to the appellants, they wrote that the Sept. 11 meeting was “the first opportunity for the committee to review the appeal.” Berland said these meetings are “not open for general attendance.”

Berland said the committee sent a response to the appellants only two days after GovCom convened to discuss the issues and then invited the faculty to their next meeting. GovCom will continue the discussion at its next meeting, he said.

– By Jordan Friedman and Dustin Slade