Almost all of Emory’s lecture halls, libraries and laboratories are now barren. Buildings that were once bustling with students and faculty coming to and from class are now eerily quiet. Despite the harrowing situation the U.S. is in — embroiled in a bitter fight against the novel coronavirus — education must continue. As students upheaved their belongings and lives from campus and hunkered down for the remainder of the semester at home, University faculty scrambled to adjust their curriculum, expectations and personal lives to accommodate a pandemic-induced online learning environment.

Some faculty members have created completely new assignments in an attempt to circumvent the online barrier, while others have instead rectified their grading rubrics to account for student hardships. A whole new pedagogical system later, Emory faculty can all agree on one thing: though the circumstances have presented unfair and frustrating challenges, they are surmountable, and the Emory community is doing its best to persevere.

The pandemic has impacted all academic departments differently. For visual arts faculty, curriculum and expectations based on physically creating art have changed drastically, causing some to think of creative ways to engage their students.

Visual Arts Lecturer Dana Haugaard’s classes were in the midst of a hands-on project making plaster molds when students adjourned for spring break. When students were told to evacuate campus, Haugaard created a new assignment that required universally accessible supplies — elements of nature such as sticks and stones.

Prior to the online transition, the integrated visual arts co-major included many studio-based classes with lectures and technical demonstrations. Faculty would often peruse the studio while students worked on their art, disseminating appropriate criticism and instruction to students where needed.

Although the curriculum changes have been unconventional for art classes, Haugaard recognized that the need to stay home and interact with others as little as possible may spark some artistic flame.

“Times like these were made to make art,” Haugaard said. “When you’re … stuck in one place with too much time in your hands, it’s nice to use art to reflect on these circumstances.”

Similar accessibility challenges were presented to those in the music world. Three international students in piano studies classes did not have access to a piano, so Director of Piano Studies Elena Cholakova reached out to the Steinway Piano Gallery in Alpharetta, Georgia. After a few phone calls, the gallery offered to lend the three students weighted keyboards, a close substitution for an acoustic piano, free of charge. 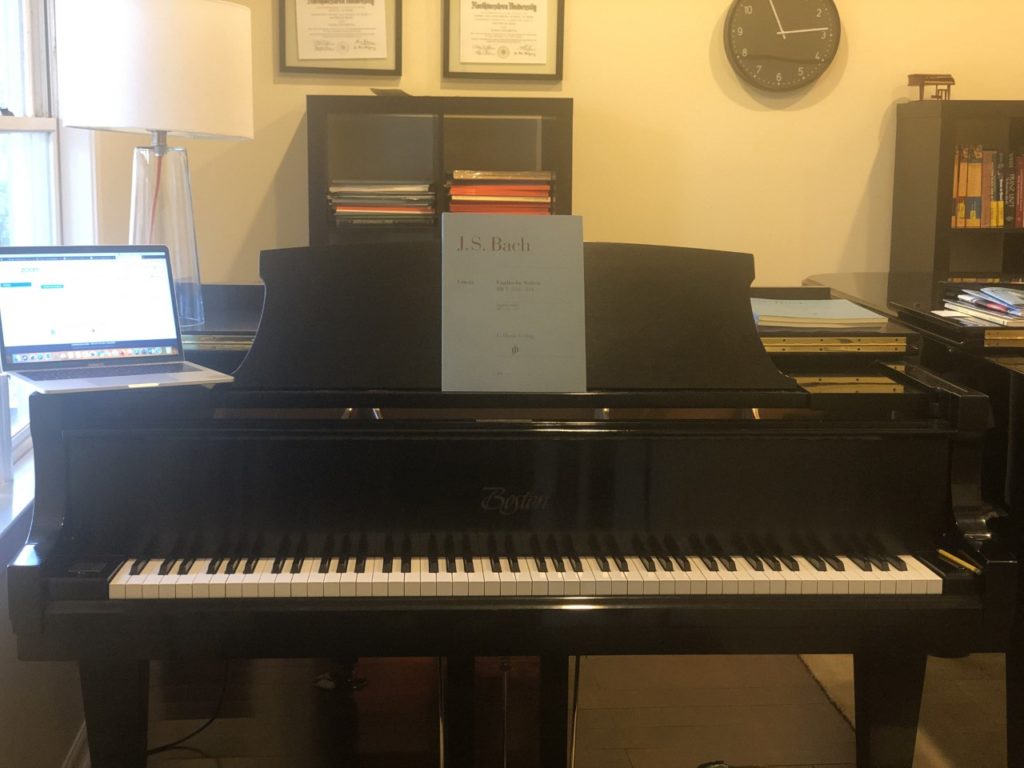 In her role, Cholakova currently coordinates many private lessons. At Emory, piano studies majors receive at least 12 private lessons per semester, as well as lectures on theory, history and elective topics. These lectures and private lessons have transitioned to Skype and Zoom.

Due to the need for social distancing, many students have lost opportunities to perform their craft. Elizabeth Sun (21C) and Sydney Chung (21C) had to cancel their solo recitals that were scheduled for April 5 and April 19, respectively.

Additionally, the Georgia Music Teachers Association (GMTA) piano competition that was scheduled for March 28 and 29 was first canceled and then transitioned to a video competition. Six piano majors had been intently preparing for the competition, which required three pieces from different eras, amounting to approximately 30 minutes of playing.

Sara Wang (22B), who won the Georgia division of the Music Teachers National Association (MTNA) Young Artist Performance Competition last year, had been preparing a new piece for the competition. When the GMTA competition changed its rules and moved the deadline up to March 15, Wang was not able to return to campus on time to record her new piece and resorted to using old recordings from the MTNA competition.

“It was such a pity that I could not record my newly learned piece,” Wang wrote in an email to the Wheel. “It definitely reduced some of the excitement.”

Due to the inability to perform live, faculty have removed performances from students’ final grade. Cholakova stated that the most unfortunate loss is the inability for students to participate in something they enjoy for the time being.

Though more concerned about the chords of a circle than a song, the Department of Mathematics has also endured fundamental pedagogical changes.

The Department has allowed faculty to take the reins on their individual course curriculums, but has encouraged faculty and teaching assistants to continue synchronous Zoom class and office hour sessions. Additional asynchronous material, such as worksheets and videos, may also be incorporated into the curriculum.

“I think that’s the main challenge — connecting the audio with the visual,” Ettinger said.

In terms of formal examinations, Ettinger said that faculty have considered various solutions. In her three classes, including “Mathematical Statistics II With Writing,” Ettinger will give take-home exams and allow students to consult their notes and textbooks. Faculty have also considered oral exams, in which students would meet virtually with their instructors and answer test questions live.

A vastly different academic field — the English Department — has also allowed faculty to personalize their remote learning systems, while also maintaining the use of Zoom and Canvas.

English Professor James Morey has decided to record his lectures and PowerPoints, which students can view asynchronously on their own time. During synchronous Zoom sessions, he leads and encourages student discussion about his uploaded lecture content.

Morey said he considers being able to use the entire class time for discussion one of the most beneficial advantages of online learning. He acknowledged that such a benefit also comes at the downside of being unable to interact with students during lecture and further elaborate on certain difficult topics.

“One of the biggest challenges is . . . digressions don’t work,” Morey said.

Morey also noted that many of his international and West Coast students may struggle to attend Zoom sessions due to time zone differences, and therefore miss valuable discussion time.

Morey is willing to work around students’ schedules. He believes that by offering Zoom session recordings and online office hours, students can make up for missing out on student discussions.

As for assessments, English classes have been relatively unaffected, as most professors will continue to utilize essay assignments. Final examinations will be slightly different — in Morey’s case, the professor will offer a take-home exam with a timed window of 48 hours.

“I will just make it open-note and expect higher quality,” Morey said.

Though Morey acknowledged the many weaknesses of online learning, he is optimistic that the Emory community will make the best of the situation.

“All Emory faculty members are very aware of how difficult and unfair this whole situation is, especially for the students,” Morey said. “Everyone … is working very hard to mitigate the downsides.”