‘Everything Everywhere All at Once’ is a frenetic, hallucinatory masterpiece 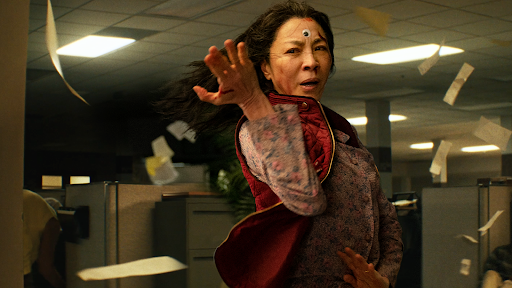 Evelyn Wang’s (Michelle Yeoh) life is falling apart. She is the middle-aged proprietress of a southern California laundromat under audit by the IRS. Her family in China disowned her for running away to the U.S. with her husband, Waymond (Ke Huy Quan), who is now filing for divorce. She feels incapable of understanding her daughter Joy (Stephanie Hsu), who wants nothing more than to get away from her mother. She is convinced, in short, that she can’t do anything right. One can only imagine her surprise when a Waymond from another universe appears during a visit to the IRS and reveals that the entire multiverse is in danger, and she is the only one who can save it. What follows is a senses-shattering plunge into chaos, and one of the best movies to come out in years. “Everything Everywhere All at Once” is a masterful exercise in joy as an act of courage, vulnerability as a way to heal and absurdity as a vehicle for emotionally powerful storytelling.

It’s undeniable that “Everything Everywhere” draws heavily on existing science-fiction tropes: the heroine who thought she was just average, the multiverse at stake and the ability to conjure powers through drawing on other lives. And yet, the film is without a doubt the most audaciously original work to hit theaters in years. Though it is a postmodern mashup with far-ranging influences from Wong Kar-Wai to “Ratatouille” (2007), borrowing genre conventions from science fiction, kung fu/action and comedy, “Everything Everywhere” feels fresh and vital, like an injection of pure energy and creativity that mainstream film has been lacking for so long. Some scenes had the audience howling with laughter at one moment and holding back tears the next, as moments that seem ridiculous on the surface carry a devastating emotional impact.

Directors Daniel Kwan and Daniel Scheinert (known together as “the Daniels”) combine an outrageously original story with daring production to produce an experience truly unlike anything prior. Their fluid and dynamic camerawork takes full advantage of new technologies in a way that doesn’t make each scene feel like a computer-generated product, but rather a piece of art that defies limitations. The use of montage throughout the movie is stunning. For example, toward the beginning, Evelyn sees her life and her choices play out in front of her eyes. Through the Daniels’ masterful use of montage, we get a nuanced picture of Evelyn’s hopes, regrets and fears, all within only a few minutes. The film moves through its two and a half hour runtime at a breakneck speed but rarely feels overwhelming or tiring. Every productional aspect of “Everything Everywhere All At Once” is brilliantly done, from the surreal lighting to the way the production and set designers portray an ever-deteriorating multiverse. 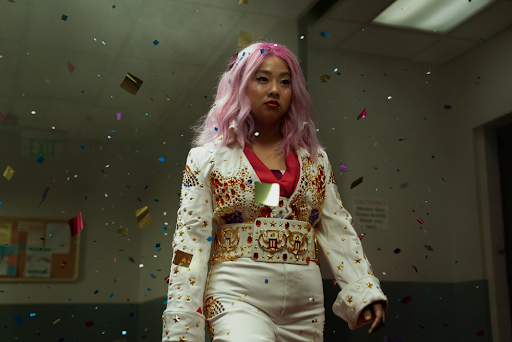 “Everything Everywhere” is driven by its characters, and the film wouldn’t be nearly the success it is without its incredible cast. The linchpin being, of course, Yeoh. She delivers a career-defining performance as Evelyn Wang, who she portrays as a flawed human who loves the people around her but hates her life, daydreaming about who she could have been. While Yeoh’s performance is monumental, she is lifted further by the rest of the cast. Notably, Quan roars back onto the screen after 20 years, his last notable role being that of 14-year-old Data from “The Goonies” (1985). The role of Deirdre, an IRS auditor, is one of Jamie Lee Curtis’ most audacious characters to date. Last but not least, Hsu, despite her limited acting experience, portrays Joy with a complexity that arises from the intersection of love and hatred for those who raised you.

Though the film adheres to no limits in its exploration of the human experience, two main themes emerge over the course of its runtime. One relates to the immigrant family dynamic of its main characters — a complete lack of understanding permeates every interaction that Evelyn has with her father, husband and daughter. The film doesn’t present a solution to the complex, generational disconnects and anxieties that shape such a dynamic; in fact, it suggests that a solution is not always possible. Still, the movie also indicates that simply reaching out with compassion and acknowledging one’s own shortcomings is a good place to start.

The other major thematic concern of “Everything Everywhere All at Once” is a rejection of nihilism. Jobu Tupaki, the primary antagonist, experiences every universe in existence simultaneously. She believes that nothing matters because everything is chaos, and when anything positive is born from it, it is only a momentary reprieve. When Evelyn also obtains these omniscient abilities, she too begins to believe that nothing matters. However, through her relationships, she realizes that seeking out and living in moments of meaning makes life worth living. “Then I will cherish these few specks of time,” Evelyn tells her daughter, “Of all the places I could be, I just want to be here with you.”

“Everything Everywhere All at Once” puts forth a beautiful, poignant proposal for audiences watching the movie in the midst of global unrest: responding to fear and uncertainty with love is not naive, it is a conscious and immensely powerful choice. 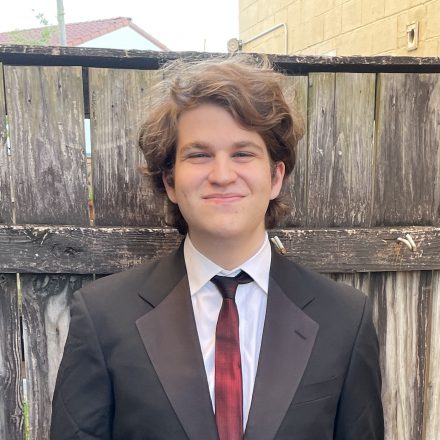