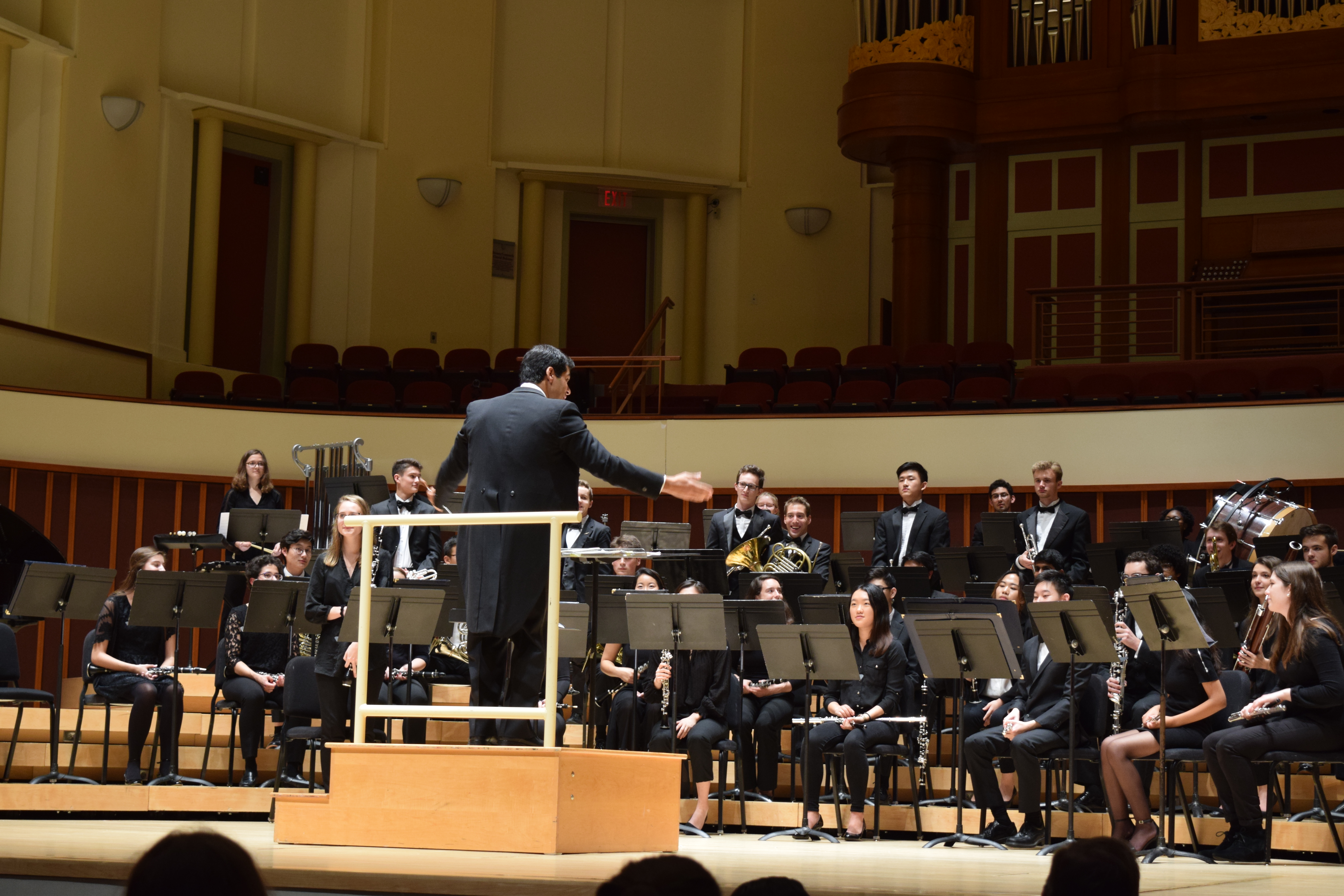 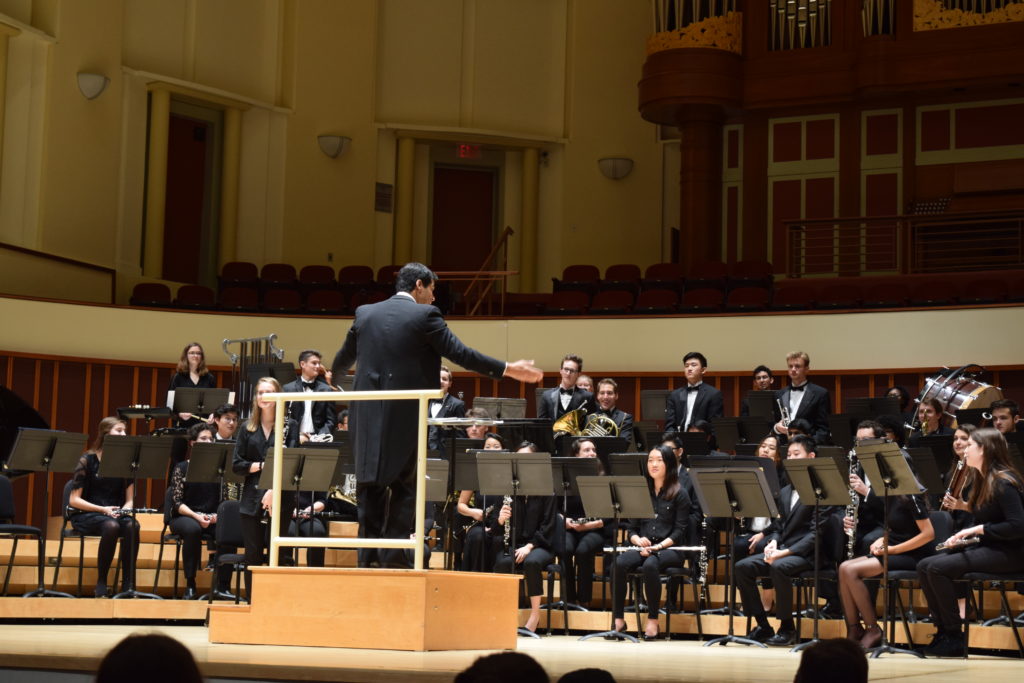 On a dull and dreary Saturday evening, hundreds of students and community members gathered in the Cherry Logan Emerson Concert Hall to witness the Emory Wind Ensemble and Symphony Orchestra perform their annual Fall semester concert on Dec. 1. Despite the bleak and rainy weather, the bands managed to light up the concert hall with their brilliant, awe-inspiring performances.

The concert began promptly at 8 p.m. with conductor Paul Bhasin introducing the night’s guest conductor, John Lynch. Lynch works at the Sydney Conservatorium of Music in Australia, and is the former director of bands at the University of Georgia, as well as a former member of Emory’s faculty, according to the event program.

Lynch conducted the first two pieces that the wind ensemble performed: Jess Turner’s “Through the Looking Glass” and Morton Gould’s “Ballad for Band.” The ensemble exhibited an incredible amount of precision in their playing. The first piece, “Through the Looking Glass,” is based on Lewis Carroll’s novel of the same title, and was a grandiose and thrilling fanfare. The way the different sections of the ensemble ebbed and flowed was enticing. The percussion section was especially captivating, with beautiful xylophone glissandos and snappy snare drums.

The next piece, “Ballad for Band,” was more subdued but equally well done. Again, every section truly stood out in their own way, from the beautiful flute melody that opened the ballad to the marvelous french horn solo that occurred later on. The English horn and low brass sections were noticeably exceptional as well, as the English horns carried some of the most compelling parts of the melody and the droning low brass added density to the lower register. The trombone section added a nice variation in timbre to the mix, and the piece was beautifully executed.

Bhasin, the band’s usual conductor, took over for the third and final piece, Alfred Reed’s “Russian Christmas Music.” Following the typical nature of Russian Christmas music, Reed’s work was noticeably darker and had a more melancholic tone than the works that preceded it. Still, there was a great deal of beauty to be found in the ensemble’s adaptation. The piece heavily featured the English horn and clarinet, but still had plenty of brass featured in the lower registers. There were occasionally upbeat moments in the piece as well, especially whenever the bells chimed in. The piece didn’t bring the holiday spirit that’s typically associated with Christmas music, but that was no fault of the performers.

After the wind ensemble’s performance, the symphony orchestra had much to live up to. Luckily, following a brief intermission, the group brought just as much talent and precision to the stage. The orchestra only performed two pieces, Jean Sibelius’s “Karelia Overture” and Nikolai Rimsky-Korsakov’s “Capriccio Espagnol.” Given that the orchestra is significantly larger than the wind ensemble at around 90 members, they brought even more auditory power to their concert.

The orchestra sections harmonized beautifully on “Karelia Overture,” with lots of massive crescendos adding a dazzling dynamic contrast to the performance. There was always a lot going on with all the different instruments bringing a variety of melodies and timbres, but it remained a remarkably cohesive overture. I was enthralled with the piece from start to finish thanks to the orchestra’s electrifying presence.

“Capriccio Espagnol” was broken up into five distinct movements, each bringing a different sound and style from the last.

The pace really began to pick up in part four, as this movement was introduced by a snare drum playing rapidly. Aside from the change in tempo, the best part of this passage was the gorgeous harp solo, accompanied beautifully by the twinkling bells in the background. Part five was a truly epic finish to the piece, as every section was played with incredible power. It was easily the loudest moment in the concert, and one that exhibited an astonishing amount of talent from a group of student performers.

Following the final note, the crowd immediately broke into a thunderous round of applause, with many giving the orchestra a well-deserved standing ovation. From the night, the stand out piece was the orchestra’s second, “Capriccio Espagnol.” My one complaint is that I think they could have picked a better Christmas piece or medley than “Russian Christmas Music,” but overall it was certainly a performance that I won’t forget any time soon.

Correction (12/7/18 at 12:07 p.m.): A previous version of the article incorrectly stated that there were more than 50 students in the ensemble. There were actually no more than 44 students on stage at a time. The article was also corrected to better reflect musical terminology and that English horns were played, not oboes.