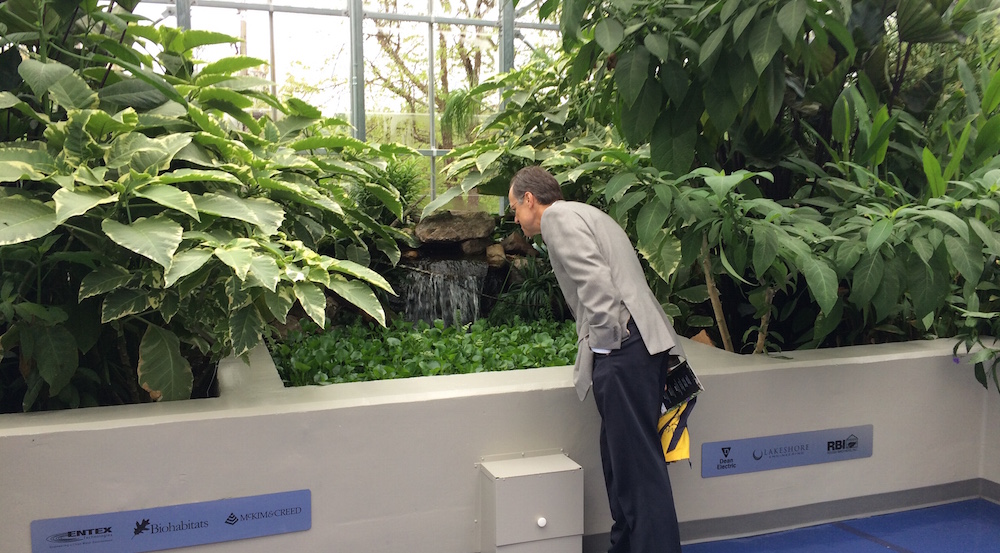 University President James W. Wagner and other Emory administrators celebrated the opening of a new water recycling facility last Friday in the parking lot behind Sorority Village that will reduce costs and Emory’s dependence on local water sources.

“It is one of the things that makes me feel so proud about Emory,” said Karen Salisbury, chief of staff and director of Customer Relations and Support for the Division of Campus Services. “This has the potential to change the water environment in the world.”

The WaterHub is the first plant of its type to be used in the United States, according to Matthew Early, vice president of Campus Services.

The WaterHub repurposes approximately 400,000 gallons of waste water per day that Emory can use in heating and cooling systems as well as toilet systems across campus. The facility is expected to save Emory millions of dollars in water utility costs over the next 20 years, according to a WaterHub report. In effect, it will reduce the strain on the local water system, according to Early.

Enclosed in the glass geometric structure are large hydroponic pools in which plants and microorganisms constantly filter water. The waste water that enters the WaterHub is cleaned through the natural biological processes of the plants and microorganisms inside the building. Last year, Emory constructed pipes to connect the WaterHub to Raoul Hall. This will allow the retreated waste water to be used in the building’s toilets once the University receives a permit.

“Everybody wins,” Early said of the situation created by the WaterHub. This project allows Sustainable Water, a leading provider of water reclamation and reuse solutions, to make money, allows Emory to buy water at a reduced price and reduces the strain on DeKalb water resources, according to Early.

Sustainable Water, the company behind the technology inside WaterHub, saw the project as a simulation of sustainable wetlands, as the biological processes that occur inside the WaterHub occur naturally in wetlands, he said.

Emory’s only involvement in the project is that the University will purchase the water produced by the facility, as a part of an agreement with Sustainable Water and the Atlanta-based construction firm Reeves Contracting Company, according to Early. The risk essentially falls on the contractors because Emory is simply buying the water they produce, Early said.

The WaterHub-produced water is less expensive than the water that DeKalb County provides, Early added.

According to Douglas Hooker, executive director of the Atlanta Regional Commission, Atlanta is the largest metro area in the United States that relies on the country’s smallest watershed, in part because Atlanta has a relatively high elevation and is at the edge of six river basins.

“Other than people, our most precious resource is water,” Hooker said.

The Atlanta community must continue to take steps, such as the construction of Emory’s WaterHub, to enhance sustainability of long-term resources, according to Hooker.

Water created by the WaterHub is not potable by U.S. standards, but in other countries, the water meets potable water standards, according to Salisbury.

“The WaterHub clearly demonstrates how recycling waste water and appropriately reusing it will extend our resilience and free up water for future generations,” Hooker said.

Salisbury added that Emory is breaking ground with this new technology, but she acknowledged that Emory won’t be the only institution to have this technology in the near future.

“The benefits of this project are not theoretical or abstract,” Hooker said. “They are very real, they are very measurable and they are very immediate, leaving no doubt of the beneficial impact sustainable practices can have on our water system.”

While the WaterHub has the ability to make water, it also serves as an academic opportunity for Emory 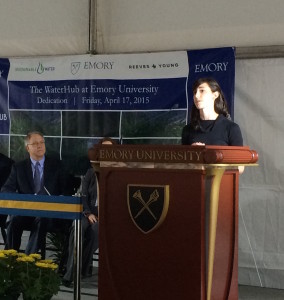 Gloria Sclar, a second-year student at the Rollins School of Public Health, helped lead a semester long project in which students could test water quality from different sections of the WaterHub to determine how effective the cleaning process was. According to Sclar, students can apply this field technique in their future careers.

“What was exciting was just how invaluable the WaterHub was for our coursework,” Sclar said. “It is a tool for students to make applied connections.”