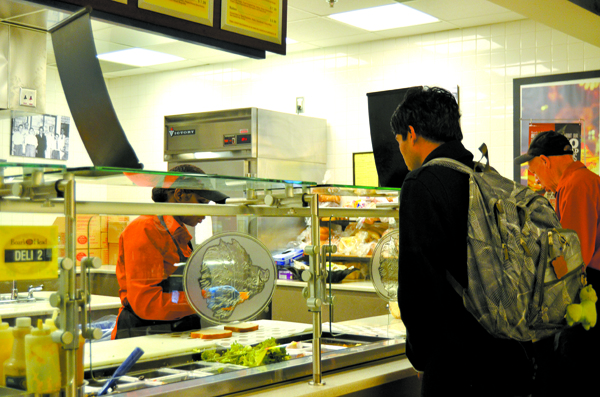 College senior Conor Kelly wishes there was a Korean barbecue food venue on campus. College junior David Stess wants a location in Cox Hall that serves pasta, similar to the Rollins CafÃ©. And for months, members of the Lesbian, Gay, Bisexual and Transgender (LGBT) community have been calling for Chick-fil-A’s removal.

For those students who have wished for different dining opportunities at Emory, they may now be in luck.

The Division of Campus Life and Emory’s food-service provider Sodexo will begin evaluating retail dining brands and venues on main campus this semester in an effort to satisfy the preferences of the University community.

In collaboration with Food Advisory Committee Emory (FACE), Campus Life and Sodexo will review in 2013 all of the current food choices in the Cox Hall food court, as well as Einstein Bros Bagels in the Goizueta Business School and Miss Jean’s Place at the Emory School of Law. Other food locations around campus will undergo evaluations in the upcoming years.

“Both Emory and Sodexo recognize the need to constantly evaluate dining brands and venues to be sure those offerings are meeting the needs of the campus community,” Furhman wrote in an email to the Wheel, adding that that it is too soon to know exactly when specific changes will take effect.

Dean of Campus Life Ajay Nair wrote in an email to the Wheel that the timing of the process’ launch is ideal following what he described as “the culmination of healthy discussion” regarding Chick-fil-A’s presence on Emory’s campus last semester.

“Through [dialogue over Chick-fil-A], we also learned that a re-visioning of dining at Emory could foster a separate, positive community change, while addressing students’ concerns around their dining experiences,” Nair wrote.

The chain restaurant will undergo the same review process as the other venues on campus.

The Process of Evaluation

FACE will conduct the first steps in the process, which entails gathering information on the Emory community’s food preferences through surveys and open meetings.

“It’s a blank slate that we’re starting with, and we’re evaluating all places equally,” College sophomore and FACE Co-Chair Michael Sacks said. “They’re all on an equal playing field as of right now.”

In addition to survey data, FACE will assess existing and future retail venues and brands based on menu variety and flavor profiles, menu quality, brand commitment to sustainability, brand ethos and consistency with Campus Life core values, and business and financial considerations.

Venues that could help Emory reach its sustainability goals are also a priority in the initiative.

“In an ideal world, we’ll have a good balance between expensive and inexpensive foods, healthy and indulgent foods, and fast and maybe slower foods,” Sacks said. “We want Cox to please everyone. It is our goal to make the student body happy.”

Nair specified that the progression of re-visioning Emory Dining began last spring and has continued since Furhman joined the Division of Campus Life in January.

“A visionary dining program – one that is both ambitious and innovative – is always reengineering itself in order to reflect the changing tastes and attitudes of its customers: our students and community members,” Nair wrote in an email to the Wheel.

Potential new venues are “really open to just about anything,” Sacks said, so long as they fit the criteria. Sacks said new options could include local chains in Atlanta or Sodexo’s own brands, like Mein Bowl and Dooley’s Burgers and Fries in Cox Hall.

Yost said Sodexo sometimes provides its own brands because of its diverse customer base. Sodexo chooses restaurants for campuses based on feedback from customers.

B-School sophomore and FACE co-chair Katherine Porcello specified that Miss Jean’s Place at the law school – which offers sandwiches and wraps – is undergoing review, in part, because it “isn’t really living up to what people want.”

And Einstein’s at the B-School, Sacks said, doesn’t allow much flexibility in terms of offering foods during times when there are fewer students on campus, like the summer.

“During those times, it’s all or nothing, and we’ve been choosing nothing,” Sacks said. “It’s not a very good use of that space.”

Chick-fil-A in the Cox Hall food court has been the subject of debate and discussion on campus since Dan Cathy, the president and CEO of the company, publicly revealed during the summer his opposition to gay marriage and company donations to anti-gay organizations.

Members of the Lesbian, Gay, Bisexual and Transgender (LGBT) community formed a committee calling for Chick-fil-A’s removal last semester and held a protest to voice their concerns in October.

In a Dec. 17 statement, Nair clarified that though Chick-fil-A has become a symbol of exclusion for some members of the Emory community, “any decision by Sodexo to renew or not renew the contract with Chick-fil-A, or any other vendor, must be part of a dining vision to advance the purposes for which Emory has contracted with Sodexo.”

The statement notes that Emory will not ask Sodexo to “exclude or retain Chick-fil-A on the basis of Dan Cathy’s public positions.”

“[Nair’s letter] restates our values and what we believe in, and how certain vendors really just don’t fit,” Ahn said.

Still, Nair wrote in his statement that some differences in opinion are truly irreconcilable, and the University must acknowledge opposing views.

The stance of the LGBT committee, though, remains the same.

“Chick-fil-A has made their hostility toward gay people clear,” said Andy Ratto, a fourth-year student in the Laney Graduate School and a member of the committee. “It will be a victory for the Emory community … when they are removed from campus.”

Yost specified that Sodexo has not removed any Chick-fil-A locations at college campuses since the end of the last academic year.

On the Wheel‘s Facebook page, students offered insight into what they’d like to see in Cox Hall. College senior Sunny Porterfield said she wants to see Salsa Rico removed “and replaced with a different Mexican place or something.”

College sophomore Jorvon Carter, meanwhile, would like to see Chick-fil-A replaced with a Burger King or IHOP.

And College junior Kerry McGlinchey hopes for a salad bar with more options – specifically “leafy green vegetables and various types of proteins” – as well as a wider variety of pre-packaged salads.

Porcello and Sacks agreed that though the changes might take a while to be implemented, they will benefit the Emory community in the long run.

“We want these changes to be for the long haul,” Porcello said. “This will be very planned out to please as many people as possible.”

FACE will hold an open meeting about the first phase of the dining evaluations Thursday at 6 p.m. in Cox Hall.