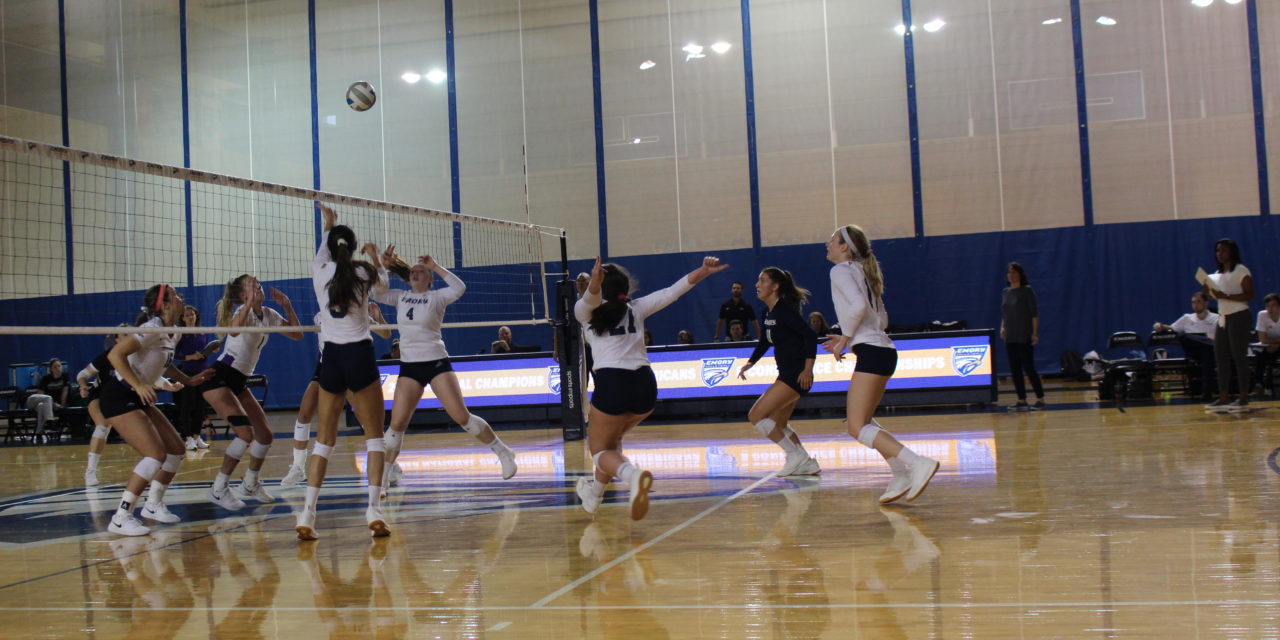 The No. 3-ranked Emory volleyball team won all four of its matches they hosted between Oct. 25 and 27 as part of the Emory Invitational against St. Mary’s College (Ind.), Roanoke College (Va.), University of Wisconsin-Whitewater and Susquehanna University (Pa.). The Eagles improved their undefeated home record to 14-0 and have only dropped a total of nine sets in home games.

Head Coach Jenny McDowell said much of the home success has to be attributed to the atmosphere Emory has generated.

“Our marketing and event staff have done an incredible job making the game day an event people enjoy attending,” McDowell said. “Our crowds have really grown, and I think it makes a big difference.”

Saunders is grateful to be named Invitational MVP but said her mind is only focused on the team’s goals.

“Those awards don’t sum up the excitement of playing in [University Athletic Association] championships or winning Regionals or Nationals or the memorable moments that got the team there,” Saunders said. “Not to be cliche, but winning is all that matters to me.”

Roanoke, similar to St. Mary’s, put up their best fight against the Eagles in the first set and held a slight 17-16 lead. Emory won the next five points and then closed out the set 25-21. The Eagles steamrolled through the next two sets, both ending in 25-14 scores, to complete the sweep.

McDowell utilized a new-look lineup in this match in which many younger Eagles received opportunities alongside a few experienced veterans. Freshman middle hitters Katie Hulme and Kirwan Carey, freshman outside hitter Caitlyn Reynolds and sophomore outside hitter Kaia Johnson all recorded career-high kills and combined for 22 of the team’s 40 kills. Much of the veteran production came from senior outside hitter Sara Carr, who lead the team in both kills (11) and digs (14).

McDowell said the team remains successful with any lineup combination due to the consistent effort everyone brings to practice.

“Every single player on this team is vitally important to our overall success,” McDowell said. “Each player brings 100 percent to every practice, and the competitive nature of our gym elevates the level of play for everyone.”

Emory came out the gate swinging in their top-10 matchup against the No. 7 Wisconsin-Whitewater team and took a 10-1 lead early in the first set. The Eagles closed out the first set 25-15 and maintained that momentum with a 25-22 second set victory as well. Eager to prove their No. 7 ranking, Wisconsin-Whitewater stunned Emory with a blowout 25-11 third-set win. The Eagles were able to quickly move on from the third set and regain control with a 24-18 lead in the fourth set. Wisconsin-Whitewater forced a nervy end with four straight points, but the deficit proved insurmountable, and Emory capped off the victory with a 25-22 fourth set.

The Eagles’ trio of hitters with over 200 kills on the season each, consisting of Saunders, McKnight and  sophomore outside hitter Tara Martin, once again dominated and combined for a staggering 43 kills. Senior libero Elyse Thompson led the team in digs, as she has done in 22 of the 25 games this season, with 24, while freshman setter Cassie Srb coupled her 45 assists with 12 digs.

Despite the incredible numbers Martin, McKnight and Saunders have put up, McDowell said other key pieces deserve some praise as well.

“There’s no doubt the three of them are having incredible seasons but a lot of the credit has to go to our incredible passers and our fantastic freshman setter [Cassie Srb],” McDowell said.

Emory’s last match of the Invitational was another top-25 showdown, this time against No. 24 Susquehanna. Five sets were required to declare a winner in a match between two very skilled and competitive teams. Despite taking the first set, the Eagles found themselves down 2-1 in sets and losing 19-16 in the fourth set. On the verge of recording only their third loss of the season, Emory rallied in the fourth set to take it 25-21 and took the deciding fifth set 15-9 to secure the victory.

Saunders said the team welcomes high-intensity, ranked games because they simulate the type of games they hope to win down the stretch.

“Our schedule prepares us extremely well for the conference championships and NCAA tournament,” Saunders said. “Our coaches make sure that we are well prepared to take on these teams and peak at the right time.”

The Eagles will remain at home for the next three games as part of the Emory National Invitational on Nov. 1 and 2.