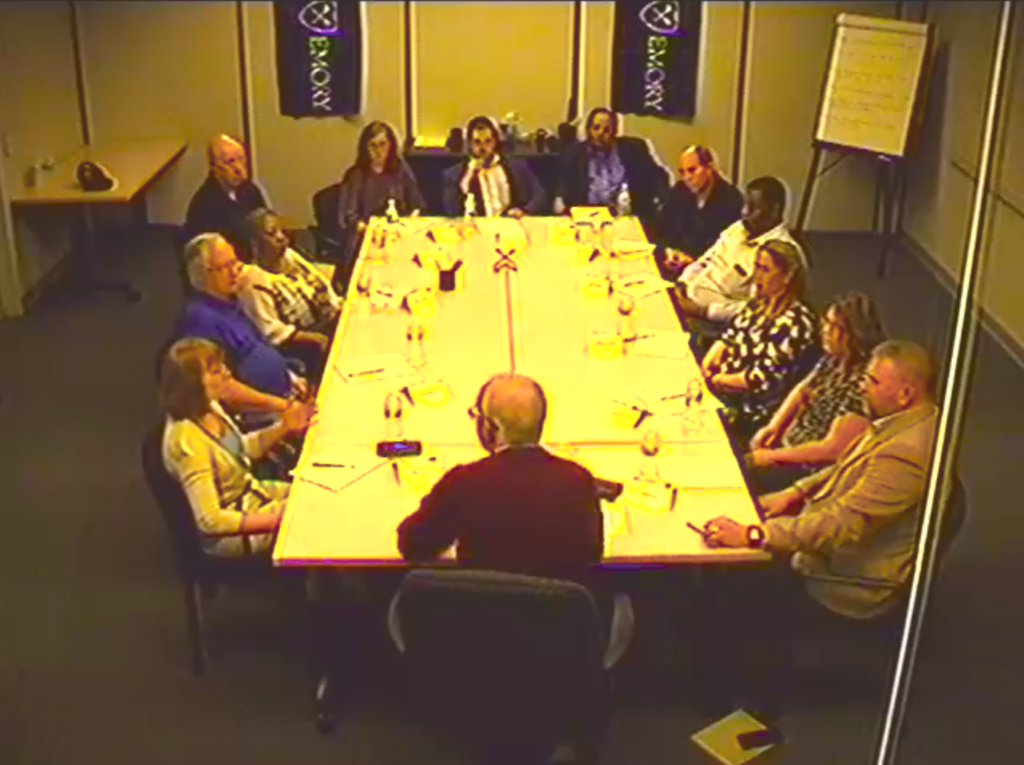 Milwaukee voters painted a largely pessimistic vision of the United States in an Emory-sponsored May 15 focus group, characterizing the nation’s political climate as “tense,” “divided” and “chaotic.”

The focus group, which was conducted to gauge political opinions ahead of the 2018 midterm elections, was the fourth session of Emory’s “Conversations with America” series moderated by NBC News and Wall Street Journal pollster Peter D. Hart. It surveyed 12 Milwaukee voters: four Republicans, three Democrats and five independents.

When Hart asked the participants how they felt about the direction of the U.S. over the past 18 months under President Donald J. Trump’s administration, responses were divided by partisan lines.

Steven Midthun, 54, a school librarian who voted for Democratic presidential nominee Hillary Clinton in the 2016 election, said that he feels like the country is “constantly at war.”

Meredith Legree, 36, a physician’s assistant who voted for Trump, said the current political climate was “hopeful.” She added that she doesn’t believe the president’s intention “is to divide us, but his words are taken that way.”

Although the group admitted that the nation has a healthy economy, the focus group members also discussed low points of the past 18 months in the U.S. For example, an increasing racial divide is hurting the country, said Michelle Price, 52, a clinical research assistant who voted for Clinton.

Betsy Novak, 55, a nursery worker who voted for Trump, admonished the news media for being inaccurate and noncredible. Novak said the media attacks Trump’s tweets, which some members of the group admitted were “childish,” and does not highlight his accomplishments.

None of the participants said they would vote for 2018 congressional candidates based on their support for Trump’s impeachment or their intent to further or inhibit U.S. special counsel Robert Mueller’s investigation into Trump’s 2016 presidential campaign and Russia’s meddling in the election.

Atanu Deb Baruah, 48, a marketing director who voted for Clinton, said it is not relevant to his voting decision whether congressional candidates wish to impeach Trump.

“It’s not about impeachment,” Deb Baruah said. “It’s instead about the individual candidate and whether the policies they advocate for represent my interests.”

Hart then asked the group to give advice to congressional candidates participating in the upcoming elections.

“Worry about how [your policies are] going to be covered in the media, [because] it will always be covered negatively,” said Sam Goldner, 25, a warehouse manager who voted for Trump.

Deb Baruah advised candidates to work for the betterment of the country, not their party.

Carrying out promises made on the campaign trail is important to Stephen Rozmenoski, 66, a machinist who voted for Trump.

Voters were divided by party loyalty when asked about the intent of Mueller’s investigation of potential Russian collusion in the 2016 presidential election. Four of the 12 participants agreed that the main purpose of the special counsel is to “find the facts” regarding Russia’s possible involvement in the election.

Randy Cera, 52, an independent who voted for Trump, said that the investigation was created to alter public opinion.

“[The investigation] has been going on for a year and a half, they’ve found nothing, so there’s nothing there,” Cera said. In fact, there have been 17 indictments and five guilty pleas in connection to Mueller’s investigation, according to the Vox.

Other conservatives, such as Curt Hetzel, 48, echoed Cera’s opinion, pointing to Clinton’s loss as a primary motivation for the investigation.

“They’re looking for anything to indict Trump because people are unhappy with him in power,” Hetzel said.

Democratic members of the group, including Clinton voters Price and Michael Ross, 36, said that the ongoing investigation was important and credible.

“I think that [a firing] would just show that Trump is done with it,” Cera said.

In wake of the Cambridge Analytica scandal and Facebook CEO Mark Zuckerberg’s congressional hearings, Hart asked the focus group whether they believe the government should intervene in private social media platforms to ensure user privacy.

While some voters voiced concerns over their personal information being used against them or potentially ending up in the wrong hands, none said that the government should regulate social media corporations.

“It’s your job to realize that every website you visit, ever, takes your information,” Goldner said. “You should know going in that [social media outlets] are providing you a service for free, they’re obviously going to make money off you in some way.”

Goldner added that social media platforms should regulate themselves and that opening the door to government intervention could potentially become a slippery slope.

Emory is tentatively scheduling another focus group session for late August, possibly in Atlanta, Emory Associate Vice President of University Communications Nancy Seideman wrote in a May 16 email to the Wheel.

UPDATE (5/23/18 at 2:10 p.m.): The article has been updated to clarify that there have been 17 indictments and five guilty pleas in connection to Mueller’s investigation.