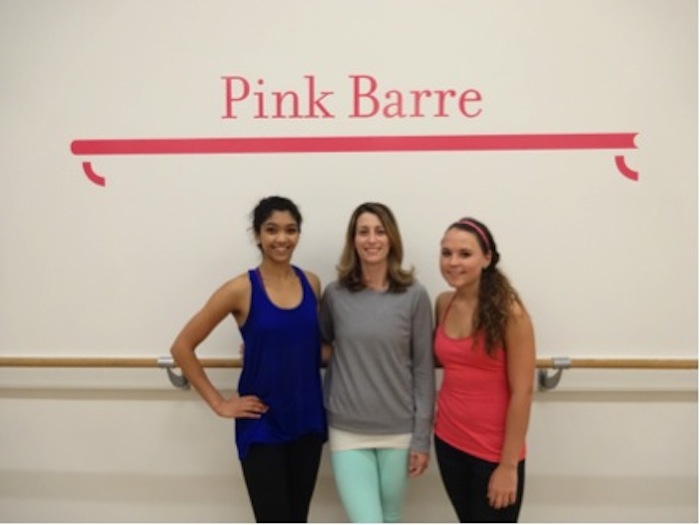 Pink Barre is a barre fitness studio at Emory Point that incorporates Pilates-based combinations, isometric strengthening and yoga stretches into an exercise routine. A barre is a horizontal bar that is attached to the wall at about hip height and is traditionally used for support in ballet classes. In this type of fitness class, the barre is also used for support, but the exercise routine is not based entirely on ballet technique. Some elements of ballet are borrowed, but the majority of the routine is derived from other forms of exercise, such as pilates, yoga and isometric strengthening. One does not need to have dance experience to take this class.

I found the Pink Barre studio to be bright and welcoming. The exercise room is spacious and clean, factors which are extremely important to me, and all clients receive a locker in case they need to set aside their purse or other belongings. Participants wear socks with grips because the floor can be slippery; socks also add an extra element of cleanliness. Before class begins, each attendee gathers a set of lightweight dumbbells (between one and five pounds), a small medicine ball, a resistance band and a hot pink mat.

My class began with a push-up sequence that could be modified in intensity according to the preference of the individual, followed by an aerobic exercise routine that incorporated the light dumbbells. Other elements of the class included wrapping the resistance band around the thighs then pulling one’s legs apart in order to work against the band’s force and engaging in isometric squeezing exercises with the small medicine ball. There was a focus on the alignment of the body, but not as intense as it would have been in a ballet class. However, tucking one’s hips and lengthening one’s ribcage are parts of doing the exercises properly. Yoga stretches afterwards provided an element of relaxation and relief after the intensity of the exercises.

Overall, the barre fitness class was a great experience that left me feeling sore yet satisfied. The class was 55 minutes long, a reasonable amount of time for busy people who don’t have much time to work out, and enjoyable as well – the setting encouraged socializing and the music kept participants energized. Barre fitness was definitely a fun alternative to the traditional exercise class.

Before attending my first barre class, I spoke to Pink Barre’s founder and studio owner, Tara Joiner. She became involved in barre fitness after seeing how barre classes allowed her to strengthen her core and back extensors.

“I was an avid runner but I could not stack my shoulders over my hips. I noticed my posture improved with barre classes,” Joiner said. She mentioned that barre exercises have helped her focus on alignment and develop strength in necessary areas.
Joiner explained how barre fitness classes benefit clients by preventing joint injuries that typically occur from other forms of movement. These exercises are also designed to strengthen muscles through precise and isolated movements that place stress upon them.

Although much of the exercise routine focuses on legs, lightweight dumbbells are incorporated aerobically to tone the arms. Joiner added that barre classes target women’s “vanity” areas, which are the legs, the stomach and the arms.
Joiner said that Pink Barre’s atmosphere gives women a chance to accomplish weight-loss and fitness goals in the company of other women, which results in the creation of a supportive community. I would say barre fitness classes end up being more than just exercise; they provide an empowering haven for women.​