Between 2016 and 2017, Emory built “road and streetscape enhancements [to] improve the patient experience at Emory Healthcare and provide enhanced access for thousands of Emory University and Emory Healthcare staff, students, faculty, patients, and visitors who travel on Clifton Road each day.” These changes included widening the road, installing a slip lane for right turns at the North Decatur Road intersection and adding several aesthetic improvements.

At the time, Campus Services program manager Al Herzog claimed the alterations would improve safety and ease traffic flow. The data shows that, while they may have accomplished the latter, they certainly did not accomplish the former.

According to data from the Georgia Department of Transportation, crashes in the revamped section of Clifton Road increased by roughly 60% between the two years prior to Emory’s “improvements” and the two years following their completion, as shown in the attached graph, going from around 50 crashes per year to 90. Most of the improvements, such as widening the road and adding slip lanes, lead to higher traffic speeds; faster traveling speed leads to more crashes and more severe injuries. Even the Federal Highway Administration has admitted that improvements such as slip lanes, which allow cars to turn right at intersections without stopping, are “a negative facility from the pedestrian perspective due to the emphasis on easy and fast vehicle travel.” 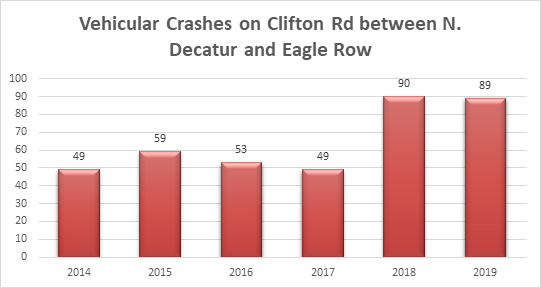 This is emblematic of decisions that promote mere convenience at the expense of safety. Another example is the new multiuse path Emory built in 2019 with the PATH Foundation. The trail’s design prioritizes traffic exiting from parking lots, with signage asking people on foot, bicycles and scooters to yield to the vehicles turning to exit driveways, parking lots and loading docks. The Official Code of Georgia states that vehicles exiting a driveway or parking deck “shall yield the right of way to all vehicles approaching” (which includes bicycles) as well as to pedestrians, so the trail’s signage not only contradicts common sense but also is unsupported by state law. Cars failing to yield have caused crashes in which cars strike people traveling on the path.

In an email to the Wheel, Emory Associate Professor of Medicine Dr. Charles D. Searles Jr. described his experience in one such crash. “I was struck by a car coming out of the Egleston parking deck and turning right onto Haygood Drive,” he wrote. “The collision launched me into Haygood Drive from the bike path.” When Searles followed up with the administration and the PATH Foundation, he learned that “certain planned safety features had not been implemented.”

The PATH Foundation did not respond to a request for an interview about these planned safety features.

This lack of concern for safety is reflected in a myriad of Emory’s other transportation-related decisions. The University has refused to implement additional safety features on Clifton Road. The bike rack design that the University uses on all constructions is explicitly not recommended by the Association of Pedestrian and Bicycle Professionals (APBP) because it does not function in real-world use due to varying bicycle sizes and designs. Emory Police Department also refused to ask drivers parked in the bike lane in front of the sorority lodges on Feb. 21, 2019, to move, in accordance with Atlanta’s ordinances, when I reported them via the LiveSafe app.

The solutions to these problems are clear, and they aren’t new. Some were articulated in a 2013 report for Bike Emory, and others were outlined in the feedback Emory received in response to its 2016 Bicycle Friendly University application.

Emory needs to create a complete streets policy and a bike master plan to prioritize the safety of people walking, biking and scootering. It must provide training to engineering and planning staff to keep vulnerable road users safe; the APBP guidelines would be a good place to start. Administrators should also ensure that all bike racks conform to APBP best practices, create a system to report and resolve transportation-related issues and work with local governments to create safer infrastructure. 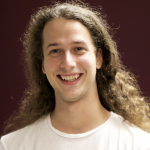 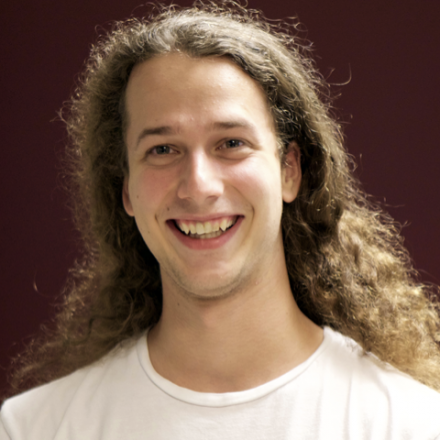 Open your horizons to flourish in nature’s sanctuary