How far will the Emory community go to keep our campus weed-free? In the wake of growing concerns about biodiversity loss and climate change, Emory must evaluate how its herbicide use impacts the health of students, staff and the environment.

Emory must move toward becoming an organic campus, or one that does not use toxic weed killers to manage its grounds. More than this, we need a cultural shift — a rethinking of why we use chemicals and a commitment to thinking about creative alternatives that are not harmful.

Emory administrators must work with the Grounds team, students and faculty to commit to transitioning to organic land management by 2025.

As a fourth-year student, I started Herbicide-Free Emory, a group dedicated to working with groundskeepers to help Emory become herbicide-free. As a chapter of the Herbicide-Free Campus movement, the group is part of a national coalition that works with groundskeepers and administrators all over the country to reduce and eventually eliminate the use of herbicides on school grounds and transition to organic land care.

Currently, Emory follows an Integrated Pest Management (IPM) plan designed by the University of Georgia. According to a March 27 email from Exterior Services Director Jimmy Powell, Emory uses glyphosate-based herbicides in addition to the herbicide triclopyr. Although the grounds team is actively working to decrease their herbicide use, there is little mentioned on Emory’s websites on these steps. The lack of information available to students on Emory’s pesticide use makes it difficult to research or understand how Emory compares with other campuses. There must be more transparency in Emory’s use of herbicides. In continuation with groundskeepers’ strong efforts to decrease herbicide use, administrators must publicly take steps toward creating a campus free of glyphosate and other dangerous herbicides.

The national dialogue surrounding glyphosate is heated. The International Agency for Research on Cancer (IARC) classified glyphosate as “probably carcinogenic to humans.” The IARC found that people exposed to glyphosate had higher rates of non-Hodgkin lymphoma. In addition to cancer, glyphosate has been found to disrupt endocrine functioning, reproduction and development, and kidney and liver activity. Amid growing health concerns, glyphosate has been banned in countries across the globe. Although some other regulatory bodies, including the EPA, have asserted that glyphosate poses no public risk, overwhelming evidence suggests that Emory must nevertheless act to protect its community by disavowing its use.

By eliminating herbicides and transitioning to organic land care, Emory will more consistently meet its stated missions of maximizing sustainability and protecting human health. The shift will have to be gradual, but it is attainable. Herbicides may continue to be used as a last resort for treating invasive species but a big step toward organic landscape management is necessary. Many campuses have already made commitments toward herbicide-free land management, including Harvard University (Mass.), the University of Colorado Boulder, Tufts University (Mass.) and The University of Pennsylvania.

Moreover, this shift isn’t necessarily more expensive than traditional methods. Many campuses have even saved money and natural resources by transitioning to organic practices. Since Harvard began managing its land without any synthetic pesticides in 2009, the resulting 30% reduction in its irrigation needs have saved it 2 million gallons of water every year. Before going organic, Harvard spent $35,000 each year to remove landscape waste from its grounds. That cost is now gone. Today, the school composts all its grass clippings, leaves and branches, which in turn saves the University an additional $10,000 in fertilizer costs.

Additionally, experimenting with organic land care on campus would facilitate new community partnerships and outreach. Emory could work with groups like the Atlanta BeltLine Partnership to convince them to implement organic strategies in their parks. Emory could partner with local schools to teach children what it means to manage landscapes organically. In doing so, Emory could expand its outreach to schools, community centers and other organizations throughout the Atlanta area.

Emory students and faculty can also utilize this project in academic research. From studying the chemistry of soil health to the aesthetics of weeds, this project’s implications are multidisciplinary. Undergraduates, graduate students and faculty alike could use Emory’s landscape as a laboratory as they develop solutions to environmental and sociological catastrophes.

Though a small team, Emory groundskeepers remarkably manage 700 acres to create a beautiful landscape. Managing the entire campus organically would require additional more labor and resources than the grounds team currently has, but with the help of changes in policy, proper training in organic methods, and the implementation of student weeding workdays, the transition to an herbicide-free campus can begin.

Together, the Emory community can continue to lead in environmental management, public health practices and student engagement. A strong commitment to evaluating our herbicide use will bring success to the university on a national scale and bring increasing depth to its academics, research and campus life.

We must prioritize the health and safety of the groundskeepers, students, staff and faculty on our campus instead of weed-free sidewalks and lawns. I urge you to join me in advocating for a herbicide-free Emory. 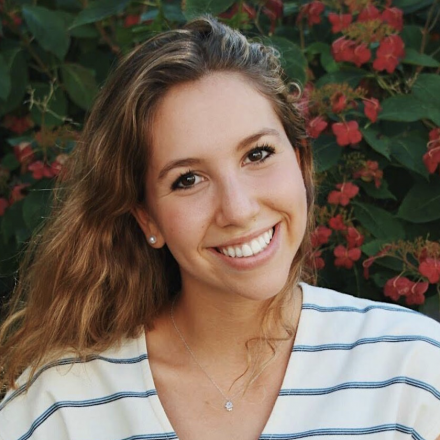 Lindsey Kapel (20C) is from Weston, Connecticut. She received a B.A. in environmental science with a concentration in sustainable management from Goizueta Business School. At Emory, Lindsey led volunteer peer mentoring organization Refugee Revive and started Emory’s coalition of Herbicide-Free Campus. She now works as a business developer for a tech start-up in New York.