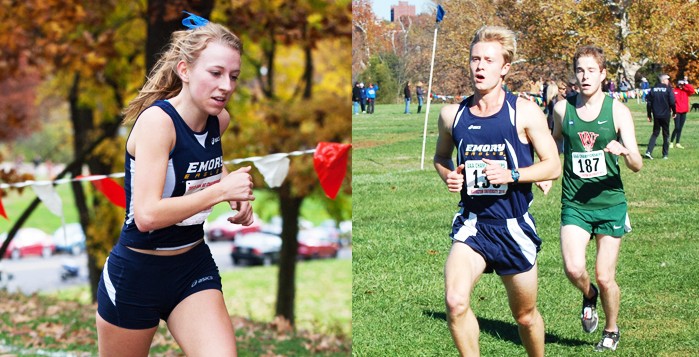 Both the men’s and women’s teams are now heading to the NCAA Finals next Saturday, Nov. 22. Courtesy of Emory Athletics.

The Emory men’s and women’s cross country teams left the NCAA Division III South/Southeast Regional Championships happy on Saturday, picking up a pair of wins and automatic bids to the National Tournament next Saturday. The meet was hosted by Berry College in Rome, Ga., which is only about 75 miles away from Emory’s campus. The proximity of the event was a huge advantage for the Eagles, according to Head Coach Jon Curtin.

“It was almost like a home meet for us,” he said. “The fact that it was at Berry College in Rome; it wasn’t that far away, and we had close to 200 alumni, friends, family and fans out there to support us.”

The Eagles had experience on the course – some having run it twice already this year.

“[The Eagles had] knowledge of the course,” Curtin said. “The familiarity helped.”

The men’s team came into the meet ranked first in the region and seeking their first regional championship since 2009.

The team was able to edge out a win by three points against Bridgewater College (Va.), finishing on top of the 28-team field with 62 points. Sophomore Grant Murphy was the fastest on the day, finishing the 8k course at 25:41, the sixth fastest overall time. Murphy was shortly joined by teammates junior Lukas Mees, seniors Alex Fleischhacker and Tyler Cooke and freshman Jordan Flowers, with times of 25:48, 25:50, 25:52 and 26:24 respectively. All five of the team’s top scores earned all-South/Southwest honors, as did sophomore Austin Hunt, who ran a 26:31.

The proximity of these times displayed the Eagles’ running unity.

“They are a very tight team,” Curtin said. “They are all very comparable in abilities, and they run together as a group, push each other as a group. It really paid off for us Saturday.”

The Eagles’ similar talent levels allow for them to pick up the slack when their teammates struggle.

“Grant Murphy was a big surprise,” Curtin said. “He is the fourth different guy who’s been our top runner this year. With this team, there’s always another guy who can step up.”

Another huge performance came from Flowers. His fifth place finish came after dealing with a case of the norovirus that has been present on Emory’s campus recently.

His effort impressed both his coach and teammate Lukas Mees.

“[He] still managed to hold it together and garner some all-region honors, not to mention make up the valuable points that helped us to the three point victory over Bridgewater on Saturday,” Mees said.

“[I] give him a lot of credit,” Curtin said. “It came down to him and was a very close score. Had he not run as well as he did we may not have won.”

The women’s team won their 18th championship in the last 24 seasons in dominant fashion, finishing with 62 points, which was good enough for a 63 point margin over second place. Senior Tamara Surtees placed fourth in the field with a 6k time of 22:14.

The win was hugely gratifying for the Surtees, as the team’s last regional win came in her freshman season.

“[A Regional Championship] was a big goal going into season, and it is really nice to finally win it,” she said. “We placed second the past two years, [so to win is] definitely exciting for a lot of us.”

Like the men, the women “ran in a pack,” according to Surtees.

“Our split between our top five runners was under a minute, which is always one of our goals.” Curtin said. “We were very happy with that.”

Both teams are now eagerly looking forward to the Division III National Championships, a contest that could be the perfect ending to what has been an unforgettable season, Mees said.

“I’ve never had as much confidence in my teammates as I have right now,” he said. “I know that every guy will step up, and we’ll have an impressive finish. It’s been an absolute pleasure running with the guys this year.”

Surtees is both excited and optimistic to compete against high-level competition. According to her, the Eagles, who took last and 32nd place last year, are aiming at a top-20 finish.

“[Nationals are] definitely not like any other race we run. They have the biggest and best competition,” she said. “It’s a reasonable goal. I think we can do it.”

Both teams will conclude their seasons this upcoming Saturday, Nov. 22, at the NCAA Division III Championships in Mason, Ohio.