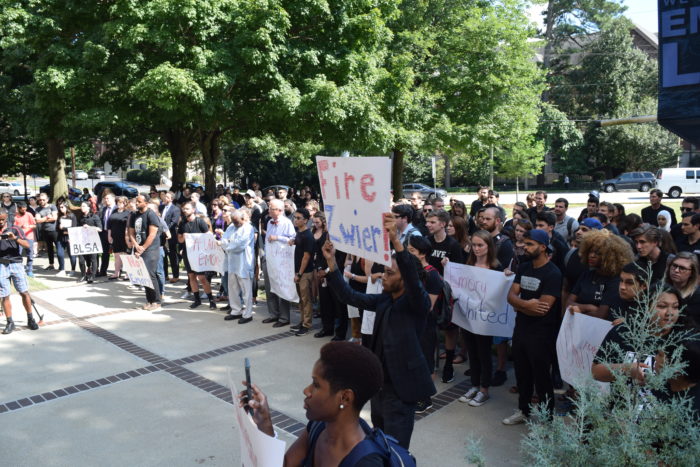 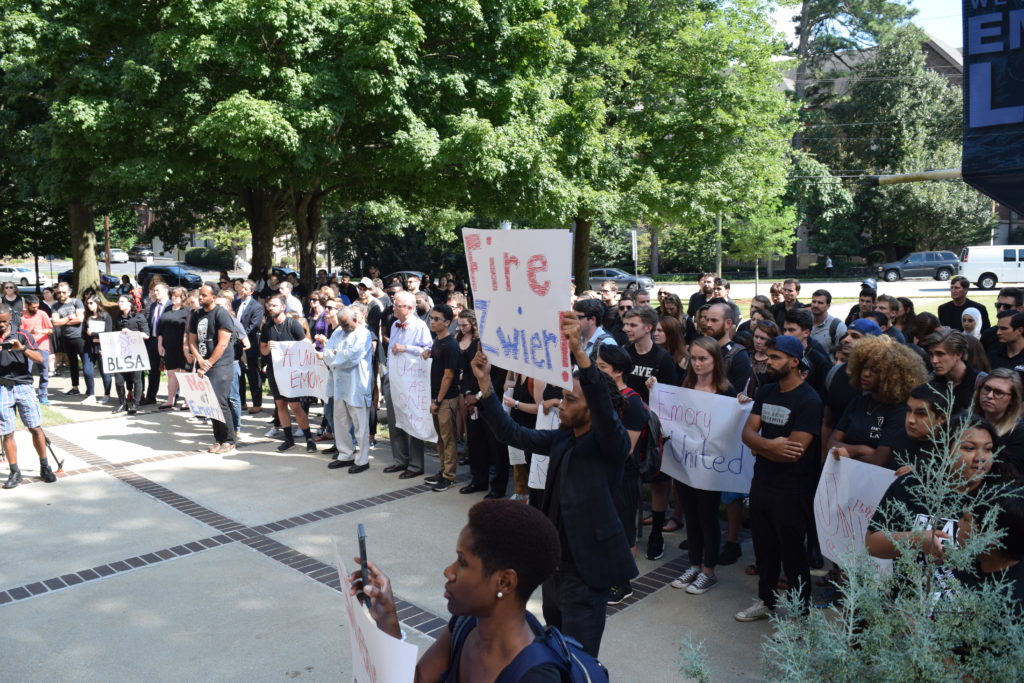 About 200 Emory community members gathered at a “unity rally” on Wednesday in response to Emory School of Law Professor Paul J. Zwier II’s use of a racial slur while lecturing in class last week.

Most attendees wore black clothing in solidarity, calling for a more respectful learning environment following Zwier’s comment last week. Among the crowd, two posters by Justin Tolston (19L) stood out, reading “I am not a n****r” and “Fire Zwier.”

After the Aug. 23 classroom incident in which Zwier said the N-word while discussing a civil court case, the professor apologized and was removed from teaching his courses while Emory investigates the incident.

Archibald said members of the Emory community “struggle with cultural competency” and that “we struggle to have difficult conversations.”

ElMurr said she hopes the Emory Law community can move forward after the incident.

Sterk supported the sentiments expressed in Archibald’s and ElMurr’s speeches, but she added that Emory also supports free speech.

“We know we all want to be a place where there is no room for hate — where there is no tolerance for disrespect,” Sterk said. “I also want to be very clear about what I’m not saying. We always will be a university and a community that will respect free speech. We also will continue to engage … in difficult conversations because that’s what we’re so good at.”

Administrators condemned Zwier’s use of the racial slur in an email last week, saying, “The term is deeply rooted in degradation, fearmongering, and the creating of a deliberate sense of ‘otherness.’”

Zwier attended the event for its entire duration, though he did not speak. He declined an interview with the Wheel, stating that the focus should be on broader racial issues.

“With everything that’s been going on, what happened in that class just sounds too trite,” Zwier said. “I think today’s a day for making statements about racism.”

“I think limiting the conversation to euphemisms and rhetoric limits … what needs to be discussed, which is intolerance,” Tolston said. “They said it’s important to understand the effects of language, but they danced around the topic. [It] is a Freudian slip out of [Zwier’s] vernacular which is much more telling of the type of person that [he] is.”

Alan Hinderleider (20L), who also attended the rally, said he thought ElMurr was “inaccurate” in describing Emory’s foundation as “shaken.”

“To say that our foundation has been shaken means that we are worse off than we were before,” Hinderleider said. “I think that events like this do not divide us, but as long as we come together afterwards, [it] will only serve to make us stronger as a community.”