The Eagles moved to 14-5 on the season with a 6-3 mark in conference play.

It was a strange scheduling scenario for the Eagles, who hosted both the Judges and Violets a weekend earlier and came out with two victories to pull themselves to second place in the UAA standings. The team had the week off before they took to the road Friday for a rematch with Brandeis.

The Eagles got off to a quick start with four points apiece from junior guard McPherson Moore and senior forward Michael Friedberg, opening an 8-2 lead less than four minutes into the game. The Judges took their first lead of the game, 11-10, on a layup at the 13:35 mark.

The teams traded leads until late in the first half, when Brandeis responded to a three-pointer from senior guard Alex Greven with a 6-0 run to end the half with a slim 29-26 edge.

Two free throws from Moore early in the second half helped the Eagles to a two-point edge, but the Judges answered once again, claiming a 43-37 lead – their largest of the game – on a three-pointer with 13 minutes remaining.

The back-and-forth affair continued when Greven sank a layup at the 9:49 mark, finishing off a 6-0 Eagles run and giving them a one-point lead.

It was the last time they were ahead in the game. The Judges responded with a 7-0 run of their own en route to holding to an imposing 70-63 advantage with just a minute to go.

The Eagles weren’t finished. Layups by Moore and junior forward Jake Davis cut the deficit to three, but Brandeis iced the game with a pair of free throws in the closing seconds to create the final five-point margin of victory.

The loss snapped Emory’s five-game winning streak. The Judges both outshot (48 percent to 39 percent) and outrebounded (39 to 30) the Eagles and gained sole control of second place in the UAA.

Moore led the Eagles with 19 points. Davis, Greven and Friedberg all scored in double digits as well, with 15, 11 and 10 points, respectively. Moore also posted team highs in rebounds and assists.

The Eagles had another close game on their hands on Sunday at NYU, trailing the Violets 16-12 before a Greven three-pointer cut into the deficit.

The Violets reclaimed a one-point advantage with two minutes left in the half before two three-pointers from sophomore forward Alex Foster made the halftime margin 31-26 in the Eagles’ favor.

Davis led the first-half charge with 12 points and an impressive trio of three-pointers. He scored 10 of the Eagles’ first 12 points.

Although the Eagles missed their first nine shots of the game, they closed the half shooting a hot 12 for 19.

Another back-and-forth contest ensued. A free throw from Friedberg with just over 10 minutes left in the second half extended Emory’s lead to six points. NYU cut the deficit to one point with five minutes to go, but a layup from Davis and a Greven three gave the Eagles a cushion that they would not surrender.

Greven and Davis led the scoring effort for the Eagles with 24 and 22 points, respectively. Foster rounded out the double-digit scorers with 10 points.

It was a legendary night from beyond the arc for the Eagles, who hit 15 of 29 three-pointers for a 51.7 percentage, good for the third-best in school history. The Violets dominated the glass, out-rebounding Emory 41-27, but they couldn’t keep up with the Eagles’ heat from deep. Six different Eagles finished with at least one made three-pointer.

With the win, Emory is now locked in a three-way tie for second place in the UAA with Brandeis and Washington University.

The Eagles will try to take sole possession of second place in the conference when they visit Washington University in St. Louis on Friday, Feb. 8 at 9 p.m.

BOO-YOW: A Tribute to Stuart Scott 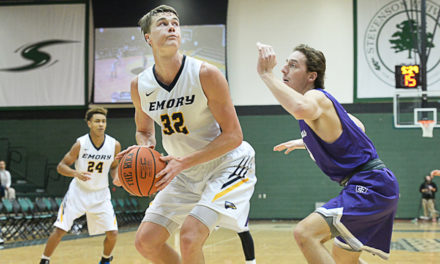 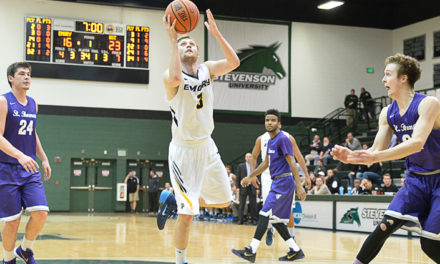 Attention to Detail the Difference in Weekend Invitational