The first line of Emory’s alma mater used to sing “in the heart of dear old Dixie,” a reference to the Confederacy. It was changed to “in the heart of dear old Emory” around 1995, but remnants of Emory’s Southern antebellum roots still endure within the pages of its yearbooks. The Wheel reviewed Emory’s yearbooks from the 1900s and found images depicting open displays of racism — even after the University desegregated in 1963. The photos portray mock lynchings, Greek members dressed in Confederate uniforms and carrying Confederate flags, and students wearing Ku Klux Klan hoods. Other offensive imagery included a photo of a Greek event from the 1967 yearbook depicting a tank with a swastika painted on its side. In the same yearbook, another photo shows an unidentifiable fraternity brother dressed as Adolf Hitler performing the “Sieg Heil” salute next to a Nazi banner. 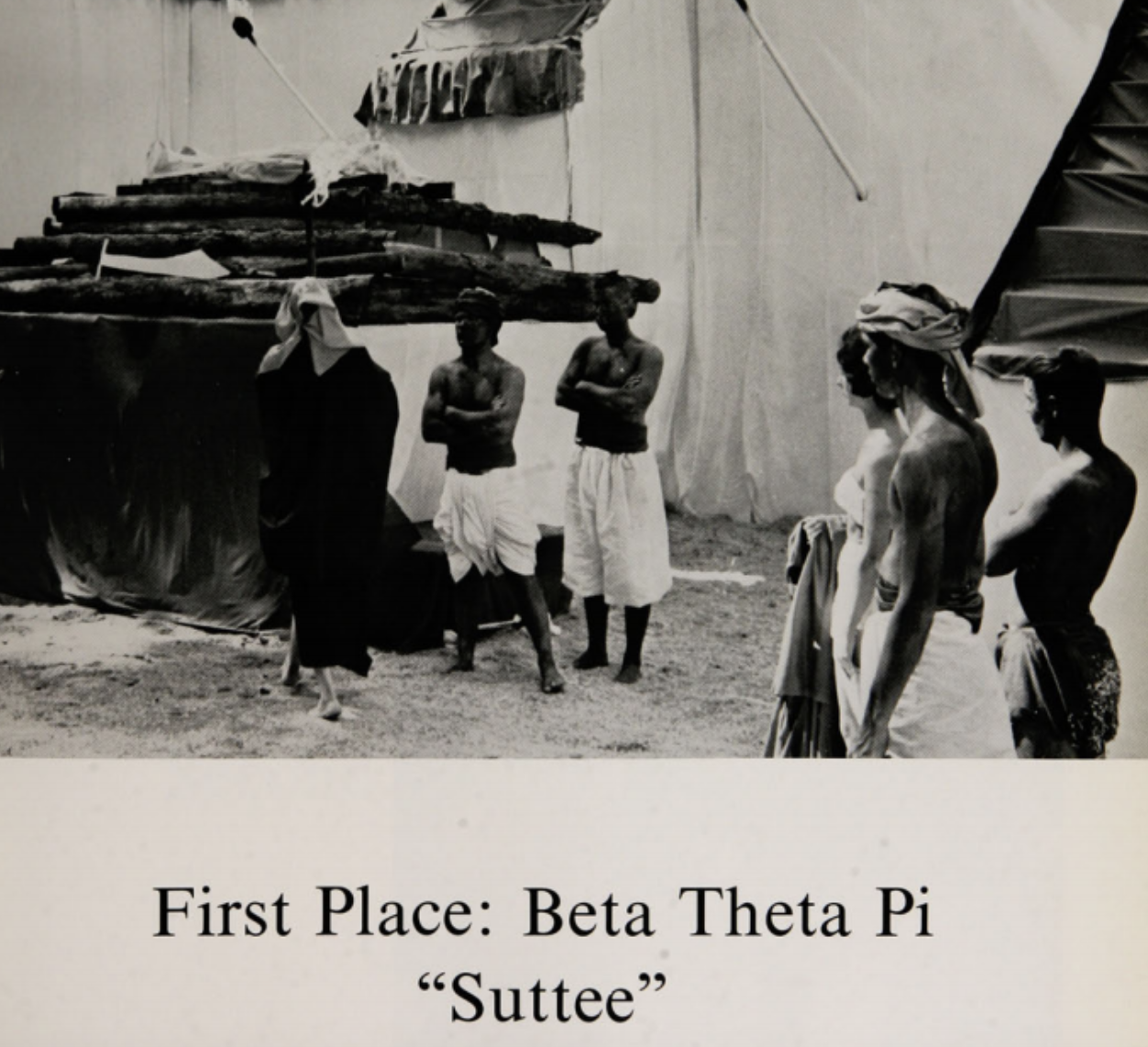 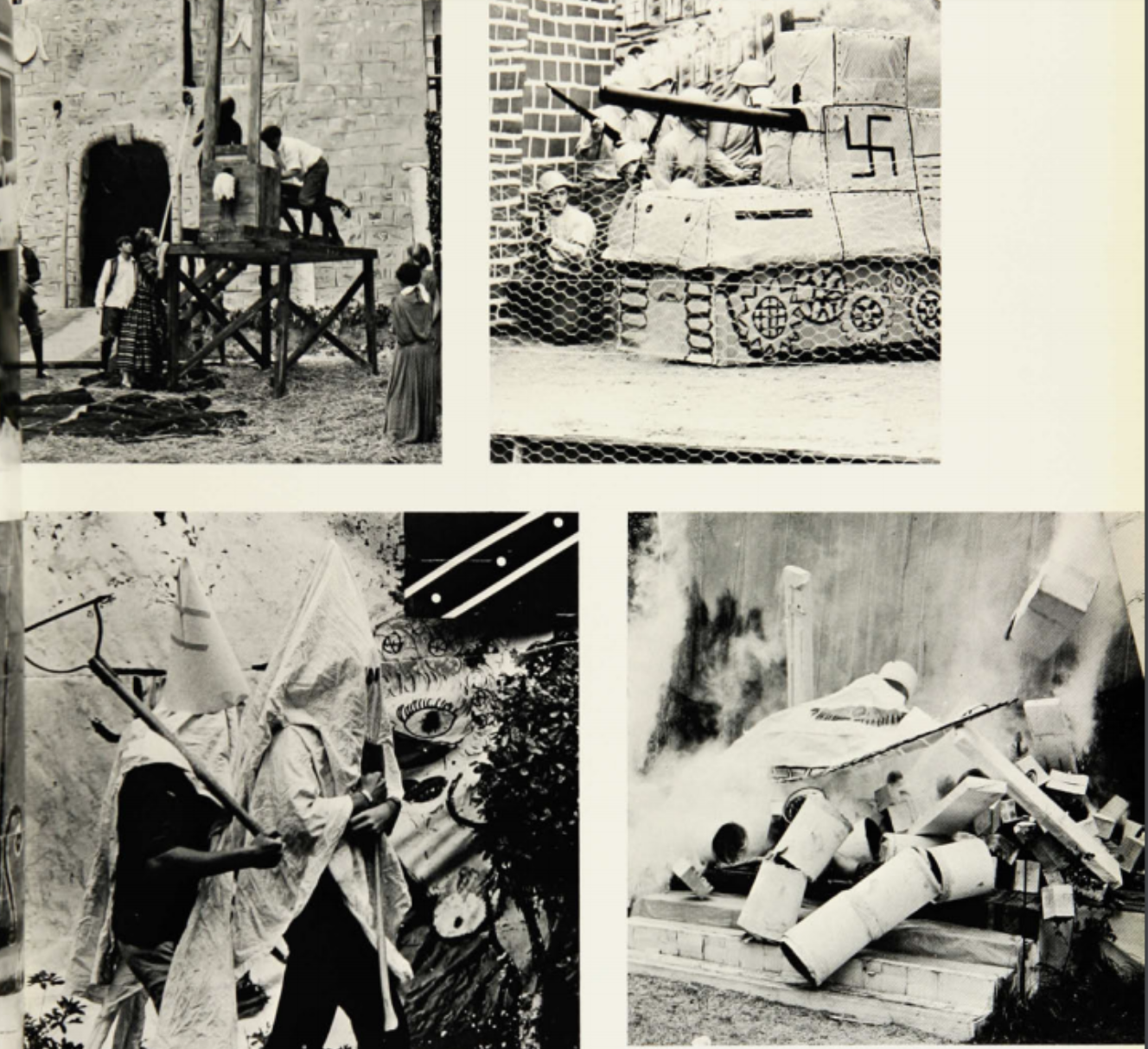 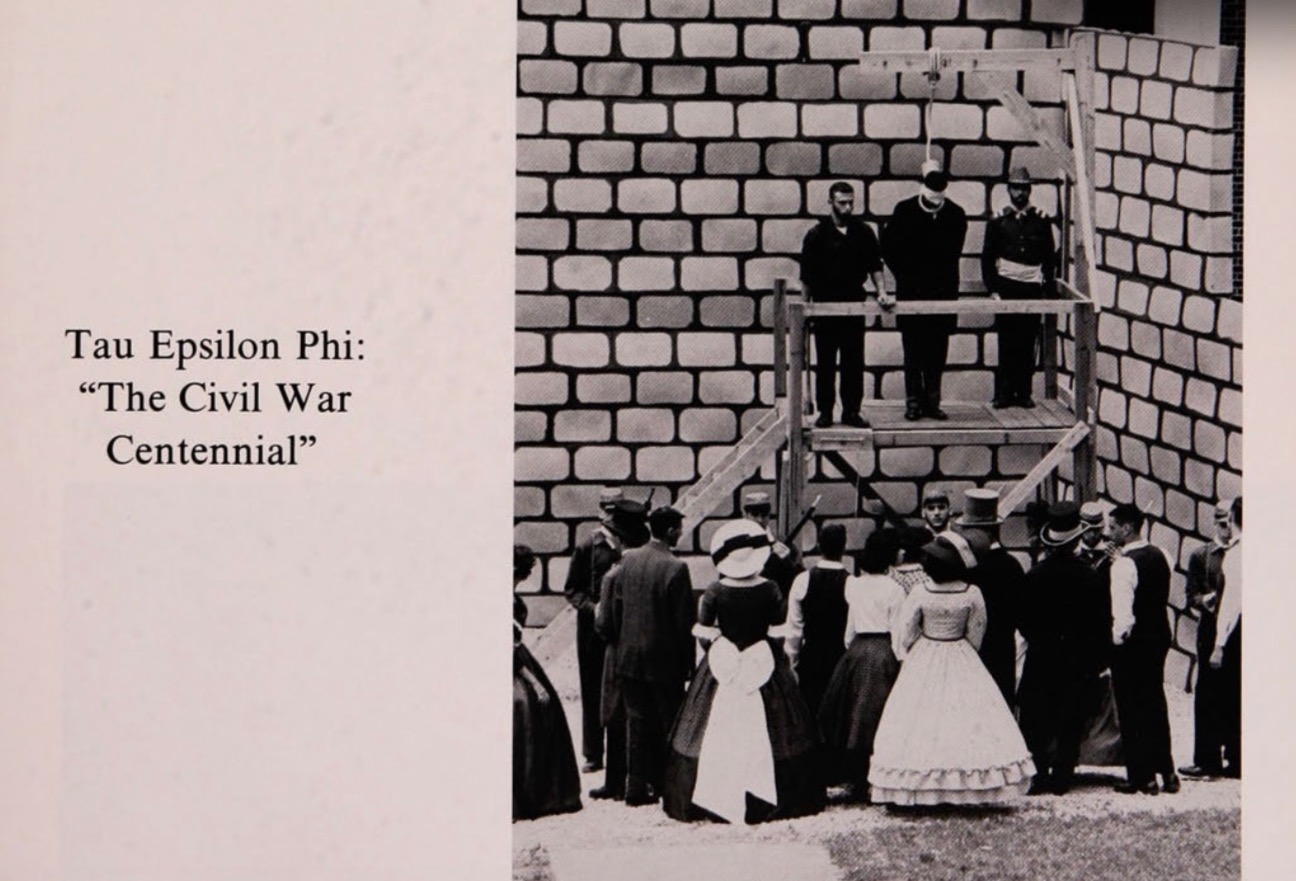 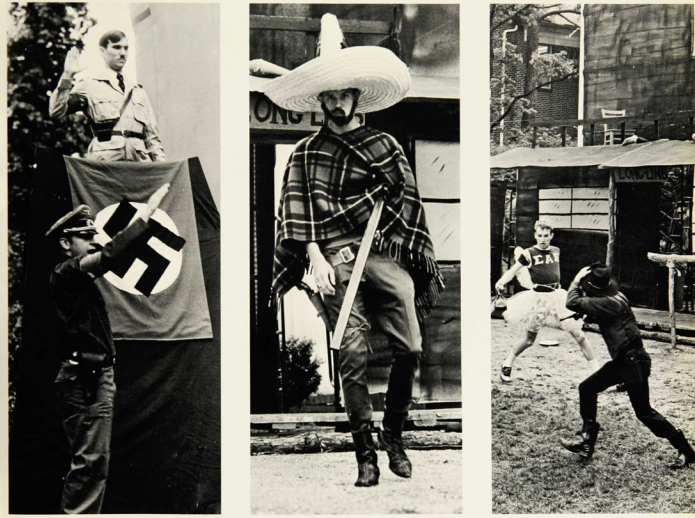 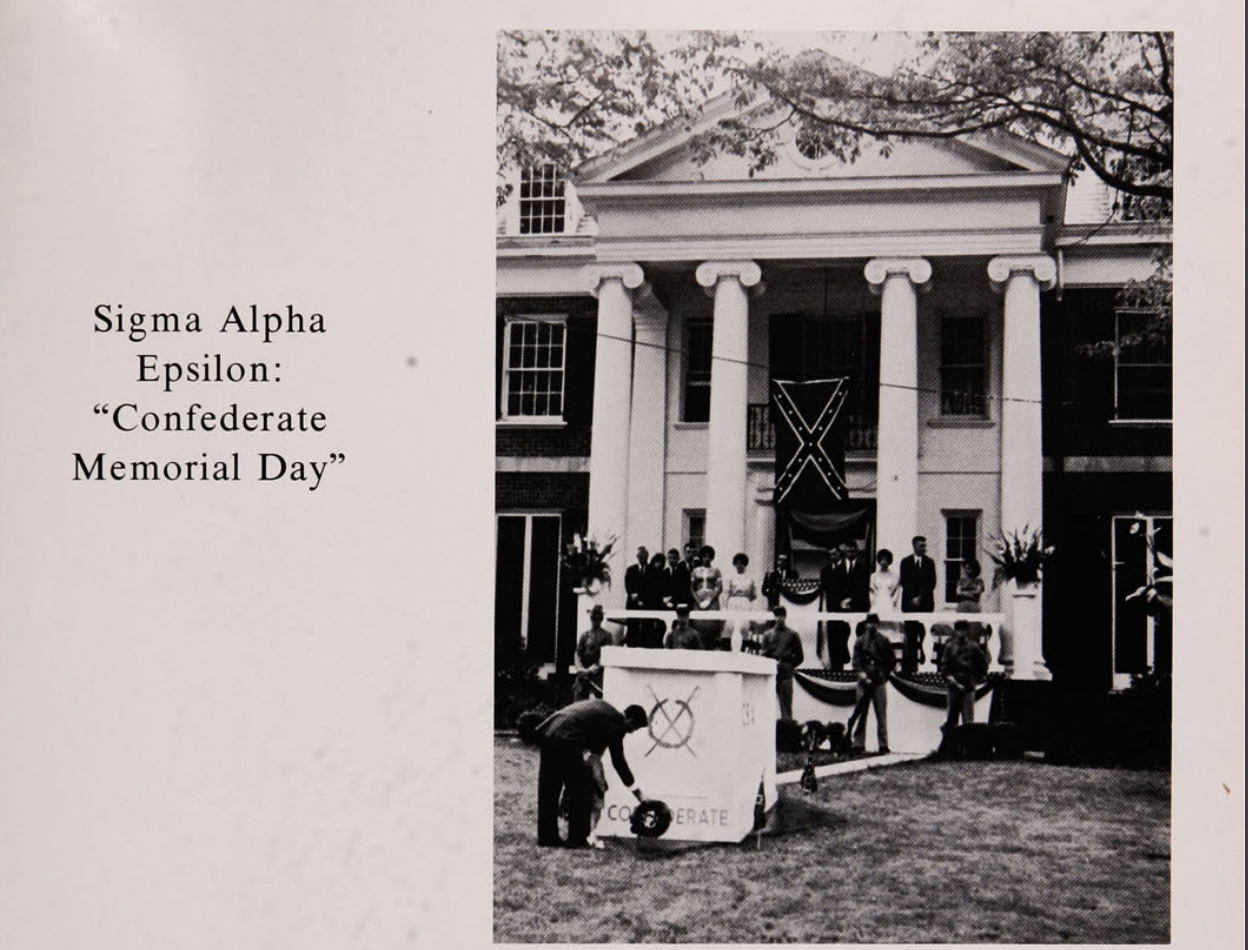 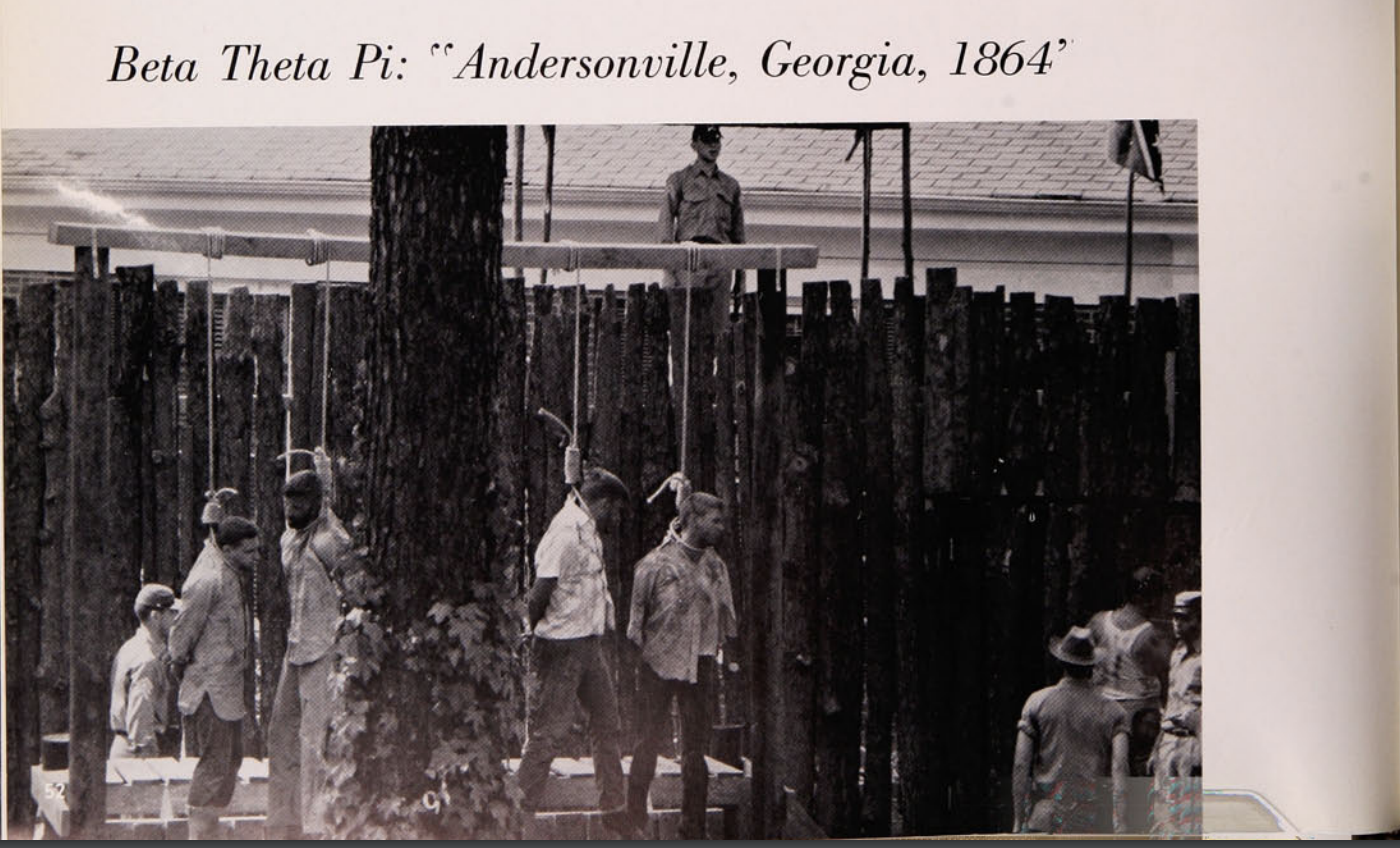 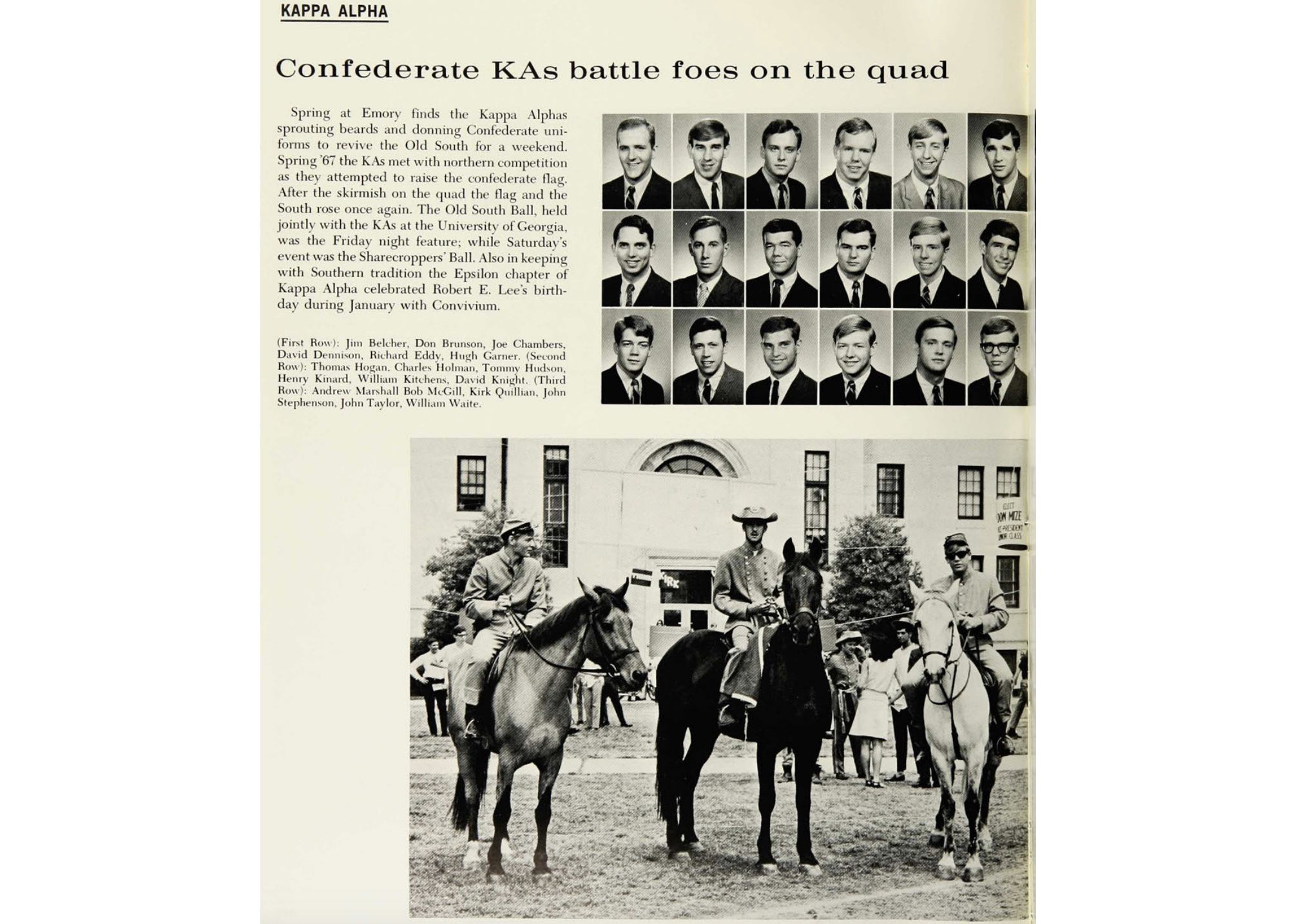 The 1966 yearbook contains a photo of Pi Kappa Alpha (Pike) depicting the Jewish genocide by the Nazis titled, “Discovery of the Final Solution.”

Most of the photos the Wheel identified were part of Greek life events. Greek life often re-enacted historical events, dressing up as people from Native American, Asian and Pacific Islander cultures. In the 1955 yearbook, Beta Theta Pi (Beta) dressed in traditional Chinese dress with straw hats and slanted eye paint in a photo titled “Chinatown New Year’s.” In 1959, Beta depicted a Confederate prisoner-of-war camp, Andersonville, with some brothers pretending to be Union soldiers with nooses around their necks.

Yearbooks from 1911 to 1999 have been available to the public on Emory’s website since 2011, according to University Archivist John Bence. Yearbooks are no longer made every year due to insufficient student interest and staffing, Director of Media Relations Elaine Justice said.

KA’s headquarters said in a Feb. 25 statement to the Wheel that the old yearbook photos do not reflect their values today.

“The brothers of Kappa Alpha at Emory are dedicated to cultivating an environment of acceptance and diversity within our chapter and the Greek community. The images are inappropriate and wholly against our values,” Assistant Executive Director for Advancement Jesse Lyons said.

Emory’s Beta Theta Pi President Jackson Hill (20B) wrote in a Feb. 25 statement to the Wheel that Beta is committed to maintaining diversity in Greek life.

“Beta Theta Pi’s history of initiating the first African American member of all 66 NIC fraternities in 1954 is but one example of its long-held position on racial equality and inclusion,” Jackson wrote. “We cannot presume to know the rationale for what was done 60 years ago. Today’s Beta chapter, however, remains unequivocal in its support for a Greek community that is diverse in its thought and membership, and is a welcoming and safe environment for all Emory students.”

University President Claire E. Sterk acknowledged the “offensive and racist” photos in a Feb. 20 University-wide email and called for the formation of a commission to evaluate Emory’s legacy. More information on the commission will be provided by the end of the semester.

“The offensive and racist images in our yearbooks cannot be erased any more than they can be forgotten,” Sterk wrote. “It is my fervent hope that they will serve as an indelible reminder to all current and future Emory students, faculty, and staff of the type of ignorance and hate we must passionately oppose.”

Alumnus Natalie Gullatt (11C), who is a member of Caucus of Emory Black Alumni, also agreed with Sterk’s comments, stating the yearbooks are a part of Emory’s history and are important to recognize, and that the University should consider “redacting the photos online, putting a statement over each photo with the text, ‘we redacted this photo because it doesn’t represent Emory values.’”

Gullatt said the photos may be available to be reviewed in Emory’s library.

“Overall, Emory has done a really good job and better than some other schools of making sure that you know that diversity is very important and they respect it,” Gullatt said. “Is Emory perfect? No. But do I think Emory is doing a good job working toward it and I’m happy to help continue to make Emory a more inclusive university.”

Alumnus Barry Koplen (67C), who was a brother of Jewish fraternity Tau Epsilon Pi (TEP), said the University administration was lax about discrimination on campus while he was a student.

“It was almost as if the administration was completely unaware of the discrimination and the harm that it caused and what it was doing to everybody,” Koplen said.

During the late 1960s, black students on campus held several protests regarding racial discrimination toward students and food workers in Cox Hall.

“Part of the problem of the lingering effect of discrimination and prejudice is that some people don’t want to forget and don’t want to accept that institutions change, and Emory today is nothing like the Emory it was then,” Koplen said.

In Fall 2015, an organization called Black Students at Emory presented administrators with a list of 13 demands regarding racial injustice at Emory.

Alumnus Donald Hart (67C), who was a brother of the Sigma Chi (Sig Chi) fraternity, said his fraternity did not view any of their actions as being racist at the time.

“No [we didn’t see it as being racist] … this was the era of John Wayne movies and ‘Bonanza’ on TV,” Hart said.

Hart added that he believes fraternities would not engage in openly racist ways today.

“We probably would not do some of those skits because we have learned a different perspective on those issues, but at the time we weren’t doing anything that we thought was completely, intentionally offensive to anybody,” Hart said.