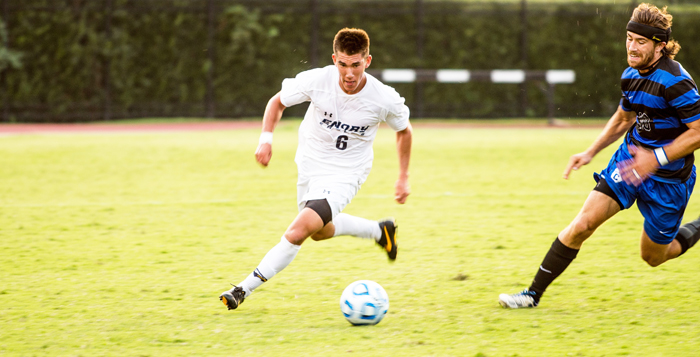 Junior midfielder Nick Schook runs the ball around a defender. Schook and the Eagles will take on the Panthers at Birmingham-Southern College (Ala.) Wednesday and try to extend their win-streak to eight
games. Their record on the season is 7-0-1. | Courtesy of Emory Athletics

Last Saturday, the Eagles shut out Berry College (Ga.) to extend their win-streak to seven games. An early goal in the 12th minute from sophomore forward Jason Andrejchak put the Eagles in a strong position from the start of the game.

Impressively, the Eagles have allowed only two goals in the past six games. Junior goalkeeper Abe Hannigan, who played the entire 90-minute duration of the Berry game, blocked 4 on-target shots from the Vikings. The Berry strikers were prone to off-target attempts due to the pressure put on them by the Eagles’ defense.

The squad’s discipline shone throughout the game, as not a single Eagle picked up a yellow or red card during the match. Berry, on the other hand, received three in the last 15 minutes of play.

That factor allowed the Eagles, who were focused and tough in their corner, room on the opposing side of the pitch. Senior Dylan Price assisted Andrejchak’s early goal, securing his fourth of the season thus far.

Price has made 11 assists and 28 goals since his first cap for the team during the 2011-12 season. His contributions this season have landed him eight points, placing him second in points among Eagles.

Andrejchak’s goal places him with 13 points, cementing his place as this season’s current point-leader.

Andrejchak has scored nine goals since his first cap during the 2013-14 season. With excellent contributions in the offense from Andrejchak and Price, Travis explained that the team is looking to improve on their goal scoring capabilities in “the final third of the game.” Travis also pointed out that the Eagles’ defense was extremely instrumental in protecting the win.

The Eagles look to continue their win-streak on Sept. 24 when they face Birmingham-Southern College (Ala.) for an away match.