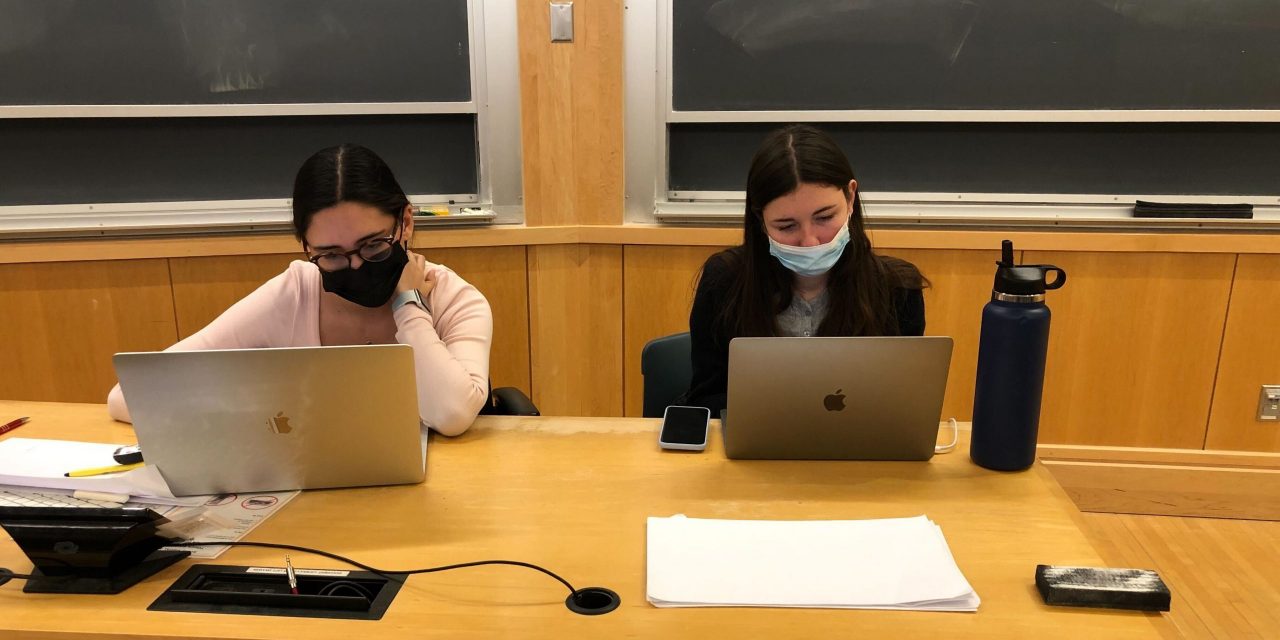 Eu Giampetruzzi (23C) and Grace Kessler (24C), competitive debate partners in Emory University’s Barkley Forum for Debate, Deliberation, and Dialogue, are now unofficially the third-ranked collegiate policy debate team in the nation, an achievement following years of practice debates, research and commitment. The ranking will be made official in March.

The duo won first place in the Herbert L James Debates, known as the Dartmouth Round Robin, last December held at the New Hampshire college. The pair went undefeated at the prestigious debate competition between seven of the top teams in the country, which are chosen by invitation, Giampetruzzi said. 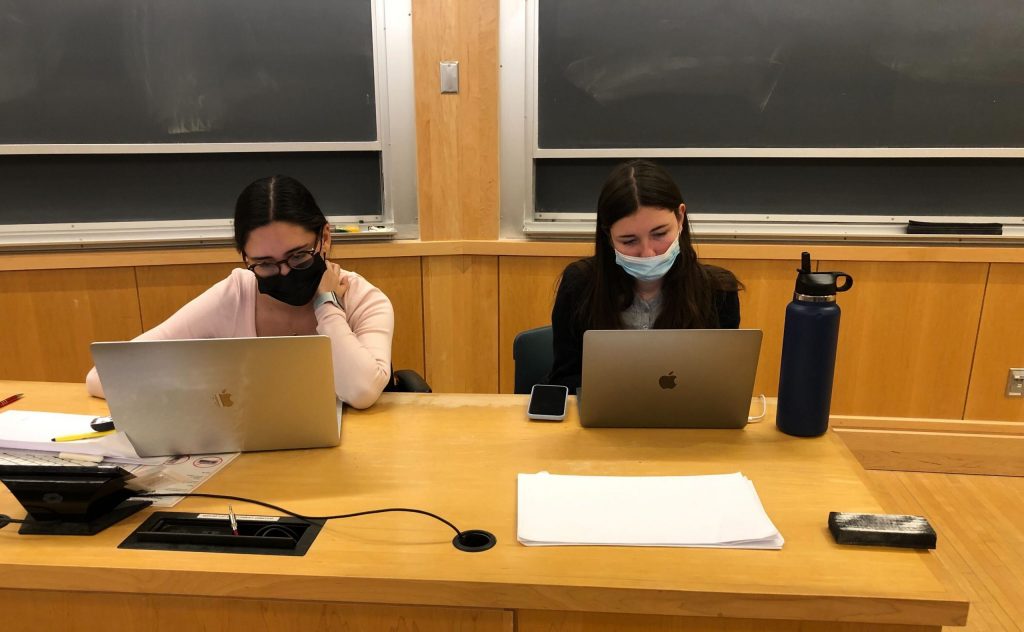 Eu Giampetruzzi (23C) and Grace Kessler (24C) research antitrust laws to prepare for a debate round at the Dartmouth Round Robin tournament in December. (Photo Courtesy of Grace Kessler.)

Their victory came after winning second place at the same tournament last year. Giampetruzzi also won the tournament as a freshman with a different partner.

The team specializes in policy debate, in which debaters work as a pair to affirm or negate a policy resolution against teams from other schools across the country. One of the winning strategies of policy debate is to make the maximum arguments possible in the limited amount of time each team has to speak.

“At its highest level, everyone talks as fast as they can,” she said. “You sound kind of like an auctioneer, and … you get a lot better at processing arguments very quickly.”

This year’s topic is on antitrust policy, and the team will have more specific debates related to the topic throughout the season at tournaments, Kessler said. Preparation for high-level debate, though, entails day-to-day research and gathering evidence.

“We cut something called cards,” Giampetruzzi said. “We take pieces of articles and make it evidence, and we’ll do a substantial amount of that per day, like multiple hours, especially in the lead up to big tournaments like the Dartmouth Round Robin.”

Though they have only been partners for less than two years, Giampetruzzi and Kessler are two of the most talented debaters Mikaela Malsin, the director of competitive debate in the Barkley Forum, has ever worked with. But their success is also fueled by the rest of the debate team, who contributes to research efforts to support Giampetruzzi and Kessler, Malsin said.

“We have one of the best set of coaches in the country, and we also have a larger team that contributes to their efforts, you know, kind of putting in research and supporting them in any way that they can,” Malsin said.

However, debating at a high level while maintaining their studies as full-time students in the college has been something that both debaters have had to learn to manage.

“Debate itself definitely can be all-consuming and anxiety-provoking, but I think that I’ve found a much more healthy relationship with the activity where it’s not my entire life,” Kessler said. “If you can find other intrinsic benefits in the activity like the community and the coaches and your partner, then it’s a lot more fulfilling.”

For Giampetruzzi, one of her biggest challenges  is staying motivated.

“I think it’s like anybody who’s in a professional sport,” she said. “It’s hard after a while to not get distracted by everything else that there is in the world that you could join and be a part of.”

Both debaters came from small schools. Kessler grew up in Kansas, where her school had few resources for debate. Giampetruzzi is from Venezuela but first started debating as a high school freshman at a small school in Miami, where she learned to debate with female partners.

As an all-female team, Giampetruzzi and Kessler often face sexist remarks aimed to diminish their success.

“Debate itself is a very male-dominated activity, there’s a lot of times where people will talk down on you,” Kessler said. “Debate itself can kind of create a forum where people will be condescending towards you or kind of belittle you, and there have been times when people have said things to us that we just know they wouldn’t have said or been as rude as they were if we were not women.”

While debating at other schools, the pair has faced disrespect from all-male teams, including remarks such as they are a good women’s team, but not a good team in general, Giampetruzzi said.

At Emory, though, the culture contrasts the typical male-dominance in the activity. Emory’s debate coaching staff is composed of three women and one man.

“I genuinely believe that Emory is the best place to be if you want to be a debater and a woman in college,” Kessler said. “The team just has such a culture of respect.”

Despite challenges with sexism, Giampetruzzi recognizes the team’s racial and financial privilege.

“We’re protected from a lot because we are white but definitely have faced a lot of sexism in debate,” she said.

Emory funds the Barkley Forum’s travel expenses, but growing up, debate was a “huge financial commitment for families” of students who wanted to participate, Giampetruzzi said. To give back to the debate community, the Barkley Forum works closely with the Atlanta Urban Debate League to help young debaters who do not have the same opportunities to debate, Giampetruzzi said.

“It’s a huge part of our commitment,” she said. “I think that’s been a super cool part of my Emory experience.”

“When I was younger, I would always look up to the women who were doing really well in college policy debate, but there weren’t a lot of teams of two women.” she said. “I think it’s really special that Eu and I can take on that role and hope to be role models for other young girls in the activity.”