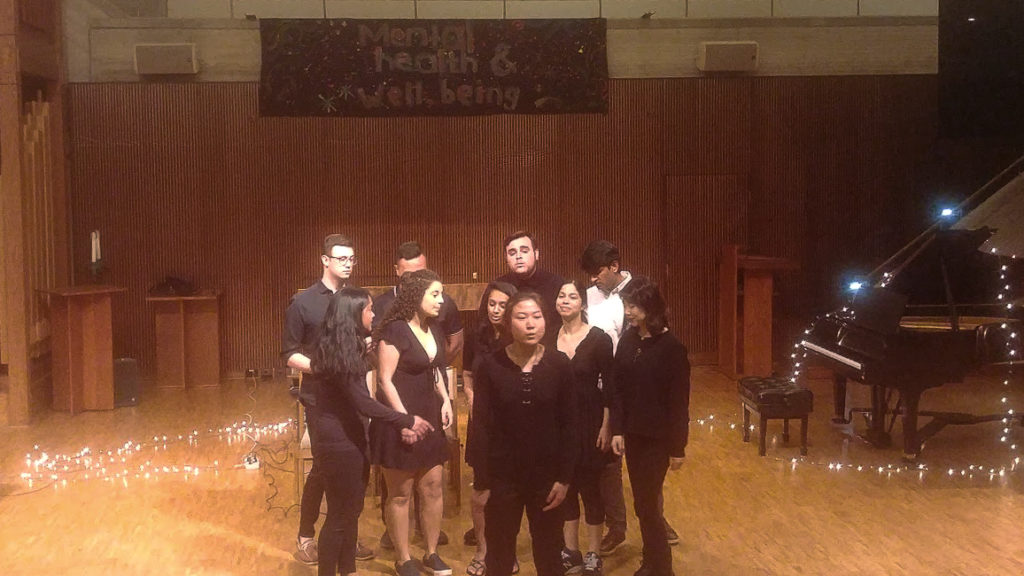 ChaiTunes performs in Cannon Chapel at the ‘Mental Health and Well, Being Showcase’ hosted by Dark Arts./Aidan Vick/ Staff Writer

If you ask Emory Dark Arts member Ramona Li (20B), we have sanitized mental health stories for far too long.

Li, who delivered the opening remarks for Emory Dark Arts’ biannual mental health showcase, discussed the importance of creating spaces for people to share their stories without judgment or stigma. The “Mental Health and Well, Being Showcase” was one of those places.

The event took place at the Cannon Chapel on March 23 and was one of the most well-attended Dark Arts showcases in recent years, according to Li.

According to the group’s Facebook event, the showcase aimed to provide students a space to share their experiences with and speak freely about mental illness to destigmatize the topic on campus. Each of the night’s performances explored an aspect of living with psychological disorders, including others’ responses and the experience of seeking counseling. The types of mental illnesses represented included depression, anxiety, eating disorders, addiction and obsessive-compulsive disorder.

The show itself consisted of a set of 16 performances, bookended by opening and concluding remarks, and an optional post-show discussion to give audience members a chance to join the conversation. Most of the night’s performances were based in music or poetry, but the showcase also included a comedy skit and a short film.

For the opening act, Emory’s Jewish a cappella group ChaiTunes performed a medley that included melodic renditions of the Beatles’ “I Want To Hold Your Hand” and Linkin Park’s “One More Light.” Their version of “I Want To Hold Your Hand” was noticeably slower in tempo than the original, and their lofty vocal harmonies lent the tune a sense of sobering melancholy absent in the classic version.

Following ChaiTunes’ medley, Carlos Aparicio (22C) performed “F. Lonely,” an original rap about depression and addiction. During the performance, Aparicio engaged the audience by waving his phone flashlight back and forth, inspiring them to do the same.

Later, Rhiannon Davis (22C) presented two found poems, a form of poetry that combines and reframes words, phrases and passages from other sources. The first was called “As It Is,” and the second, titled “Dearest,” synthesized letters that Virginia Woolf, Sylvia Plath and Vincent van Gogh wrote shortly before their respective deaths.

At intermission, attendees were encouraged to view the visual arts display, which included several original pieces and a collection of photos taken of students around campus who had written messages about mental health on blackboards.

Dark Arts kicked off the second half of the showcase with the short film “Therapist Speed Dating,” which recently won the Emory 2019 Campus MovieFest Silver Tripod Award for Best Story and Jury Award, which is awarded to each participating school’s four best films. Directed by Samah Meghjee (18Ox, 20C), the comedy follows Sara, a woman with social anxiety, who participates in a speed-dating event. There, she has 60 seconds to matchmake with counselors. Several of the therapists try to sell her Zoloft, a prescription medication used to treat several types of psychological disorders, including depression, obsessive-compulsive disorder and post-traumatic stress disorder. One therapist even inquires about her chakras and her incense preferences. Although she finally meets a therapist who works for her, she ultimately chooses to buy Zoloft rather than schedule a session when she realizes how much the sessions will cost her. “Therapist Speed Dating” effectively comments on the issues that individuals with depression face when seeking affordable treatment.

Mark McGovern (22C) and Ariel Brown (22C) took to the stage next for a comedy skit called “Mark and Ariel’s Mental Art M.A.M.A.” Though two main characters initially seek a cure for depression so that they can include it in their closing statement of a monologue, they eventually realize that there is no easy solution. The skit was a hilarious send-up of quick cures for depression, with stellar performances from both actors.

The rest of the show consisted of readings and musical performances, including a letter about body image and eating disorders written by Darby Rosenberger (21C) and a cover of All Time Low’s “Missing You” performed by Gabrielle Ruban (22C). All in all, the event succeeded in providing the open, honest dialogue on mental health that it had strived to, and the audience’s radiant positivity and acceptance were wonderful to witness.