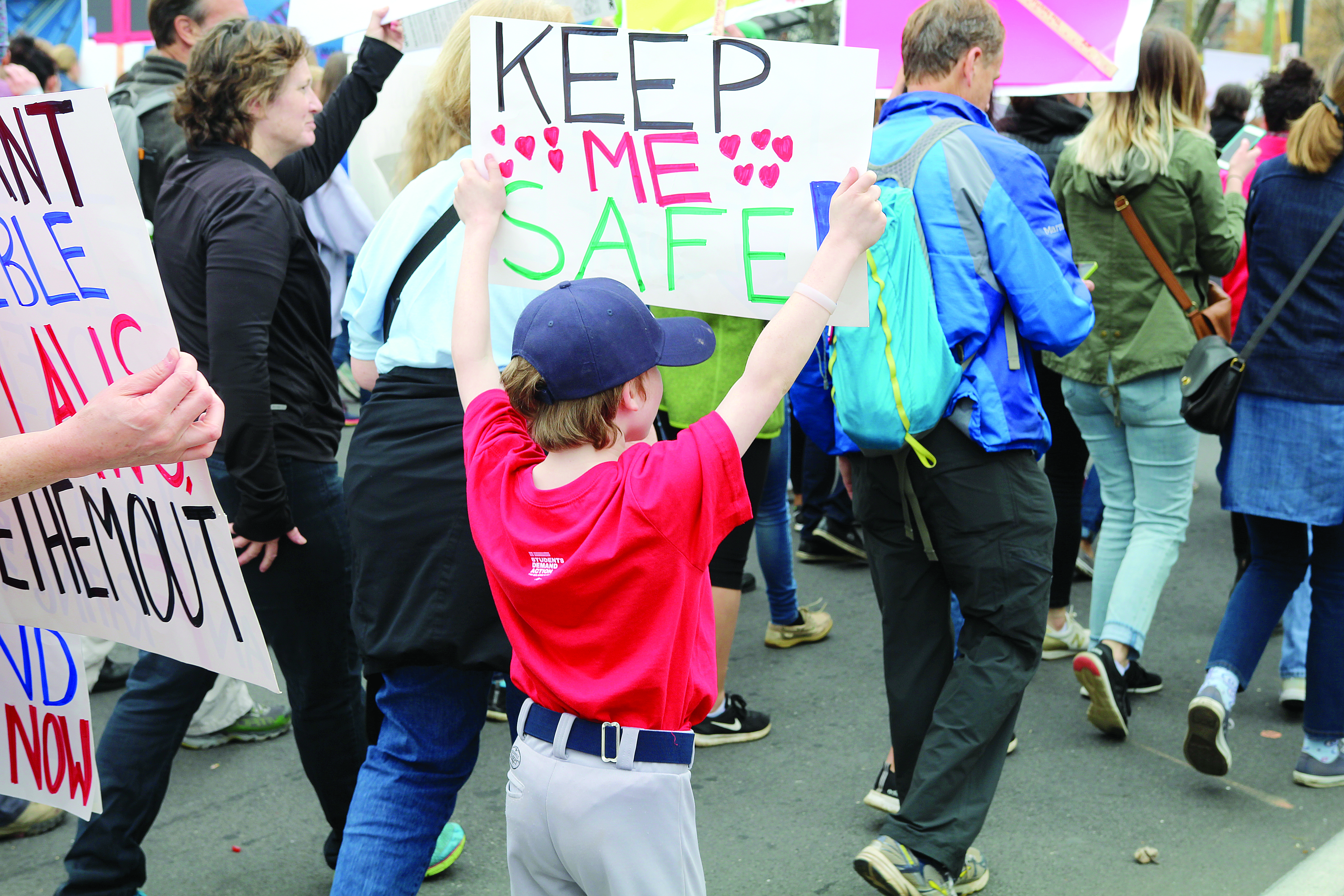 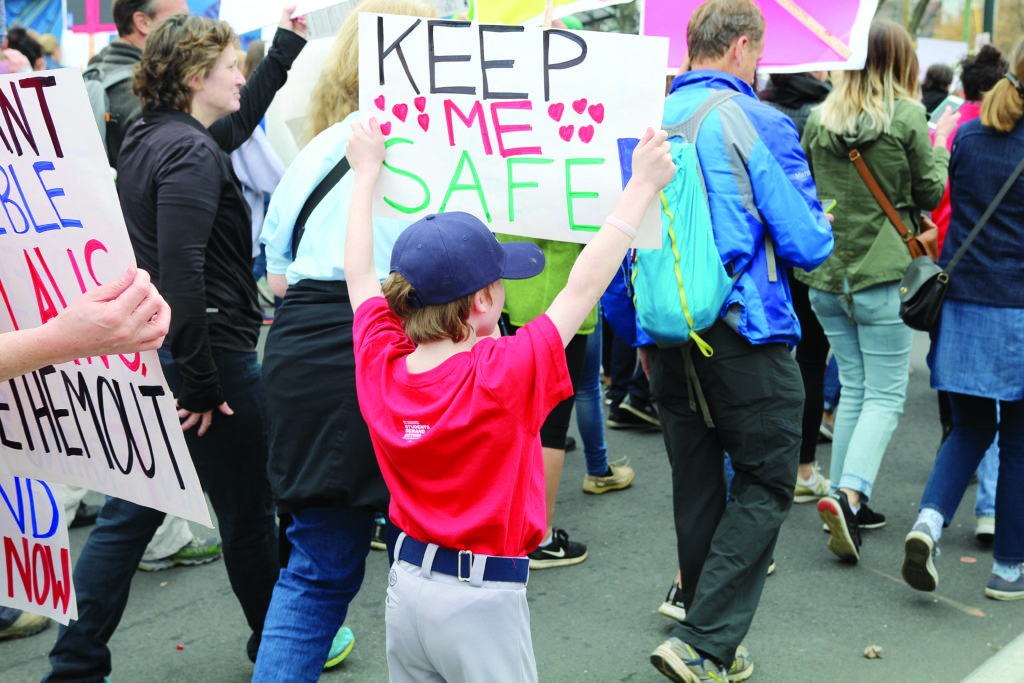 About 200 Emory community members participate in the March 24 “March for Our Lives.”/Ayushi Agarwal, Photo Editor

Shouts of “not one more” and “vote them out” filled the streets of Atlanta as protesters, including roughly 200 Emory community members, participated in the March 24 “March for our Lives” against gun violence. The Atlanta event was one of more than 800 such events worldwide calling for Gun Control reform in America. “March for Our Lives” was spurred by the Feb. 14 Parkland, Fla., mass school shooting, in which 17 people died.

More than 30,000 people in the Atlanta community marched from the Center for Civil and Human Rights to the Georgia State Capitol and heard speeches from U.S. Rep. John Lewis (D-Ga.) and three Parkland shooting victims, according to the Atlanta-Journal Constitution. The youth-led movement was led by student survivors of the shooting at Marjory Stoneman Douglas (MSD) High School.

Emory shuttles, co-funded by the Student Government Association (SGA), Residence Life and College Council (CC), departed from Woodruff Circle every half hour between 10 a.m. and 2:30 p.m. and picked up students at 3 p.m. and 4 p.m from downtown Atlanta to return to campus. Shannon Anderson (20C) organized the four Emory shuttles with the help of SGA Sophomore Representative Johnna Gadomski (20C). According to Anderson, the Emory shuttles cost $2,400: Residence Life funded $1,200, CC funded $400 and SGA funded $800.

At least 150 Emory students used the shuttles to attend the march, according to Anderson. On the Emory to March for Our Lives Facebook page, about 400 Emory students RSVP’ed to the event.

Anderson was also one of the student organizers for the Atlanta “March for Our Lives.” She led the logistics committee and was in charge of planning the route for the march, setting up bathroom locations and water stations. The committee formed one week after the Parkland shooting.

When asked about how she felt after the march, Anderson stated that the experience was surreal and that she was amazed to see the event come together. She also enjoyed seeing how involved the Emory community was in the march.

“Just knowing that the Emory community was involved as well was something I felt really humbled by,” Anderson said.

Cindy Hernandez (20C) and Becky Shepard (20C) said they attended the march to advocate for politicians in power to improve gun regulation. Shepard carried a sign during the march that read, “Actually, guns do kill.” She said she’s no longer surprised to hear when little kids die in school shootings.

Shepard said the march felt like a powerful way for an ordinary citizen to make a difference.

“I just want to, as an ordinary citizen, do what I can to spread the word even though the people in power aren’t doing anything,” Shepard said.

Hernandez said the Parkland shooting was the “final straw” and believes action needs to be taken for stricter gun control. She said she is happy to see that young people are the ones taking initiative.

Hernandez brought a poster featuring the names of dozens of school shooting victims, including those from Parkland.

Lewis observed how the country has lost key American figures, including Martin Luther King Jr. and John F. Kennedy, because of guns. He said no one is ever too young or too old to protest against gun violence.

“We can stop it,” Lewis said. “I got arrested, went to jail 40 times and since I’ve been in Congress, five more times. I’m probably going to go again trying to do something about gun violence.”

Throughout the march, protesters chanted slogans pleading for political action on gun-related issues and against the National Rifle Association (NRA) including “vote them out!” and “the NRA has got to go!” Protesters also held signs that said, “How many more?” “Enough is enough,” “School zones shouldn’t be war zones” and “Dear Congress, I’m an educator not a human shield.” One woman held a diploma case with a paper inside that read, “Bullets are not school supplies.”

Some activists were registering people to vote at booths alongside the march route.

During the afternoon program at the conclusion of the march, Historically Black Colleges and Universities (HBCU) Outreach Director and Spelman College junior Mary Pat Hector began her speech by asking the crowd to repeat chants like, “It is our duty to fight for our freedom” and “We must love each other and protect each other.”

Afterwards, she said she was “here on my brother’s 12th birthday because his life depends on this.” Hector said she was tired of “more victims than answers” and criticized President Donald J. Trump’s solution of arming teachers with guns, which would not prevent school shootings, she said.

“[We need to rid] our political system of corrupt politicians like him, [Sen.] Marco Rubio [R-Fla.], [Sen.] John McCain [R-Ariz.], and other conservatives that believe that arming our teachers is the answer to this problem,” Hector said.

Parkland student Jake Zaslav spoke about the importance of voting, noting that citizens — not politicians — control the fate of the country. In response to politicians who believe it is too late to implement a ban on guns, J. Zaslav said not taking action is worst.

“If we do not even try, then we are allowing innocent lives to be lost because we are too afraid to take a chance,” Jake Zaslav said.

Parkland student Alec Zaslav spoke about his experience during the Feb. 14 shooting and how the survivors and families of the victims “will never be the same again.” Alec Zaslav also had a message for politicians “who are still not taking us seriously” and “who think that thoughts and prayers” are enough action against gun violence.

“Your time is running out,” Zaslav said.

The crowd followed his message by chanting, “Vote them out!”

Mikko Biana (21C) told the Wheel after the march that the event exemplifies the difference being made by this generation. Biana is from Florida and lives 20 minutes away from the MSD high school. He said he visited the school over spring break and saw the 17 different memorials outside the building that commemorate the lives lost on Feb. 14.

“It was very sobering because you always think it can’t happen to you. It can’t happen to where you’re from. You should always care about gun control and gun violence even if it doesn’t happen in your community,” Biana said. “It inspired me to come out today and do something.”