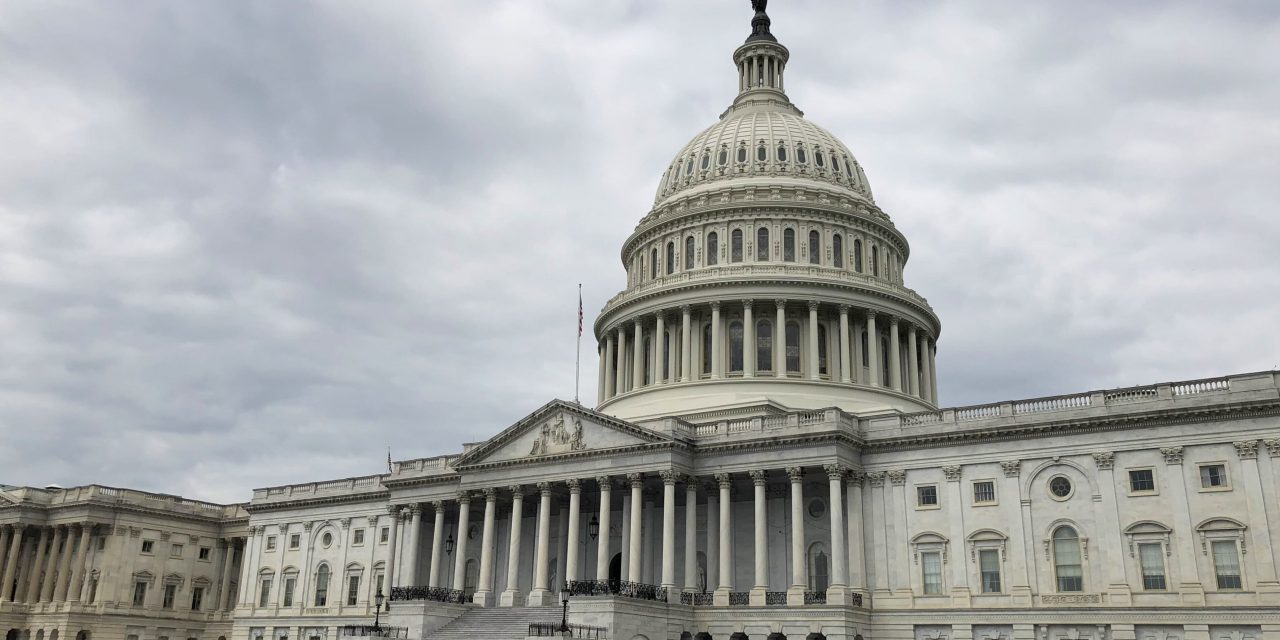 As many in the Emory community began celebrating their part in flipping control of the U.S. Senate for Democrats, insurrectionist supporters of the president broke into the U.S. Capitol building, preventing members of Congress from certifying the Electoral College vote for President-elect Joe Biden.

Some Congress members, staff and journalists evacuated and some hid for their lives in the Capitol Wednesday afternoon, causing Washington D.C. Mayor Muriel Bowser to issue a city-wide curfew beginning at 6 p.m. Congress reconvened after the buildings were cleared later that evening to continue counting the Electoral College votes, certifying Biden’s victory early Thursday morning.

Virginia Brown (23C) was on the floor of the Senate as part of her internship as a chamber assistant when she heard rioters break down the barriers outside the Capitol.

Brown carried the Electoral College ballots in a widely circulated photograph on Twitter with a caption stating that she had secured the ballots from rioters.

However, Brown said the image was taken earlier in the day when she was transferring ballots to the House chamber, and she was not the staffer responsible for securing them during the evacuation.

“It was actually a woman Senate aide who secured the electoral votes. Of course it was.” pic.twitter.com/3HYfVLGWW4

Brown said senators, who were in the middle of objections to the Arizona vote count, stopped speaking and were locked into the chamber. Once rioters broke into the nearby lobby, Brown was evacuated to a nearby office building with senators like Majority Leader Mitch McConnell (R-Ky.) and other staffers for the next several hours.

“It was complete chaos and you could hear them coming and running around the halls and just being rushed into the basement, like senators were running through the underground tunnels,” Brown. “It was kind of that moment — everyone was the same. And I think that was a bit humbling, because we were all going through this incredibly terrifying experience.”

Once the Capitol was secure, Congress returned to the building to certify the vote count, which Brown said was littered with broken windows and debris. Brown said she was choking on tear gas that remained in the rotunda air.

A D.C. native, Brown also noted stark differences between law enforcement’s response to Black Lives Matter protesters in the city over the summer and the lack of force against the rioters. 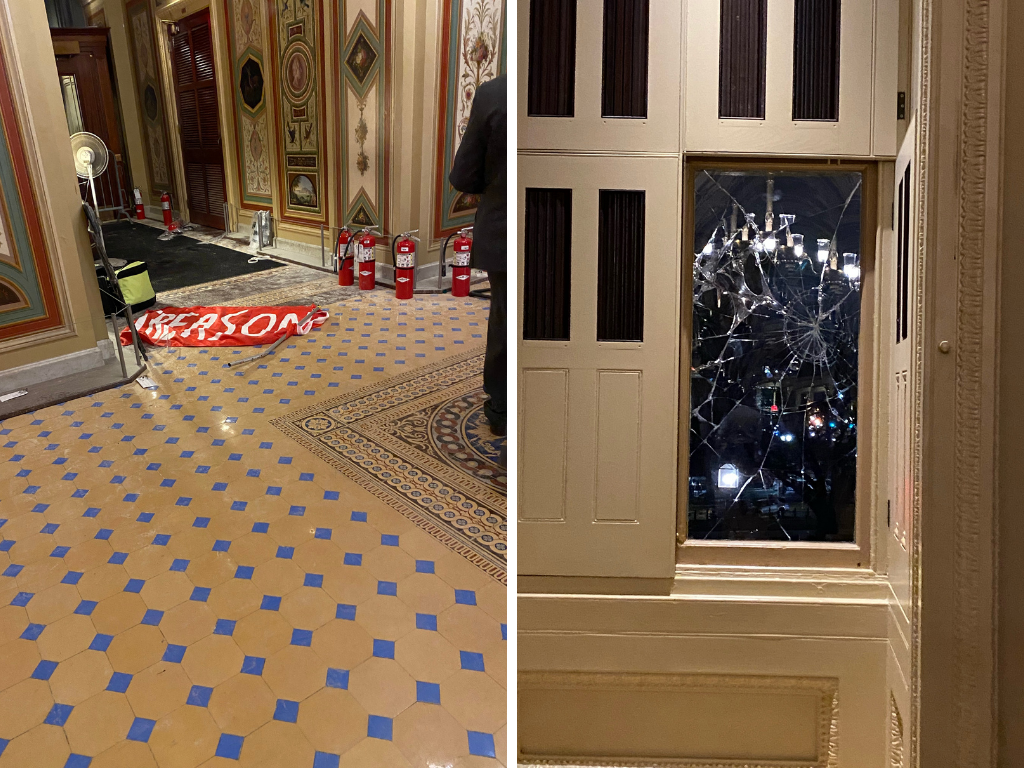 “The events that have transpired today have forced me to reconsider and I cannot now in good conscience object to the certification of these electors” https://t.co/XNcTEnELmr pic.twitter.com/J6hN5t03H6

Loeffler lost in a special runoff election to Democrat Rev. Raphael Warnock early Wednesday morning. Sen. David Perdue (R-Ga.), who lost to Democrat Jon Ossoff at the same time insurrectionists were storming the Capitol, did not participate in the certification of ballots because his term ended on Jan. 3.

Alex Wellisch (23C) was returning to D.C. with friends after spending a week and a half in Georgia canvassing for Warnock and Ossoff when he began seeing reports of the riot on social media. Navigating shifting curfews, Wellisch stayed with a friend in Maryland before finally arriving home late at night.

“On the drive down, most of our energy was like, ‘Oh my gosh, like if this could really happen, like two Democrats, elected to the Senate. That’s crazy,’” Wellisch recounted. “And then by the end of the day that just seemed like such a small piece of information, almost irrelevant.”

Despite feeling disheartened to see D.C. “overrun” and angered by Trump’s lack of action to stop the riot, Wellisch found hope in the completion of the election certification process where many senators reaffirmed its legitimacy.

University President Gregory L. Fenves denounced the siege in a Wednesday tweet, stating the violence was “antithetical” to American ideals.

“The Emory community stands united by these ideals and with great concerns for all those who have been impacted by the violence in D.C.,” Fenves wrote.

Former U.S. President and Emory University Distinguished Professor Jimmy Carter called the siege on the Capitol a “national tragedy” in a statement Wednesday.

“Having observed elections in troubled democracies worldwide, I know that we the people can unite to walk back from this precipice to peacefully uphold the laws of our nation, and we must,” Carter wrote.

“Trump’s party is not our party, this is not conservatism, this is not America,” the statement read. “Domestic terorrisim will not be tolerated and we support any means necessary to remove these insurrectionists from our nation’s capitol.”

In a Jan. 6 email to the Wheel, President of the Young Democrats of Emory Alex Chanen (21B) called for Trump’s removal from office, crediting Republican political rhetoric and “white nationalist and racist ideology” for inciting the mob.

While Chanen wrote that Fenves “was right to condemn what happened today,” he expressed disappointment in the Univeristy’s past responses to “racist and bigoted rhetoric” on campus as well as Fenves’ record of political engagement.

Emory’s chapter of President of Fair Fight U Alexis Greenblatt (21C) condemned the insurrection and congratulated Warnock and Ossoff in a Jan. 7 statement emailed to the Wheel.

“The domestic terrorists who invaded our nation’s capital have been deluded for weeks into believing that the November election was fraudulent,” Greenblatt wrote. “We will continue to push for comprehensive voter education on every level in this country and especially in the state of Georgia so that a reaction like this never happens again.”

Several faculty members in the political science department signed an open letter from political scientists calling for the removal of Trump from office, either through impeachment or the invocation of the 25th amendment of the U.S Constitution.

Professors of Political Science Jeffrey Staton and Tom Clark as well as African American Studies Professor Pearl K. Dowe, among others, signed the petition as of Thursday afternoon.

Staton, chair of Emory’s political science department, said the letter followed Trump’s repeated challenges to the election process, including Trump’s incendiary speech prior to the Capitol riots, actions that Staton said “would qualify as a high crime or misdemeanor.” Staton continued that Trump also violated his constitutional obligation to uphold the rule of law in interrupting the electoral vote count.

““There is no disagreement about a core feature of democracy, which is that democracy means at its core that we transfer power peacefully, through free and fair elections,” he said.

Staton’s decision to sign the letter was part of his ongoing intention to encourage others to “do more than vote,” aiming to set a model of political engagement for his family, students and broader academic community.

Dowe said the letter was signed by both Democrats and Republicans, emphasizing its focus on shared democratic values “regardless of personal ideology.”

“What we saw yesterday, and what we have seen over the last four years, really is in direct contradiction to the premise of this American political experiment,” Dowe said. “So I felt it was the least that I could do, to add my voice publicly.”

Dowe also expressed hope that the threat of the recent events would spur an increased investment in civic education and pedagogy around Black politics, which she has advocated for in the past.

“If we continue to, one, disregard civics education and the value of social sciences and what we offer, and then not just that but how we teach it and the people that we remove from the conversation, then we are contributing to this problem.” Dowe said.

Clark said that while political scientists typically avoid directly engaging in politics, he signed the letter.

“If [academia] is ever to have a practical implication, it’s now,” Clark said.

Clark said while he feels “hopeless and helpless,” he encourages students to become civically engaged.

“I encourage all of you to go out into the world and effect change, about the things that are bothering you in the world,” Clark said. “Don’t be like the traitors that we saw yesterday..”