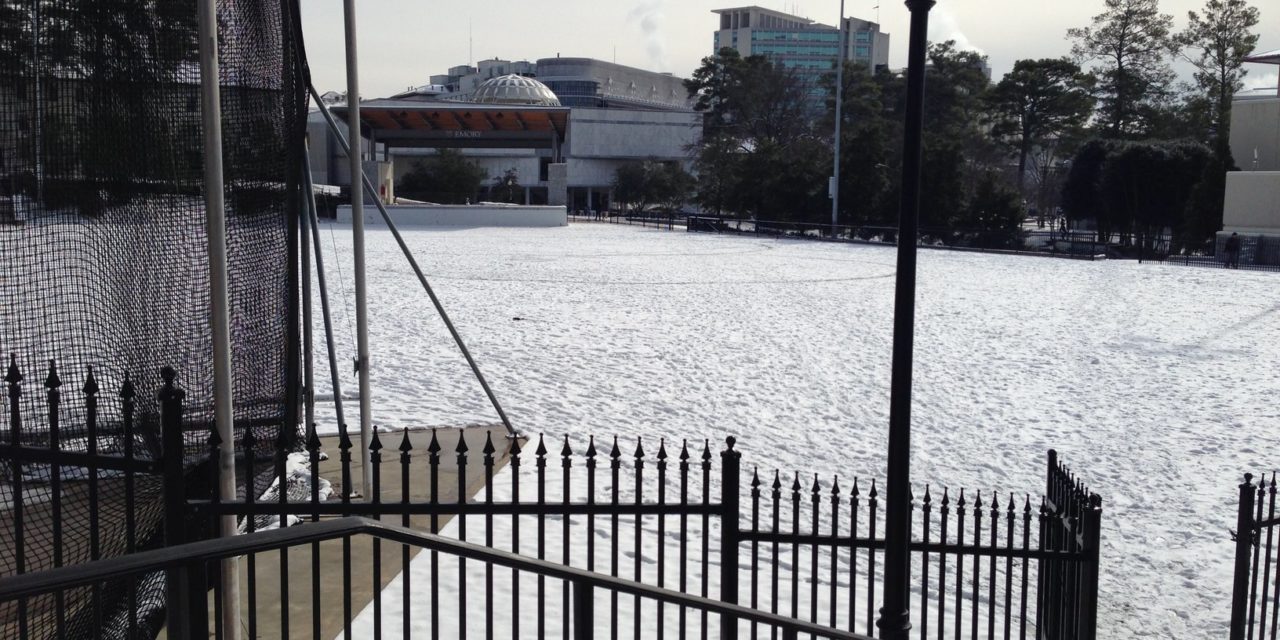 Vice President and Deputy to the President Gary Hauk sent an email Monday announcing the closure of the University due to anticipated severe weather conditions, while Emory Healthcare staff operated as usual.

Hauk wrote that closing a day before the anticipated weather was done out of “an abundance of caution” for the Emory community.

“We do not want to expose members of the Emory community to the possibility of a repeat of the city’s experience two weeks ago,” Hauk wrote in an email to the Wheel. In addition, local schools being closed provided childcare issues for many employees, Hauk wrote.

After the debilitating storm in January, Georgia Governor Nathan Deal declared a state of emergency for over 40 counties including DeKalb, where Emory is located, and businesses all across the state closed down early in anticipation of a storm of “epic and historical proportions,” according to a Feb. 14 Politico article.

On Emory’s campus, many dining options were open for shorter hours on Tuesday, including Highland Bakery, Zaya at Dooley’s Den at the Depot and Dunkin Donuts, among others.

Nancy Seideman, Emory’s interim vice president for communications and marketing, sent an email announcing Emory would close on Wednesday, due to the continued concern of severe weather conditions facing campus.

An analysis by the Office of Critical Event Preparedness and Response (CEPAR) showed that a combination of windy conditions, snow and ice warranted the closure of the University, according to Sam Shartar, senior administrator for CEPAR.

In an email to the University on Wednesday, Seideman announced that Emory would remain closed on Thursday due to continuing severe weather and adverse travel conditions.

The University was opened on Friday, according to an email sent by Seideman, but community members were encouraged to use great caution when traveling around campus.

“Personal safety is a concern for all who commute under these conditions, and managers are encouraged to be flexible regarding staff reporting times, as road conditions near staff members’ homes may necessitate late arrival,” Seideman wrote in an email to the Wheel.

Seideman also cautioned people walking around campus to be aware of possible falling ice from buildings and trees.

The Right Thing, The Right Way

Karen Salisbury, chief of staff for Campus Services said that while the ice posed a different challenge for her staff than the previous winter storm, the level of professionalism and preparedness surpassed anything she had seen in her time at Emory.

“We did quite a bit of after-action evaluation from the previous storm and were able to improve on the gaps we identified for this weather incident,” Salisbury said. “Most of the difference came from a remarkable group of individuals doing the right thing, the right way for the right reasons.”

Members of the Emory community worked around the clock to ensure walkways were clear, food was served and students were safe during the University’s closure, Salisbury said.

Employees from Campus Services arrived as early as 5:30 a.m. to keep entrances salted and pathways clear around residence halls and the Dobbs University Center, Salisbury said.

In one example of the community coming together, the Office of Fraternity and Sorority Life shared that members of Pi Kappa Alpha (Pike) fraternity grabbed shovels and cleared the sidewalk in front of the sorority lodges one morning.

Salisbury said that this storm brought out several contingency plans for loss of power, but her team never executed them, as power stayed on for the campus the entire week.

“We’ve got a great infrastructure in place for these types of situations,” Salisbury said. “We [were] just going through all the ‘what-if’ scenarios just in case.”

The success of Campus Services could not have been possible without other members of the University coming together, Salisbury said.

“As always, we are thankful for the great collaboration with Residence Life and DUC Dining to make it easy for our teams to get a warm meal and rooms and linens for sleeping,” Salisbury said.

After Hauk’s email Monday afternoon announcing the University’s closure, Emory students took to social media to express their excitement and frustrations with the closure using the hashtag “#ThanksGary.”

Several Twitter, Facebook and Instagram posts cropped up thanking Hauk for things ranging from extra time to work on a thesis to a postponed physics midterm.

College freshman Mary Hollis McGreevy had a notable reaction to the cancellation of school – responding “THANK YOU ???????” to an all-Emory email listserv – and was not as excited this time around as some of her peers.

“I was excited to have school cancelled at first because [my hometown] Charleston, S.C. never gets any snow,” McGreevy said. “I think this snow week wasn’t as great because now I am seriously concerned about catching up in all my classes.”

After Seideman sent out sent out the emails that announced the University’s Wednesday and Thursday closure, a similar “#ThanksNancy” hashtag emerged, with an accompanying Facebook page that sported posts such as the Student Programming Council logo with the words “We Do Nancy’s Dirty Work.”

When asked about their newfound recognition and acknowledgment among the student body, both Hauk and Seideman embraced the viral response and were pleasantly surprised and amused with what students wrote.

“The social media flurry was quite amusing,” Hauk wrote in an email to the Wheel. “It prompted messages from people I hadn’t heard from in a long time (#ThanksOutOfTouchFriends) and alumni and family from around the country chimed in.”

Hauk did note that while he enjoyed most of what he called his “Warholian fifteen minutes of fame,” he jokingly said some “creepy tweets” and the picture of his face on the hawk might haunt his dreams.

Hauk wrote that the decision to have the announcements come from Seideman and the communications team was out of a desire to have his colleagues share the social media love.

Seideman wrote that while her family never understood exactly what her job entailed, having her own Facebook fan page gave them better insight and was an impressive achievement.

“I love the picture of me photoshopped onto the purple outfit,” Seideman wrote.

Seideman added that while she appreciated Hauk sharing the social media popularity surrounding the school closures, she hopes it did not take a hit after sending the announcement that school would open Friday.

“I know that I took it on the chin calling school back in session Friday,” Seideman wrote. “I wanted to leave [Hauk] as the hero of the week.”

And after reading numerous posts wondering if Seideman took over school announcements after leaving Hauk adrift somewhere on campus, Seideman joked that that wasn’t the case – for now.

“[Hauk] is alive and well. I did not leave him abandoned in a snowbank,” Seideman wrote. “Although if my Facebook likes don’t climb past Hauk’s soon…”