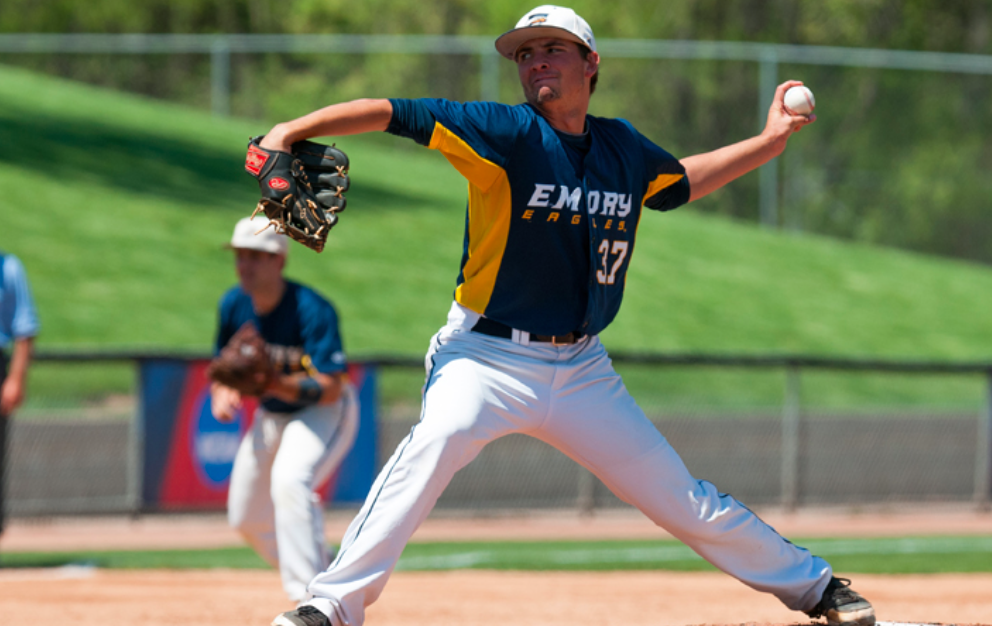 The Eagles opened tournament play against Washington University in St. Louis (Mo.), winning 3-1. The star of the game was junior pitcher Jackson Weeg. Weeg threw almost the whole game, giving the ball to junior reliever Kyle Monk with one out left in the ninth. Weeg gave up one run over the course of the game, surrendering five hits but striking out six. Weeg moved to 4-0 on the season after getting the win, and Monk picked up his sixth save. At the plate, junior third baseman Philip Maldari drove two runners in on a pair of singles, and junior left fielder Wilson Morgan singled three times.

In the second game of the tournament, Emory fell to Case Western Reserve 4-3 in a game that was decided late in the eighth inning. After Case Western tied the game at 3-3 in the seventh, they managed to score the go-ahead, thanks to a throwing error from the Eagles’ sophomore first baseman Bubby Terp. Senior center fielder David Coble drove in a pair of runs, and senior first baseman Ben Vizvary earned a free pass three times. In addition, senior right fielder Chris Slivka was a perfect four for four with four singles. Junior pitcher Hans Hansen had a good game on the mound, throwing six and two-thirds innings, striking out four and allowing three runs, two of them earned. Monk took the loss, his first of the season, after giving up the go-ahead run.

Emory faced off against Brandeis University (Mass.) in the third game. Emory won the game 7-4, moving to 2-1 in the tournament. Freshman pitcher Billy Dimlow worked into the seventh inning, allowing eight hits and three runs in the process. Dimlow also managed to strike out five before his departure with two outs in the seventh. Dimlow was relieved by junior reliever Luke Emmet, who threw the remainder of the game. Dimlow earned the win and moved to 3-0 on the season. Vizvary had another strong game, going two for four with three RBI. Sophomore Nick Chambers also played well, going two for four with a double and two RBI.

Emory next played the University of Rochester (N.Y.), and senior pitcher Paul Merolla stole the show. In the 5-0 win, Merolla threw a complete game shutout to earn his second win of the young season. Merolla allowed six hits and a walk but struck out eight in a masterful performance. The Eagles scored all five of their runs in the seventh inning, thanks in large part to junior designated hitter Brian Hernandez’s grand slam. Following the win, Emory moved to 3-1 in the tournament.

After a dominating pitching performance against Rochester, the pitching staff struggled against New York University, leading to a 8-5 loss. Junior pitcher Tyler Sprague, sophomore pitcher Mack Wilkins and Emmet each gave up a pair of earned runs, and Monk allowed one, as well. Emmet picked up the loss, which was his first loss of year. Hernandez once again had a solid game, driving in a pair of runs. Sophomore catcher Mitch Kerner went three for three in the game.

After a high scoring affair the day before, the Eagles fell to Wash U in a tight 3-2 ball game that went into the tenth inning. Weeg got the start for the second time in the tournament, and went eight strong innings while giving up one run. Monk replaced Weeg in the ninth inning. After the Eagles managed to score a run in the top half, Monk gave up a two-run walk-off home run to the Bears, which got him his second loss of the tournament and season. In a game that saw little offense, Morgan and junior catcher Chris Young drove in a run apiece. The loss saw the Eagles fall to 3-3 in the tournament.

Emory rebounded from a pair of tough losses to defeat Case Western 3-2 thanks to a three-run fourth inning. Coble drove in the Eagles’ first run of the game with a RBI single, and then two more Eagles came home thanks to a wild pitch and a Case Western throwing error. Hansen started his second game of the tournament and worked into the eighth inning. Hansen left the game with two outs in the seventh after allowing two runs, seven hits and striking out four. The outing was good enough to give Hansen his fourth win of the season. Monk finished the game with a solid four-out performance, earning his seventh save of the year.

In the final game of the UAA Championship Tournament, Emory topped Brandeis 9-3. Senior second baseman Dylan Eisner had his best game of the tournament, going two for four with two doubles and four RBI. Hernandez finished with a pair of singles and a RBI, and Vizvary also drove in a run. Dimlow threw five innings to earn his fourth win of the year after allowing only two runs and striking out five. Emmet, junior pitcher Andrew Doetsch and sophomore pitchers Danny Kerning and Rhett Stuart each pitched an inning each to finish the game.

The Eagles ended the tournament 5-3 to move their overall record to 15-5 on the year. Emory will rest before their next game on Friday, March 18 against Covenant College (Ga.).