The Emory baseball team’s four-game winning streak came to a close this weekend as the Eagles dropped two games in a three-game weekend series against Covenant College (Ga.). The Eagles hosted the first game of the series on Friday at Chappell Park. The teams then got together at Lookout Mountain, Ga. for a doubleheader hosted by Covenant. The Eagles fell 4-2 on Friday, before splitting the doubleheader on Friday.

On Friday, Covenant took an early 1-0 lead in the top of the fifth inning, but their lead did not last long.

The Eagles tied up the game on a sacrifice fly off the bat of junior infielder Ryan Toscano scoring junior infielder Jared Kahn. After a double steal, a groundout to the second baseman by senior infielder Mark Lindemann scored junior outfielder Daniel Iturrey to put Emory up 2-1.

The Eagles would keep this lead going into the ninth inning, courtesy of a stellar pitching performance by sophomore Connor Dillman. Dillman struck out three batters in the first eight frames, allowing four hits and a single unearned run.

Dillman tried to close out the game in the ninth, but after a pair of leadoff hits he was pulled from the game. Sophomore right-handed pitcher Graham Bloomsmith was called in to relieve Dillman, but by then the damage was already done. Bloomsmith allowed both inherited runners, along with an additional unearned run, to score, and Covenant went on to win the game 4-2.

Dillman was credited with the loss, dropping his season record to 2-3. He threw 116 pitches in the game.

Covenant carried their late-game momentum from Friday into Saturday, immediately jumping out to a 3-0 lead in the first two innings of the first game of the double header.

Emory refused to go down quietly. Freshman second baseman Dylan Eisner hit a three-run double in a four-run fourth inning for the Eagles, putting the team up 4-3. Eisner went two-for-three on the game with three runs batted in (RBIs) and two stolen bases.

Going into the seventh and final inning of the game, Emory led 5-3. Unfortunately for the Eagles, Covenant had one more last inning comeback in them. Down to their last out, Covenant sent freshman infielder Perry Rigby to the plate. Rigby launched a walk-off three run homerun off of Emory freshman right-handed pitcher Tyler Sprague, to give the team a 6-5 victory.

In the second game of the doubleheader, Emory bounced back from its second consecutive heartbreaking loss and cruised to an 8-1 win over Covenant.

The Eagles got on the board early, when sophomore outfielder Brandon Hannon scored on an RBI single off the bat of junior catcher Jared Welch. The real offensive fireworks came in the top of the third and sixth innings. Emory tallied three runs in the third inning and an additional four in the sixth inning, to go up 8-1.

The team would go onto win the game by that score, when junior right-handed pitcher Matt McMahon came in to relieve freshman Dylan Finer for the final two innings.

Finer allowed four hits on the day, striking out one and allowing only a single earned run on the game. The game marked the first win of Finer’s career.

The Eagles are now 13-11 on the season and in third place in the University Athletic Association (UAA) with a 4-4 record in conference play.

The team will return home on Wednesday to take on Birmingham-Southern College (Ala.) on Wednesday, April 3 at 3 p.m. The game will be played at Chappell Park.

Focus Set Strongly on the Present for Men’s Tennis 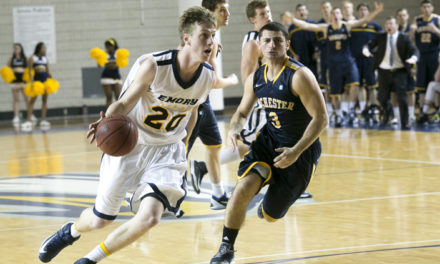 A Look Into The Eagles Lockeroom At Halftime