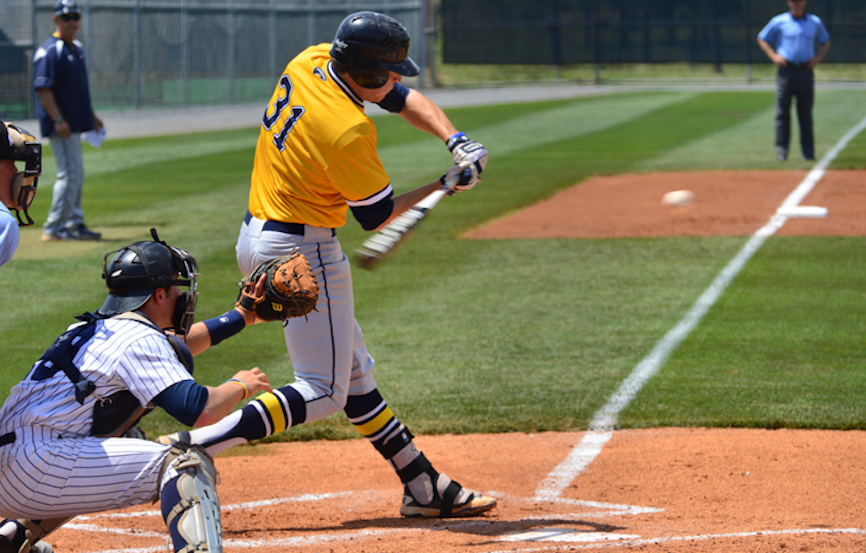 Sophomore first baseman Bubby Terp was named Most Outstanding Player of the Southern regional tournament after hitting .556 and driving in 13 runs over the four-game stretch.

“Every year, some guy steps up, and this year it was Bubby. Bubby has stepped [up] since [senior first baseman Ben] Vizvary was hurt earlier in the year,” Head Coach Mike Twardoski said. “You just can’t foresee guys hitting like he did during the tournament.”

Terp credited his performance to the work he put in over the course of the season.

“Everything just kind of came full circle for me during the tournament,” Terp said. “It’s nice when school stops and you just have to worry about baseball.”

Twardoski also noted that some of the players had begun to call Terp “Bubby Ruth.”

“Thats a nice compliment, but a little much I think,” Terp said.

The Eagles started their week off with a game against Thomas More, winning 6-5. Junior pitcher Jackson Weeg got the start for the Eagles and struggled. He  went five innings, allowing five runs. He was relieved by junior pitcher Kyle Monk, who shut down the Saints over the remaining four innings of the game. Terp was the star of the game: he finished the game with four RBIs, three of which came from a three-run home run in the third inning. His fourth RBI came on a sacrifice fly an inning later.

Next, Emory faced off against Marietta, topping the Pioneers by a score of 8-0. Junior pitcher Hans Hansen kept Marietta from getting anything going at the plate, throwing the entire nine-inning game while allowing only seven hits and striking out five. Five Eagles finished with multiple hits: seniors center fielder David Coble and second baseman Dylan Eisner and juniors left fielder Wilson Morgan and designated hitter Brian Hernandez finished the game with two hits apiece. Terp adding three hits as well. In addition, Hernandez and Terp drove in two and three runs, respectively.

Emory then took on Shenandoah in a three-game series. However, the Eagles wrapped up the series in two thanks to an impressive showing at the plate. Emory won the first game 14-7 and the second 15-2.

Freshman pitcher Billy Dimlow struggled after getting the start in game one, allowing six Shenandoah runs in only three and one-thirds innings. However, the bullpen trio of sophomore Luke Emmett and sophomore Mack Wilkins and Monk shut down the Hornets. They collectively allowed only three hits and one run over the remainder of the game. Terp continued his hot streak, this time by pounding out three hits and knocking in four runs. Junior catcher Chris Young also contributed four of Emory’s 12 hits on the day.

In the second game of the series against Shenandoah, Emory won 15-2. As a part of the 15-run explosion, Emory once again had five players drive in two runs each: Morgan, Hernandez, Terp, senior third baseman Philip Maldari and freshman designated hitter NJ Kim. Morgan also drew an astounding five walks over the course of the game. Senior pitcher Paul Merolla started for Emory and threw seven solid innings. He allowed only four hits and two runs, one of which was unearned.

Twardoski praised the team’s effort as a whole throughout the tournament.

“It’s hard to name only a few guys who stood out,” Twardoski said. “We played great defense and had a bunch of timely hits. Everybody played well.”

Emory will take on the New York regional champs, State University of New York College at Cortland (N.Y.) (41-6) in Appleton, Wis. Friday, May 27, to kick off the College World Series.

“We just need to keep doing what we’ve been doing all year,” Terp said regarding to the College World Series. “We need to take it one game at a time and prepare just like we would for any other opponent.”

Twardoski believes that staying in control off the field while continuing to put in work on it is crucial to succeeding at the next level. He also highlighted the level of competition that the team will face in the College World Series.
“We have to just go play, no matter who we’re playing each game,” Twardoski said in regards to the upcoming game against Cortland State. “Every team we play is going to be good, and we can’t make mistakes.”