Emory artist-in-residence Charmaine Minniefield discussed the inspiration behind her artwork at an Emory University event “Remembrance as Resistance: The Praise House Project” on Sept. 30, which revisited a traditional ritual, and its role in acknowledging our history today.

“We gather in this circle as collaborators, artists, and activists,” Minniefield said. “We gather to remember. We gather, in this moment of reckoning, to acknowledge the difficult past of an institution that has established systems of wealth and white supremacy.”

The event, which was part of their three-day “In the Wake of Slavery and Dispossession” symposium took place in the Emory Student Center. The project is supported by the National Endowment for the Arts and presented by Emory Arts in collaboration with the Carlos Museum and the Stuart A. Rose Library.

Through their art, they said they hope to explore African American history, memory and ritual as resistance against Black erasure. The Praise House project, a public art installation coming to Emory on Oct. 24, pays homage to their ancestors and aims to reclaim the space lost through years of oppression.

“Our work is influenced by history,” Minniefield said. “It goes into the archives; we call it the black narrative.”

The panel discussion focused on a multimedia video collage made of multiple layers and a song, depicting the “Ring Shout.” This event is a traditional African American form of worship involving gathering in a circle and engaging in full-body rhythmic movements like stomps and claps. 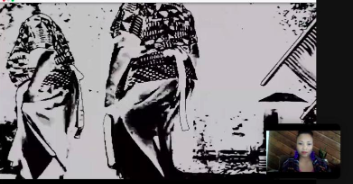 At the “Remembrance as Resistance: The Praise House Project”, one of many events included in Emory University’s “In the Wake of Slavery and Dispossession Symposium”, panelists discussed a multimedia video collage on the history of the traditional ritual the “Ring Shout” on Sept. 30. (Mitali Singh)

Created during enslavement, the “Ring Shout” draws from Indigenous tradition in West and Central Africa, particularly amongst the Yoruba, Akan, Angola and Bantu people. Some of these influences include rhythms, syncopation and clapping. The “Ring Shout” would take place inside “Praise Houses,” which were structures on plantations used as places of communion by enslaved people. During a time when slave owners attempted to diminish all traces of African culture and traditions, it acted as a safe space to recall.

“Because we couldn’t have drums, which was a form of communication, we made the floors of the praise houses our drums,” Minniefield said. “Our communal drums; the entire structure was our instrument that we tuned with our voices.”

During her 13-month artist-in-residency in The Gambia, Minniefield traced back her great-grandmother’s lineage on the coasts of The Gambia and Senegal, leading to discoveries about her ancestors and the origin of the ‘Rain Shout,’ which inspired the artwork.

“I searched for my family through my remembrance of self and the ancestral memory encoded in me through my cultural identity, creative expression, dance and song,” Minniefield said.

However, panelists said this work seeks to go beyond just remembrance, as they explained they were insistent on using their art to cause disruption of the ongoing erasure of our history in the current social landscape.

“I’m writing about transcending performance; going beyond solely performing for the person who wrote the music, who is considered equivalent to god, and is almost always a man,” Taylor said. “I write about instead stepping out of my body, using my institution and ancestral code to connect to something greater than myself.”

Adeola Adelekan (24C) volunteered at the event and emphasized that the message was important and needed to be spread.

“It was exciting to see the audience’s reactions to the art,” Adelekan said. “I could tell their eyes were opened to this knowledge.”

The Praise House project will feature art installations in three different locations and will acknowledge the African-American history of these communities. Visitors can experience the work at the South-View Cemetery from Oct. 24, 2021 to Juneteenth on June 19, 2022.

The art will also be on display in Decatur Square in January 2022 and at Emory in September 2022. Minniefield’s solo exhibition “Indigo Prayers” opens in Spring 2022 at the Michael C. Carlos Museum.