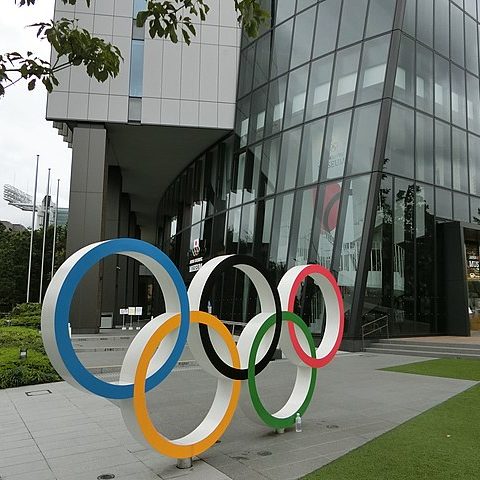 Just over four years after graduating from Emory University, Andrew Wilson (17C), the first NCAA Division III swimmer to qualify for the Olympics, tied for sixth place in the finals of the 100 breaststroke. Wilson, whose story has been well documented, also secured a spot to compete in the 200 breaststroke at the Tokyo Games, with the first prelim to be held on July 27.

All swimming events are held in the Tokyo Aquatic Centre, a highly innovative building completed in February 2020 that can hold 15,000 people. However, due to COVID-19 restrictions, all Olympic events have taken place in empty stadiums — quite a different environment for Wilson, who competed in front of a packed crowd in Omaha, Nebraska, for the U.S. Olympic Swimming Trials on June 17.

Let’s take a look at Wilson’s journey throughout all three rounds of the 100 breaststroke.

Wilson swam in lane three and placed sixth out of eight in his heat for the first 50 meters with a time of 27.94 seconds. This was a bit slow compared to Wilson’s performance at the U.S. trials, where he placed second in the 100 breaststroke with a 50-meter time of 27.77.

Despite his slow start, Wilson hit his stride in the last 50 and finished second in his heat with an overall time of 59.03. After the rest of the competitors had raced, Wilson’s time ranked seventh overall — advancing him to the semifinals.

The next day, Wilson returned to the pool to compete in the semifinal race. Only the top eight times from this round would advance to the finals.

The times in the first semifinal were slower than expected, which gave an advantage to those swimming in the second semifinal because they knew exactly what time they needed to advance. Wilson swam in lane six, alongside fellow American Michael Andrew in lane five.

Wilson was much quicker off the block this round, posting a time of 27.73 the first 50 meters, placing him fifth in his heat. In the last 50, Wilson’s pace slowed; fortunately, he maintained fifth place and finished with a time of 59.18, edging out German swimmer Lucas Joachim Matzerath for the eighth best time by 0.13 seconds.

Andrew finished the 100 in 58.99, joining Wilson as the other American in the finals.

.@SwimmerMichael and Andrew Wilson will swim for a chance at gold in the men’s 100m breaststroke final!@TeamUSA x #TokyoOlympics

The medal round took place on July 26, with Wilson in lane eight and Andrew in lane two. As expected, the pace was faster in the finals, and Wilson’s first 50-meter time of 27.83 had him in last place. After the turn, Wilson made up for it with a total time of 58.99, tying for sixth with China’s Zibei Yan — his fastest time yet.

Andrew, who posted a time of 58.84, just missed the podium. Great Britain’s Adam Peaty claimed gold in the event for the second straight Olympics, while the Netherlands’ Arno Kamminga and Italy’s Nicolo Martinenghi earned silver and bronze, respectively.

Although the 100 is over, Wilson is not done competing in the Olympics. He is also swimming the 200 breaststroke heats which begin at 6:35 a.m. EST on July 27. His races can be streamed here or on the NBC Sports app.