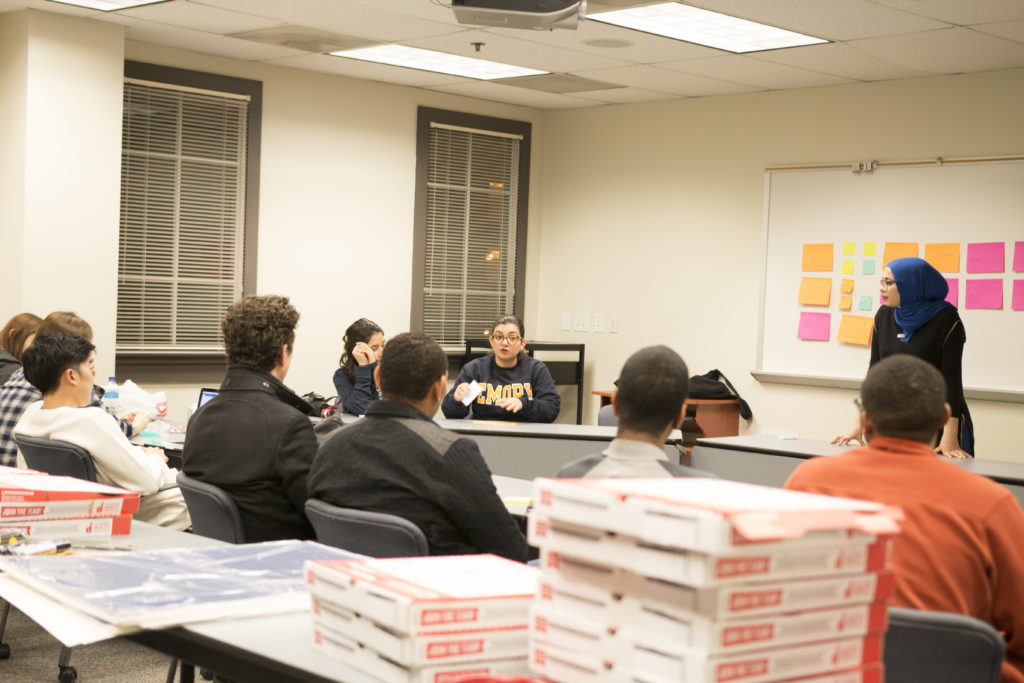 Sheba Ehteshami, co-organizer of the Atlanta March, talks with Emory community members about her motivation for and experience with creating a demonstration for women’s rights. | Ruth Reyes, Photo Editor

Emory alumna Sheba Ehteshami, a coordinator of the 60,000 person Atlanta March for Social Justice and Women, addressed over 30 members of the Emory Community Wednesday, Jan. 18, urging them to “find something that gives them meaning.” After being diagnosed with a chronic illness that resembles leukemia as a sophomore, Ehteshami dedicated a significant part of her life to civic engagement, aiming to inspire others to uplift their own communities. In an interview with The Emory Wheel on the Thursday preceding the march, Ehteshami discussed her inspirations as an activist  and her involvement in organizing the march that took place Saturday, Jan. 21. This is an edited transcript.

The Emory Wheel: What was the organization process like?

Sheba Ehteshami: We originally started with a group of four women, including myself, who were, and are, really the sole organizers of the entire march. The most important component of building the march is making sure that we had buy-ins from sponsors and … relationships built in the community where we would actually get support for what we were trying to do.

Outreach is something that we are still doing even up until the 11th hour of the march: making sure that we have enough support from the community, from large and small organizations, people who are going to come out and support the cause. The marketing and publicity took a long time and so did getting alignment with some of our public leaders who are going to come and speak with us at the march on Saturday.

EW: How did the process make you feel?

SE: Awesome! It could be a room of five people but being able to hear about how this enables them to do more in the community, feel supported and comforted is amazing. I mean, that’s the only reason why I do this. It has nothing to do with me and everything to do with everybody else.

EW: Where did the idea of having the march come from?

SE: When I was a student, a lot of my civic engagement was with Hands on Atlanta and I was an after-school teacher for a couple different elementary schools on the Southside of Atlanta. It was cool, but I felt like I could do more, which is why I ended up applying for the servant leadership program and spending a couple of months at the MLK Center. What was eye opening for me, though, was … being able to facilitate some of those educational programs that they do for kids in the community and just seeing how you can be in a room full of 10-year-olds who know nothing about the stresses of life, the trials and tribulations of life … but to give them a sheet of paper and a pencil to draw with and to see their eyes just illuminate. It was kind of like, ‘[…] Why am I not being more actively engaged and involved with just people of different walks of life?’ That kind of got me into public health. That kind of got me into civil engagement, and that kind of got me into being more compassionate for lots of different people.

EW: What is your involvement in the march?

SE: I started off as the director of programming. Now I am on the outreach committee, so I spend a lot of time making outreach to some of the larger organizations because of my connections.

EW: How has Emory and your graduate study influenced your work? You said you didn’t really get involved much during your time at Emory, but wish you had, so what kinds of things do you think Emory offers that allows for empowerment in the community?

SE: My influence for getting to where I am in terms of all the civil engagement and things have to do with my very personal experience of getting chronically ill and being told that I was going to die…  the American dream is not just getting a job, or buying a house or getting a dog. It is about enabling a community and supporting your peers. It is about showing love, giving love and respect. And those are things that I didn’t necessarily put at the forefront until I got sick and until I realized that there is a whole lot more to life than just these tangible things that we seek on a day-to-day basis. Emory has a lot of access to different organizations in the community. The Carter Center is a great example. It is an internationally renowned organization that has just about any kind of department or branch that you can volunteer with… The CDC is right around the corner if you’re interested in public health. The opportunities are really and truly endless when you go to a university like this, and I didn’t see it until it [was] a little too late.