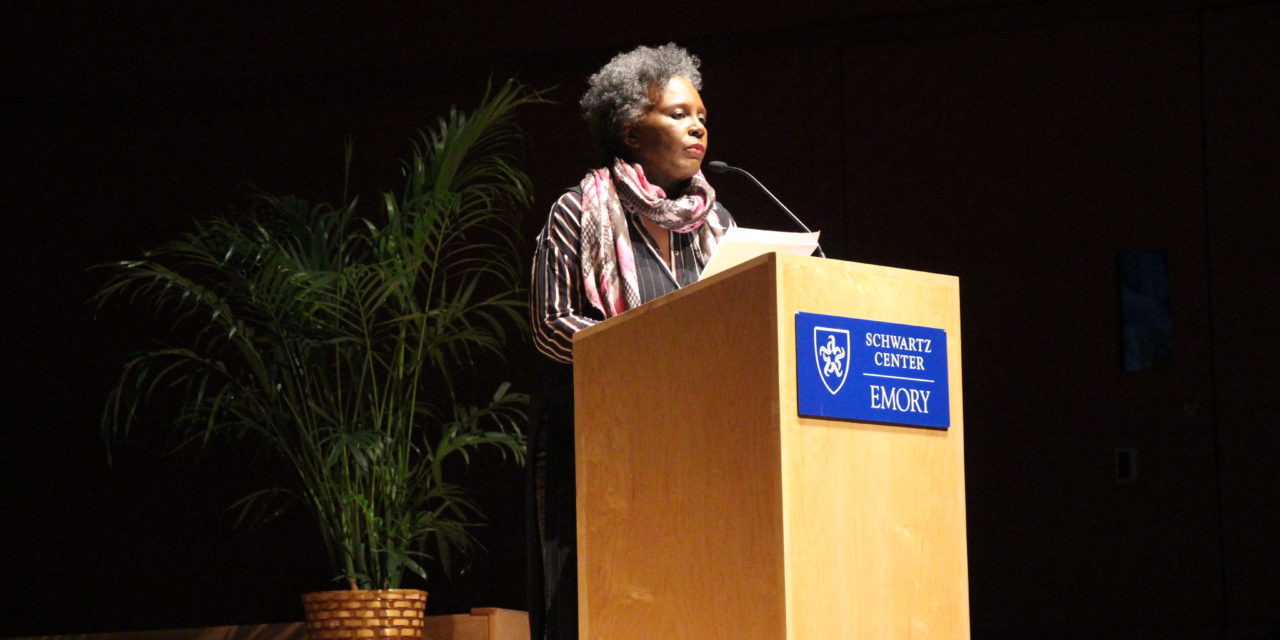 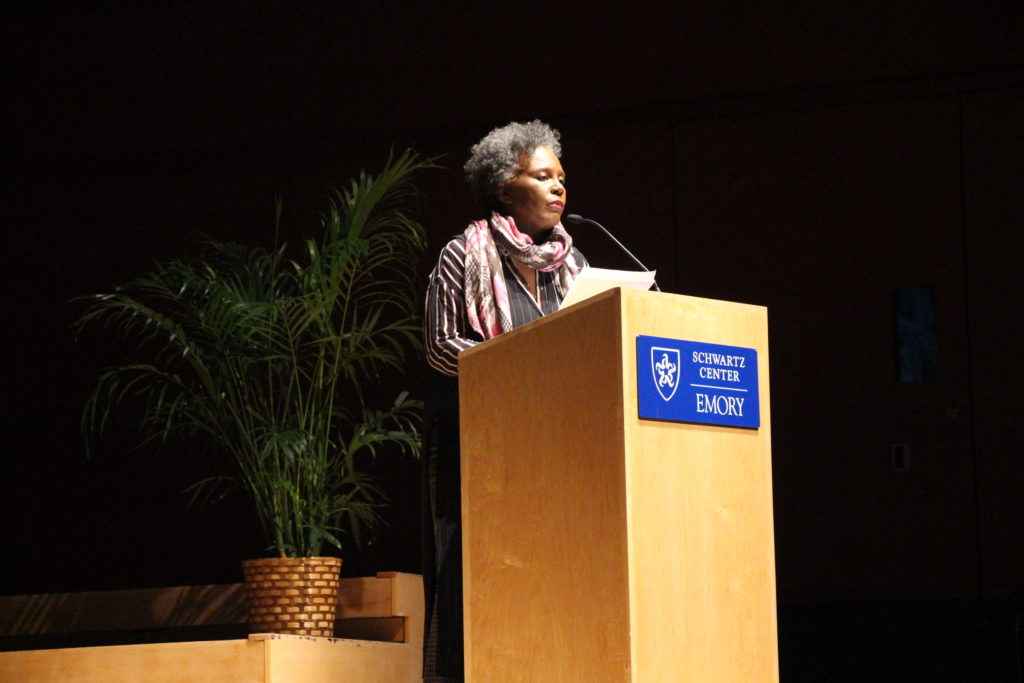 Emory University hosted award-winning author and Fredrick Iseman Professor of Poetry at Yale University Claudia Rankine as a part of the Richard Ellmann Lecture Series in Modern Literature from Nov. 7-9 at the Schwartz Center for Performing Arts.

The lecture series first started in 1988 and has had 13 iterations since. The series commemorates the late Richard Ellman, who was the biographer of James Joyce and Oscar Wilde and served as the first Robert W. Woodruff professor at the University from 1980 until his death in 1987.

The first event, a lecture held on Thursday, discussed the role of poetry in intervention against racism, and drew on the work of curator Denise Murrell in studying Édouard Manet’s 1863 painting “Olympia” and the work of Literary Scholar and Cultural Historian Saidiya Hartman.

Rankine cited Murrell’s 2018 Columbia University oil painting exhibition, “Posing Modernity: The Black Model from Manet and Matisse to Today” in her analysis of the presence of black servants in Manet’s works. According to Rankine, the exhibition testifies to the lack of inclusivity in art history.

Murrell, who received a doctorate from Columbia in 2009, wrote her thesis on art historical representations of black figures after encountering little discussion in class regarding the black female figure in “Olympia.”

The thesis expanded into a groundbreaking show that ran from March to July 2019 at the Musée d’Orsay in Paris. Rankine claimed that such developments in academia began to occur only a decade ago due almost solely to Murrell’s scholarship and activism.

On Friday, Winship Distinguished Research Professor in Creative Writing and poet Jericho Brown introduced Rankine before she took the stage at the Schwartz Center. Rankine spoke about the intersections of poetry and nationalism, a core subject of her acclaimed 2014 prose-poetry book, “Citizen: An American Lyric.”

Rankine touted the work of The Racial Imaginary Institute in creating and challenging conversations and narratives about race and its manifestations in society. The Institute serves as a platform for “an interdisciplinary range of writers, thinkers, activists, and artists … to convene a cultural laboratory in which the racial imaginaries of our time and place are engaged, read and constrained.”

In the hour-long lecture, Rankine discussed the work of several poets and photographers who have addressed manifestations of race and nationalism in the United States.

She began with a discussion of 20th century German poet Paul Celan as an example of an author who combatted forgotten narratives from the Holocaust. She then moved on to discuss American photographer Mark Peterson’s series called “The Past is Never Dead.” The series showcases snapshots of white nationalism across the U.S. from 2005 to 2019 — images that evidence the media’s failure to cover contemporary racial and hate crimes and emphasize the widespread regrowth of supremacist hate groups.

Rankine also spoke about the works of American artist Nate Lewis, Chinese American poet Wendy Xu, Pomona College Loren Barton Babcock Miller Fine Arts Professor and visual artist Mercedes Teixido, and author Asiya Wadud. Rankine highlighted the artists as figures who confronted narratives of memory and forgetfulness about race and nationalism in the U.S. in their own ways. She spoke about the importance of spreading awareness of social injustices at home and abroad, including continuing acts of voter suppression and mass incarceration.

During the final event on Saturday, Rankine hosted a book signing and reading. She read a monologue, reflecting on how to better understand her unease toward white male hegemony. An actor took the stage to voice the white male exemplar of her unease, and Rankine responded to his qualms with intense stoicism. She spoke about her July 2019 New York Times article on white privilege, in which she expressed concern about responding to thousands of outraged readers who denounced the supposed universality of their privilege.

William Olson (19Ox, 21C), who attended the first lecture, said he was moved by the way Rankine made him reflect on his own identity.

“It felt like we were anywhere and everywhere at once,” Olson said. “I found it very hard not to reflect on who I was as a white male, and in what ways I contributed to the category of white men.”

“I also enjoy how she always seems to be the speaker of her [own] work,” Utech said. “Rankine unapologetically embraces her own experiences and transcribes them to help others better understand the role that race continues to play in our society.”