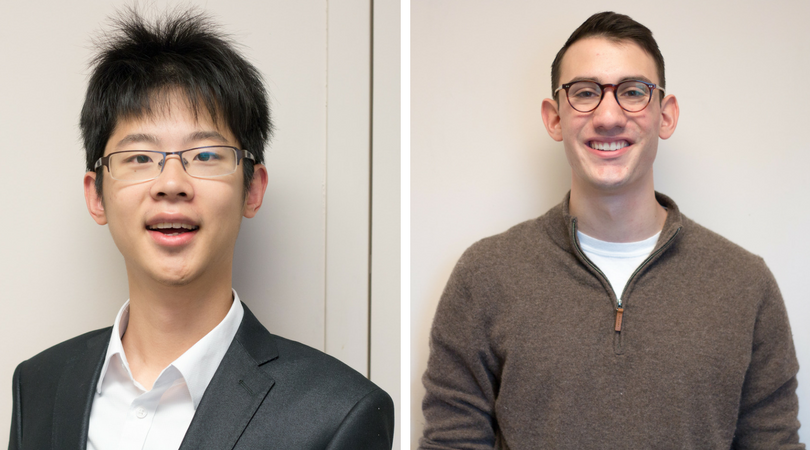 UPDATE (3/31/18 at 2:44 p.m.): This article has been updated to include the results from Graduate Student Government Association (GSGA)’s elections and statements from Elias Neibart (20C), Dwight Ma (17Ox, 19C) and William Palmer (18C).

Dwight Ma (17Ox, 19C) and Elias Neibart (20C) are heading to a run-off race to become the next Student Government Association (SGA) president, according to the Elections Board Vice Chair Andy Xu (20C).

The Elections Board mistakenly declared the SGA president ballot invalid and scheduled a re-vote on Friday night, but the Board later issued another statement stating that there would be a run-off between Neibart and Ma instead of a re-vote among all three candidates.

“Due to ongoing concerns on all three SGA Presidential candidates, and popular demands to initiate a re-vote,” the Elections Board initially called for a re-vote for the SGA president ballot in a March 30 email to students from Elections Board Vice Chair Andy Xu (20C).

SGA Speaker of the Legislature and Senior Representative William Palmer (18C) said that when he received the email regarding a re-vote, he immediately contacted Elections Board Chair Betty Zhang (20C) because re-votes are not permitted without SGA’s permission and are granted only under extreme circumstances. Palmer said there were no extreme circumstances in the SGA presidential race.

Earlier Friday, the Elections Board held a hearing regarding allegations of candidate misconduct against Ma and Karras. Two students alleged that Ma attempted to buy drinks for students in exchange for votes, and another two students accused Ma of trying to obtain votes by offering executive positions. In response, Ma filed a challenge against Karras for colluding with the challengers and creating “fake stories” about him. The Board did not release a decision on its cases by publication time.

Neibart has been criticized for his past comments against same-sex marriage. On March 31, Neibart added to his previous statement disavowing the comments.

“If the Emory community cannot trust me to lead their Student Government Association because of my past statements, I understand,” Neibart wrote. “However, I can ensure that I will do everything I can to make the LGBT+ community feel safe and supported if elected as your President … While I cannot take back what I wrote, I can promise the Emory community that I will work tirelessly to improve this campus if I become your President.”

Ma said it is hard to predict who will win the run-off.

“I think Elias is a strong candidate, and I will try my best,” Ma said.

More than 230 students signed an online petition, started by Angela Jiang (19C) on Friday, requesting that the Elections Board recall the undergraduate elections. “To ensure that we at least maintain our basic democratic rights in asking for fair, transparent elections, I am asking for the Emory Elections Board to institute a recall for this entire election, or at least a pause in the current cycle to fully investigate the numerous (putting it lightly) allegations against many major candidates,” the petition reads.

Hemal Prasad (20C) received 1,030 votes (82.80 percent) in an unopposed race for CC vice president. The position received 214 (17.20 percent) votes of no confidence. Students have the option to select a vote of no confidence only in races where candidates run unopposed.

Liam Dewey (19Ox) won the election for Oxford SGA president with 219 votes, according to an email from Oxford SGA Speaker of the Senate and Sophomore Senator Jacob Hicks (18Ox, 20C).

Palmer said it’s been exciting to see a lot of people engaged in student government but frustrating that there has been little attention to qualifications and goals.

“I wish that there were more focus and debate about what are these individual candidates going to do … as the leaders of SGA rather than focusing so much on the back and forth and goings on of campaigning,” Palmer said.