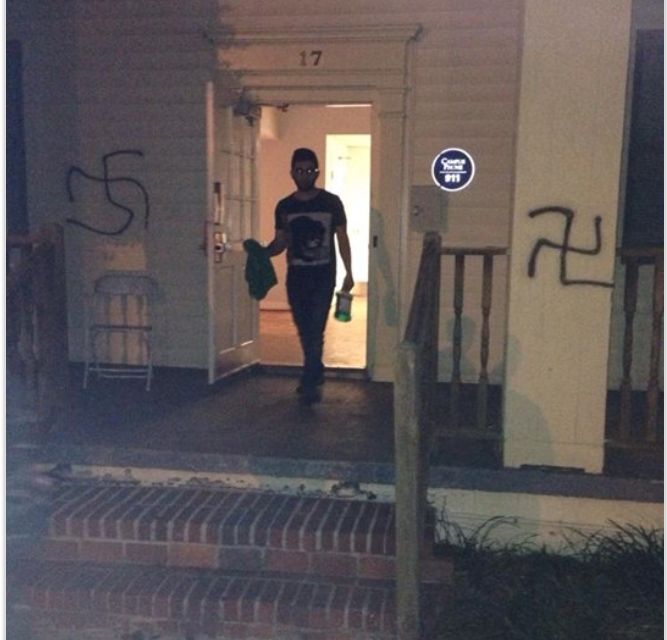 Like many at Emory, I identify as Jewish, but I would not label myself as religious. As a ‘non-practicing Jew,’ I feel the need to speak out on the recent anti-Semitism on Emory’s campus. Naturally, as with any act of anti-Semitism, my Jewish identity passionately erupts when hate attacks, but then I don’t worry about identifying as Jewish the remainder of the time. Am I allowed to speak out on behalf of the Jewish people when religiously I fail to identify as Jewish? Yes.

The foundation of my Jewish identity is my family history. As far back as my family can remember, we’ve been Jewish. Every grandparent, aunt and cousin is Jewish or converted to Judaism. I am Jewish by birth, which means you could say that I’m Jewish because I have to be, and that’s what has always bothered me about being Jewish. I think it would bother me regardless of my religion since birth. Why do I have to be Jewish? Let me choose.

But I have embraced my Jewishness. I have chosen to be Jewish, but not in a strict sense. My Jewish identity is founded in Jewish ethics, such as justice, love and compassion. I appreciate my Jewish heritage because even when I am avoiding synagogue, not believing in God or wondering if I should identify as Jewish, my Jewish identity reminds me that Judaism is not only a religion but that Judaism provides guidelines to being a good human being.

John Biguenet, the Robert Hunter Distinguished Professor at Loyola University, has a short story entitled “I Am Not a Jew.” Taking place in post-World War II Germany, the story follows a man who is not, and claims to not be, Jewish. When the man finds himself stuck in a cemetery with a gang of anti-Semitic boys, the man asserts his lack of a Jewish identity in order to avoid harm.

The story tracks the man’s developing guilt over not standing up to the boys, and at the story’s conclusion, the man’s wife struggles to understand her husband’s decision to convince the boys that he is not Jewish, as opposed to standing up to the gang. “You lied to those Nazis in the cemetery,” the wife says. “How was that a lie? I’m not a Jew,” the man replies. “Ich bin nicht Juden,” to which the wife asserts, “Wir sind alle Juden. We are all Jews. After Hitler. What choice do we have? We have to be Jews, all of us.”

Biguenet has no idealistic notions of converting the entire world to Judaism. The story’s central question is what do you do when you encounter injustice? Do you stand up to the anti-Semitism in the cemetery, or do you protect yourself from unnecessary harm? Do you choose to identify as a Jew when a swastika appears on your school’s frat house, or do you remind yourself that you’re not a religious Jew or a practicing Jew or even a Jew at all?

This is not a matter of submitting to Judaism or even to its ethics. This is a matter of identity. Are you fluid enough to become who you need to be when injustice strikes? I am not gay, but I support gay rights. I am not a woman, but I support feminism. I am not a Muslim, but I care about Islamophobia. Of course, I will never be gay or a woman or Muslim. I am a straight, white Jewish male, about as generic as they come at Emory, but identity does not need to be so rigid. That’s the true beauty of Biguenet’s story. He invites you, just for a moment, to assume the identity of a Jew, and that’s when the understanding kicks in.

You can care about things that reside outside of your inherent identity. You can stand up when others like you think it best to wait their turn. You are allowed to say no to anti-Semitism as a non-Jew, because just for a moment, the Alpha Epsilon Pi fraternity house became a symbolic representation of all our houses, and the swastikas were incised on all of us.

I think a lot of non-Jews feel uncomfortable entering into a passionate dialogue about anti-Semitism, and for good reason. As a white male, I’m timid to engage in discussions on black culture and feminism. It’s scary to enter discussions of discrimination when they fall outside of your inherent identity. But remember Biguenet’s story. It serves as a reminder that, with a bit of imagination, we can come to empathize with other identities and feel more comfortable talking about and resisting hate in any form. We are all partitions of what we love, which means we are our races, sexualities and religions, but we are also supporters of other races, sexualities and religions that we don’t identity with.

So, no, we are not all Jews, but it’s the non-Jews who are the most important voices at this time, because, of course, Jews stand against anti-Semitism directed towards them. But what about everyone else?​