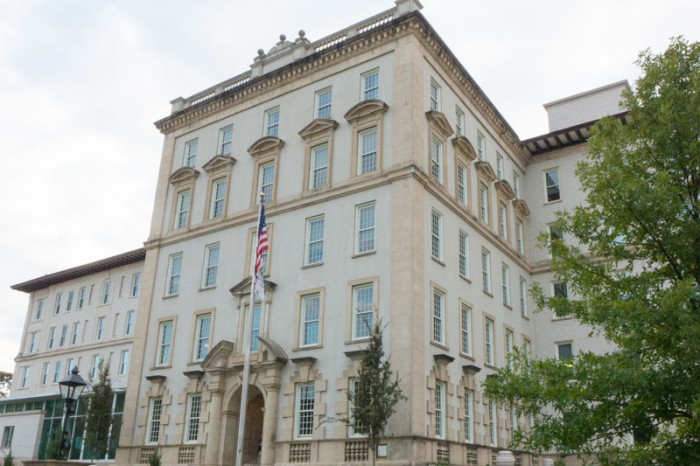 A panel of doctors and experts on the ongoing Ebola outbreak in West Africa discussed treatments, health care infrastructure and challenges to treatment to an audience in the Woodruff Health Sciences Center Administration Building (WHSCAB) Auditorium on Friday afternoon.

The event, entitled “Ebola at Emory: Patients to Populations,” was an installment of the Public Health Sciences Grand Rounds, a series of panels addressing the work and research of the Rollins School of Public Health and fostering collaboration across schools.

Dr. G. Marshall Lyon, associate professor in the Division of Infectious Diseases at Emory University School of Medicine and one of the attending physicians who treated Ebola-infected patients at Emory Hospital, was the guest speaker for the panel.

The panelists were James Curran, dean of the School of Public Health; Carlos Del Rio, Hubert professor and chair of the Hubert Department of Global Health at the School of Public Health; James Hughes, professor of medicine at the School of Medicine; Dr. Barbara Knust, epidemic intelligence service officer at the Centers for Disease Control and Prevention (CDC) and Dr. Rupa Narra, also an epidemic intelligence service officer at the CDC and a member of the response team that went to Guinea in West Africa.

Lyon updated the guests on the current outbreak. He said cases have been taken on from Nigeria, but further cases have not been discovered outside of the originally infected areas. However, he said the outbreak in Liberia, the hardest-hit country with more than 1,700 cases, has a chance of spreading to the Ivory Coast.

As of Sept. 4, the World Health Organization (WHO) has reported a range of mortality rates – from 39 percent to more than 50 percent – for each African country infected. Lyon’s speech illustrated some of the challenges both American and African facilities face in

Lyon showed pictures of patient care facilities in Liberia and noted that the facilities lack an adequate mechanism to dispose of the four to six liters of waste produced by each Ebola patient. Another problem facing these facilities is that there is not enough staff to deal with the waste and, unfortunately, dead bodies that accumulate in these facilities, Lyon said.

Then, Lyon showed an image of Emory’s special isolation unit. It has separate rooms for doctors and containment rooms for patients with bathrooms that are low pressure so that no air from inside the containment room escapes to the doctors’ room or the hallway.

Another challenge when it comes to the Ebola virus is that its earliest symptoms – fever, headache and nausea – resemble those of other illnesses like the flu or malaria.

“There is really nothing in the first few days which distinguishes this illness from something that is not nearly as worrisome from an infection control standpoint,” Lyon said.

Lyon also emphasized that dehydration and vomiting is a huge problem. Oral rehydration fluids are scarce in Africa, and even the patients in Emory’s facilities, who had access to oral

rehydration, vomited more fluid than they were administered, according to Lyon.

“I hope that we can get more IV fluids available in West Africa if we’re really going to make a dent in the fatality rate,” Lyon said.

According to Lyon, calcium, magnesium, potassium and sodium levels become compromised during the illness but can easily be remedied orally. However, for more serious symptoms like kidney failure or breathing issues, American facilities have life support, blood pressure maintenance and dialysis capabilities, while West African facilities do not.

“When it comes to treating Ebola, you don’t need to be a genius,” Lyon said, which drew laughs from the audience. “But you may need to be resourceful.”

Knust provided an update about the ongoing efforts of the CDC in West Africa itself. She said approximately 90 staff members have been deployed in the affected areas. Knust explained why transmission of the disease is so easy in that part of the world. First, the outbreak occurred around a three-country border which is commonly used by citizens, Knust explained. Also, many of these countries have been ravaged by civil war, which has engendered a distrust of the government and in turn led to violence within communities.

Knust lamented the loss of eight WHO members of an awareness-raising delegation who were killed by a panic mob in Guinea. The local villagers in Guinea thought the WHO workers were there to spread the disease rather than help it.

“We need to continue to think about the safety not just from the virus itself but safety from a community that is struggling to understand the virus,” Knust said.

According to Knust, the burial customs of infected areas have also contributed to the spread of the virus because many people prepare dead bodies themselves. Knust, like Lyon, emphasized the lack of basic health care facilities in Africa.

“An individual patient room with a private bathroom is something that just largely does not exist, and it’s probably one of the easiest things that would prevent the transmission of Ebola in a health care setting,” she said.

Knust was also one of the health care professionals who met with President Barack Obama last week. She said they discussed the drawbacks of personal protection equipment (PPE), which is bulky and hot and only allows workers to treat patients for about an hour at a time.

The CDC, along with the WHO, the Federal Emergency Management Agency (FEMA) and other responding agencies have been coordinating throughout the outbreak, according to Knust.

Some of the more recent efforts to deal with the crisis have been improving contact tracing and case finding strategies, instituting exit screening procedures for airplanes with temperature checks and expanding on infection control training, Knust said. Starting in a couple weeks, a FEMA pilot training facility in Alabama will be training 45 health care workers per week in infection control.

Narra, who worked in a remote village in Guinea with the CDC, elaborated on the day-to-day activities of being in the field in West Africa. This entailed data management, contact tracing and enforcing infection control measures.

Narra also addressed the resistance of local citizens to white involvement in the crisis.

“People don’t realize what this resistance from these communities means,” Narra said. “[It] causes these patients to come in very late in their course, which in turn causes them to have a much worse outcome.”

Del Rio spoke about the growing disparity between the “haves” and the “have-nots” and the importance of a global response. He said this epidemic is about health care equipment, staff and systems.

“Hopefully, this Ebola epidemic is going to be a wakeup call to the global health care community that we need to strengthen health care systems,” Del Rio said.

Hughes expanded on how this Ebola outbreak is different than ones from previous years.

He said a big difference is that intense transmission has occurred in urban settings, whereas earlier outbreaks have been in rural settings.

Lyon ended the discussion with a note on the importance of learning the clinical history of a patient.

“You can’t underestimate what a good history is worth,” he said. He added that laboratory tests are key.

At the end of the event, the panelists agreed that research is instrumental in tackling this epidemic.

After the event, Lyon said he was not able to disclose information about the third Ebola patient at Emory. However, he did say that efforts to get experimental drugs to Africa are already underway with companies working with the WHO and the federal government to streamline the approval process for new drugs.

Georgia Senators Saxby Chambliss and Johnny Isakson attended the event along with students and faculty from many of the schools within the University.

College senior Andrew Navia said he was at the event because he had worked with Lyon previously.

“This is such a cool topic with Emory being so prominent in this Ebola outbreak and being ambitious with trying to treat people,” Navia said. “I thought it was a good response, and I wanted to hear about it.”