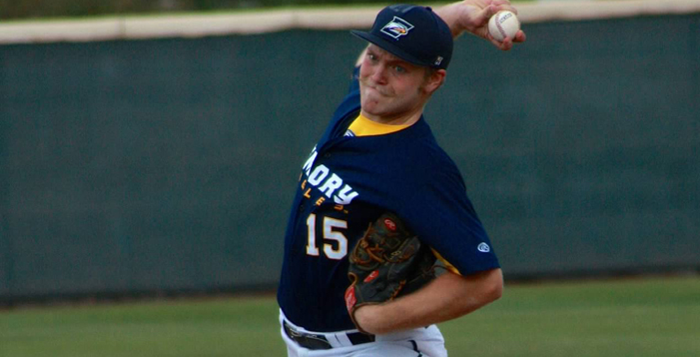 The baseball team extended their winning-streak to six games Wednesday, shutting Berry College out 5-0. The loss was the first time Berry was shut out this season. More importantly, it was a hard fought game and a gratifying victory for the Eagles.

The game picked up very quickly after freshman pitcher Hans Hansen retired the side in the top of the first inning. The Eagles came out swinging in the bottom of the first, scoring three quick runs.

Senior Jared Kahn led the charge with a lead off double. Kahn scored on a bunt single by senior Brandon Hannon, accompanied by a throwing error.

Senior Daniel Iturrey then hit a gorgeous ball up the middle to send in Hannon. After stealing second base and advancing to third on Berry’s second error, Iturrey scored on a groundout RBI from junior Wes Peacock.

After the first inning explosion, the Eagles settled in and played great baseball. Hansen led the squad with three strikeouts and zero runs allowed through seven innings. Senior Robert Gross and freshman Kyle Monk finished the job out of the bullpen, allowing one total hit total over two innings pitched.

“Hansen pitched a spectacular game,” Hannon said. “He carried us to victory.”

The freshman pitcher has been lights-out as of late. Hansen improved to a team-best 7-1 on the campaign with a 2.59 ERA and is now 4-0 with a miniscule 0.90 ERA over his last four starts.

While Hansen was dominating Berry’s batters on the defensive end, Junior Jordan Selbach was dominating on the offensive end. Selbach batted three-for-four in the contest, raising his average to an impressive .342.

Although the Eagles won in a shutout, the game was closer than the numbers indicated. Berry deserves credit for keeping up with the Eagles in hits. The Vikings had eight hits on the day. However, the Eagles did a great job preventing the opposition from scoring with flawless defense.

“We got up early and played great team ball to come out on top,” Peacock said. “The pitching was phenomenal today and we supplemented it with great defense.”

This win will surely improve the Eagles’ impressive resume for selection to the NCAA Championships, with the win raising their record to 25-9 on the season. The Eagles, in first place in the UAA Conference, will return to action this weekend, playing a home-and-home series against Georgia Gwinnett College, a NAIA institution.

Emory will travel to face the Grizzlies on Friday at 7 p.m. before returning home to Chappell Park on Saturday for ‘Senior Day,’ with the first pitch scheduled for 2 p.m.