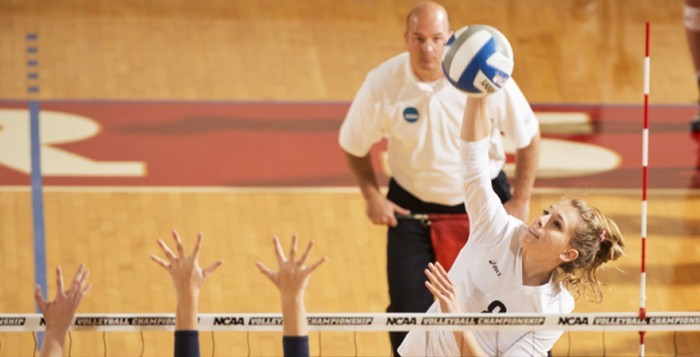 Senior Leah Jacobs goes for a kill during the NCAA Regional Championships. The team won all three games, advancing them to the Final Four. The are set to compete against Williams College (Mass.) on Friday. Courtesy of Emory Athletics.

This past weekend, the fifth-ranked women’s volleyball team came out victorious in the NCAA Elite Eight of the NCAA Division III Tournament. After an eventful weekend, the squad will advance to the NCAA Final Four.

Friday started off with the first round of the tournament against Webster College (Mo.).

The second match, the next day, put Emory against Thomas More College (Ky.).

The offense was fronted by senior outside hitter Leah Jacobs’ 12 kills and Holler’s 11. Miles once again led in assists with 33, while Bowman was again the defensive leader with 21 digs.

Emory was then in the position to play the next day for the St. Louis Regional title. Playing three days in a row didn’t affect the team, however.

“Luckily for our team, everyone on the court has been through a Regional Championship and to the Final Four, so we know what it’s like to play three days back-to-back and how the schedule of regionals goes,” sophomore right side hitter Sarah Maher said. “That experience might even have been one of our advantages this weekend: the sense of confidence in knowing that we’ve done this before.”

Jacobs, McGrath and Maher each earned an honored spot on the St. Louis Regional All-Tournament Team, and Maher returned home with the tournament’s Most Valuable Player award.

“We are prepared going into the rest of NCAAs,” Miles said. “Our goal is to win a National Championship, and the way we can do that is to go into each match with the confidence that we’ve worked all year for this, and to just continue to improve our overall game in each set we play.”

The quarterfinals will take place this Friday, Nov. 21, in Newport News, Va. against 28-4 Williams College (Mass.).