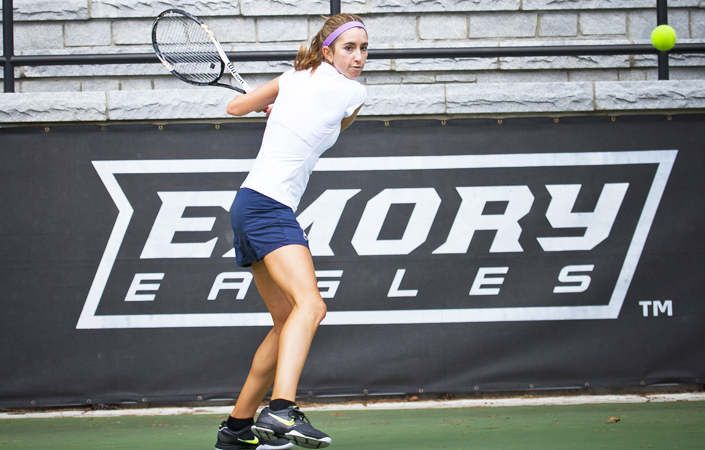 Junior Beatrice Rosen prepares to return the ball. She finished second in both the open doubles tournament, paired with sophomore Michelle DeMeo, and the open singles tournament of the USTA/ITA South Regional Championships last weekend. | Courtesy of Emory Athletics

The Emory women’s tennis team opened its 2014 fall campaign and hosted the USTA/ITA South Regional Championships this past weekend, claiming both first and second place in both singles and doubles play for the 13th time.

Tournament play opened with a number of remarkable wins for Emory on Friday. Sophomore Michelle Satterfield and junior Beatrice Rosen dominated second round individual matches (6-0, 6-1 and 6-0, 6,0 respectively) after coming into the tournament with firstround byes.

The Eagles’ singles team showed up to the tournament with confidence and registered a record of 15-1.

“Our freshmen also showed that they have a lot of potential,” Bryant said.

“At this point of the season, I really want the players to work on getting better and this tournament is a great opportunity to implement what we have been working on in practice during competitive match play,” Bryant said.

On Saturday, the four players representing Emory (Fowler, Harding, Su and Rosen) were able to secure advances to the semifinals.

Fowler demonstrated a great performance, defeating Sewanee: The University of the South (Tenn.) junior Bronte Goodhue 6-3, 6-3. Su gave up only one game in her match against North Carolina Wesleyan College sophomore Natalia Lopez, quickly finishing the match 6-1, 6-0. Rosen was able to defeat fellow Eagle Fuhr, 6-4, 6-3 to advance while Harding defeated Deena Li Kam Wa of Millsaps College (Miss.) with a score of 6-2, 6-3.

“Our entire team competed hard and supported one another the entire weekend,” Bryant said.

Rosen took the title as the USTA/ ITA Regional Singles Champion after defeating her teammate Harding in two sets and later Su after a three set battle ending with the score of 6-2, 3-6, 6-3.

However, Su redeemed herself along with her doubles teammate Anna Fuhr to defeat fellow Emory doubles team Rosen and Michelle DeMeo.

“I had to play my teammates the last two rounds,” Su said. “It’s always tough playing teammates, but at the end of the day I think that is what makes us better and stronger as a team.”

Rosen, along with doubles team of Su and Fuhr, advance to the USTA/ITA Small College National Championships, which will take place in Palmetto, S.C. on Oct. 9 through 12.