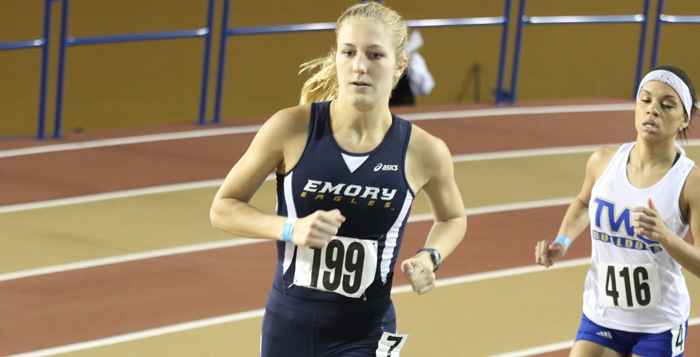 This past Friday and Saturday, the men’s and women’s track and field teams competed in the VertKlasse Meet hosted by High Point University in North Carolina.

Scoring performances were accomplished by the women’s team, as junior Electra Korn recorded a time of 56.51 seconds in her 400-meter dash, achieving the fastest time this season in Division III.

Not only that, but this mark ranks as the fourth-fastest time in school history as well as her best personal record.

With the second-fastest time in Division III, and fifth-fastest time for an Eagle in the meet, junior Stephanie Crane recorded a time of 2:14.45 in the 800-meter run, which placed her in eighth.

Junior Debora Adjibaba achieved the third-fastest mark in Division III, as well as the fourth-fastest time in school history with her 100-meter dash, recording a time of 12.15 seconds.

This placed her as part of three top-10 national times this weekend. Additionally, Adjibaba got 13th place in the 200-meter dash, with a time of 25.18 seconds. This was the eighth-fastest time in the nation this year.

Combined, Korn, Crane and Adjibaba recorded a total of five top-10 times in Divison III during this season.

Top performers for the Emory men included sophomore Jacob Seigel in the discus throw, with a toss of 44.10 meters, which placed as second-best among the University Athletic Association (UAA) competitors this season and placed sixth in the individual meet.

Junior Gui Silva achieved a fourth place finish in the 400-meter dash, with a time of 48.92 seconds. Sophomore Young Jin Kim, finished sixth in the pole vault event, at a height of 4.17 meters.

Having these finishes in mind, the Eagles have continued successfully achieving scoring performances, which has placed them ahead during this outdoor season.