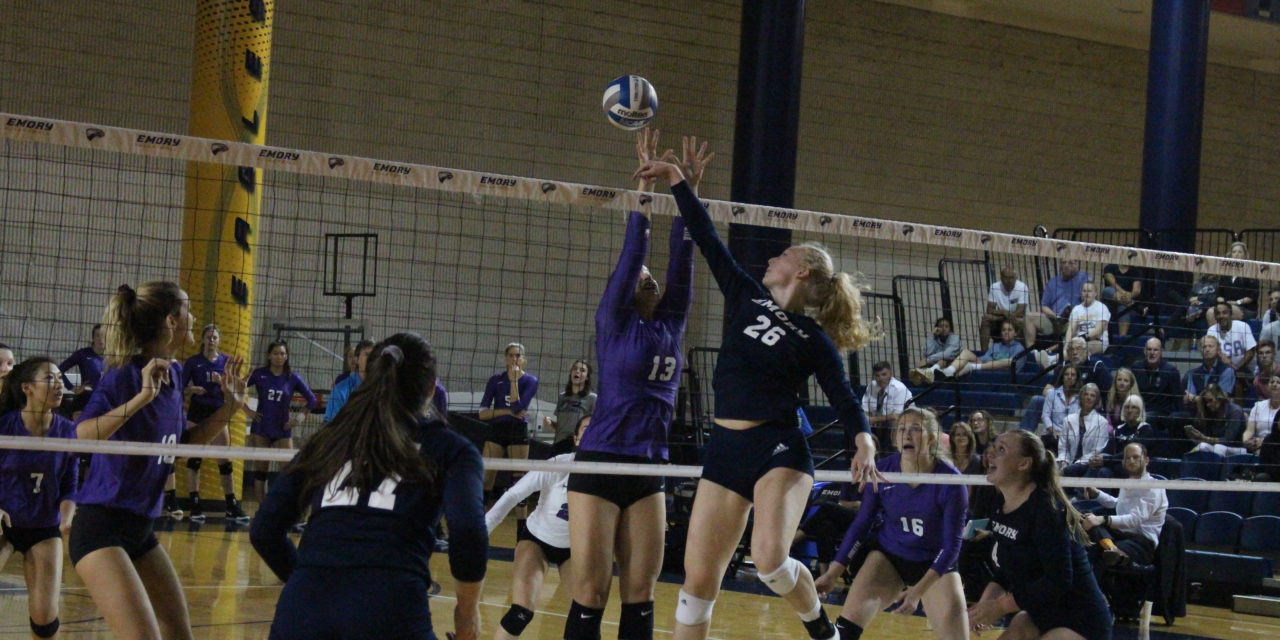 The Emory volleyball team extended its winning streak to nine games with home victories against Lee University (Tenn.) on Oct. 2 and Washington University in St. Louis (WashU) (Mo.) and New York University (NYU) on Oct. 6. The Eagles now boast a perfect 5-0 in University Athletic Association (UAA) play, tied with the University of Chicago for first place, and are firmly in the hunt to repeat as conference champions.

Head Coach Jenny McDowell is pleased the team defended home court and believes the crowds of over 200 at each UAA game aided the performance.

“It was fun to play in front of such a great crowd,” McDowell said. “We really appreciated the awesome support and it really made a difference.”

Emory began the week with a convincing non-conference victory over Lee. Fantastic hitting efficiency, commonplace for the Eagles this season, was once again on display as Emory only committed six errors en route to 36 kills. The Eagles were equally as strong defensively, as four different players recorded at least five digs. Senior libero Elyse Thompson lead the way with 10 digs, and junior middle hitter Finn Wilkins was a force at the net with five blocks.

“We had to have a mindset shift in the beginning of the season that no one was going to outdig us,” Thompson said. “Defense requires an aggressive mindset to keep the ball off the ground no matter what.”

Against the WashU Bears, Emory looked very comfortable early on. After winning the first two sets 25-12 and 25-18, the Eagles looked well on their way to their eighth straight set win. But the Bears fought hard to stay in the game and forced a fourth set with an unexpectedly dominant 25-12 win in the third set. Emory didn’t do themselves any favors with an uncharacteristically high nine attack errors and five service errors.

McDowell was more impressed by WashU’s response in the third set than disheartened by the Eagles’ play.

“It was a matter of the other team playing their very best,” McDowell said. “Every team is going to give us their best shot.”

The Eagles regained their composure in the fourth set and dispatched the Bears by a score of 25-21. Junior right-side hitter Leah Saunders, the UAA player of the week, was the star of the match with an outstanding two-way performance that resulted in 21 kills, nine digs and two blocks. Thompson once again shined on  defense with a game-high 19 digs, while freshman setter Cassie Srb, currently second in the UAA in assists per set, produced a staggering 50 assists.

The next game against NYU followed a similar pattern. After convincing wins for Emory in the first two sets, 25-10 and 25-19, unusually sloppy play allowed NYU to take the third set 25-16. The Eagles once more responded well, securing 25-17 victory in the fourth set. The Emory defense did an excellent job limiting NYU’s freshman outside hitter Haley Holz, the UAA leader in kills per set, to a .179 hitting percentage. Junior middle hitter Maggie Rimmel had her best hitting game of the season, leading the offense with 14 kills. 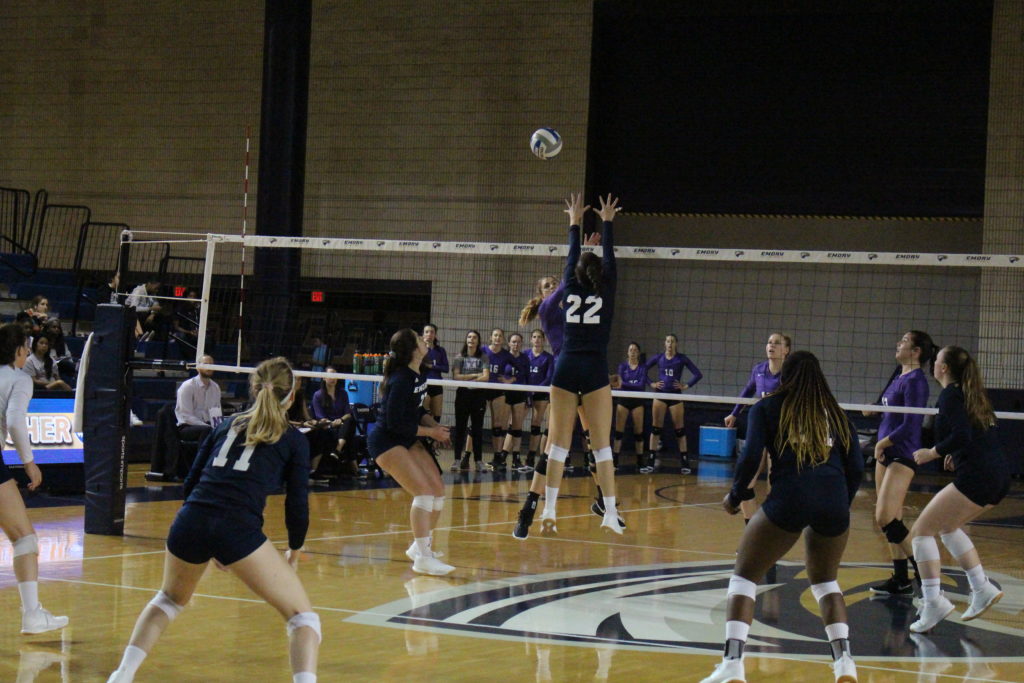 McDowell was thrilled by the Eagles’ response to losing sets in both the NYU and WashU matches.

“I was impressed with how our team responded after losing those sets,” McDowell said. “We came up big during the biggest moments of both matches.”

Thompson’s defensive efforts over the three matches earned her the title of the program’s all-time digs leader with 1,519 digs.

“I am super honored to have made it to the highest digs total,” Thompson said. “I am so fortunate to have been on incredibly successful teams, … and I owe it to all my teammates for making me better every single day.”

Up next, the Eagles will take a break from conference play with three straight games against non-conference opponents, the first of which will be played at home against Birmingham-Southern College (Ala.) on Oct. 10.

Even though these non-conference games don’t hold the same weight of UAA games, Thompson is sure the team will attack them with the same energy.

“These next matches are crucial for regional rankings which play into NCAA tournament hosting,” Thompson said. “It is not hard at all to be fired up [for the games].”