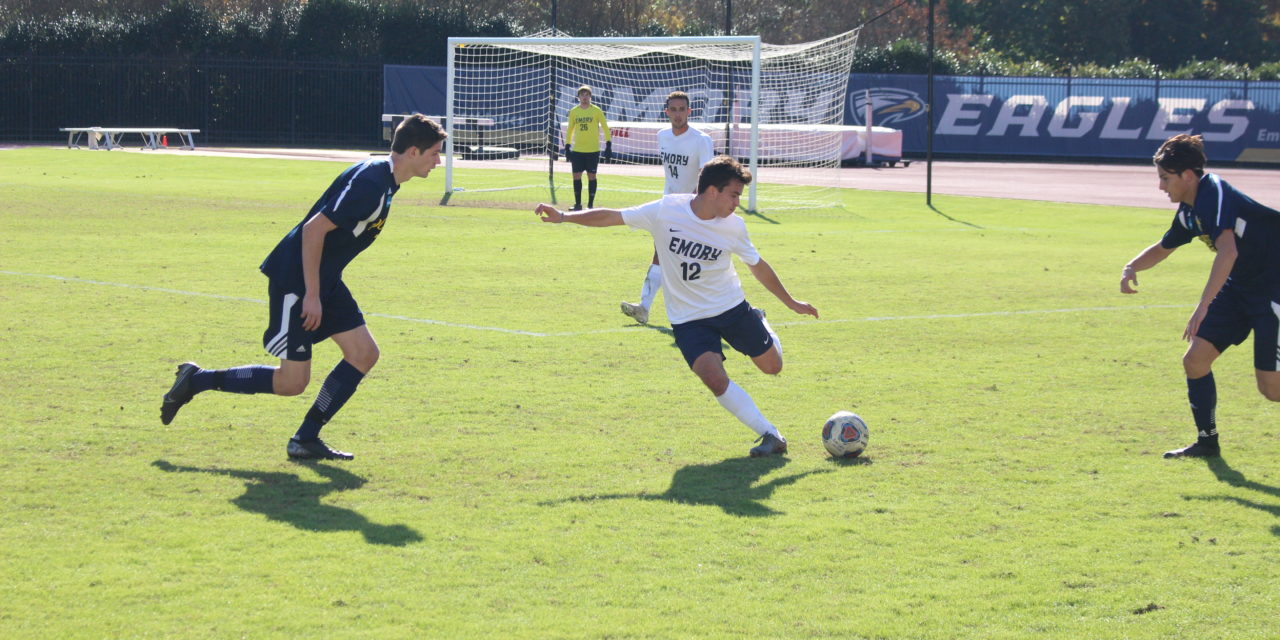 In their final game of the regular season, the Emory men’s soccer team competed against the University of Rochester (N.Y.) Yellow Jackets on Nov. 9, finishing in a 1-1 tie after double overtime.

The game was so aggressive that senior goalkeeper Trevor Stormes had to be subbed out after colliding with Yellow Jacket senior midfielder Josh Cooley when both players went after a loose ball. Stormes left the game with injuries, and sophomore goalkeeper and University Athletic Association Soccer Co-Defensive Athlete of the Week Max Carlson came in and played the rest of the match.

But, in the 17th minute, freshman midfielder Alejandro Gomez juked out a Yellow Jacket defender, and gave himself the space to cross a high ball into the box. Senior midfielder Jun Tsuru got on the end of the cross and headed the ball into the goal, putting the Eagles up 1-0.

Given that the game was played on Senior Day, Tsuru was more excited about scoring.

“When I scored, I just wanted to celebrate and make the most of that,” Tsuru said. “I didn’t know if that was going to be my last goal.”

The rest of the first half remained scoreless, but there was still plenty of action on the field. With under 10 seconds left in the half, freshman forward Madison Conduah broke away in what looked like was going to be the Eagles’ second goal. Conduah found freshman forward Zach Kornblum open in the box, but the shot was saved by Rochester’s junior goalkeeper Hugh Curran.

Going into the second half, the Eagles and Yellow Jackets were tied with five-shot attempts apiece. But, the Yellow Jackets came into the half with heat. In the 60th minute, Rochester senior midfielder Owen Carroll received a yellow card for aggressive play.

The penalty, ironically, only charged the Yellow Jackets’ momentum more. Just two minutes later, Rochester’s Cooley shot off a deflection and into the far post, tying the game 1-1.

With 10 minutes left in regulation, the Yellow Jackets had the Eagles’ defense on its heels. Carlson jumped to save a shot from Rochester but missed. Luckily for the Eagles, senior midfielder William Jones was behind Carlson to prevent the goal.

After going after a loose ball against a Rochester offender, however, Jones accrued a foul for aggressive play, giving the Yellow Jackets a free kick.

Near the end of the second half, Tsuru found himself on a breakaway. He crossed the ball into the box, but was not able to find an Eagle to score a goal. The regulation period ended in a 1-1 tie.

Going into overtime, the Eagles knew they needed a goal. But, having already played such a long game, the Eagles were struggling to stay focused, according to Tsuru.

“It’s a long game,” Tsuru said. “A lot of things can happen in that period of time. There were spurts where we lost concentration, and I think that was our Achilles’ heel.”

Both teams came flying out of the gate at the start of the first overtime period. Within the first minute, Yellow Jackets’ sophomore defender Will Eisold received a yellow card, which gave the Eagles a direct free kick opportunity.

Junior forward Nate Sampson took the kick. With a three-man wall in front of him, the odds of scoring seemed slim. But Sampson guided the ball around the wall into what was primed to be an Eagles’ goal. Despite passing the defenders, the ball hit the right goal post, and the Eagles could not get their foot on the rebound. The first overtime period came to a close, and the teams were still tied 1-1. 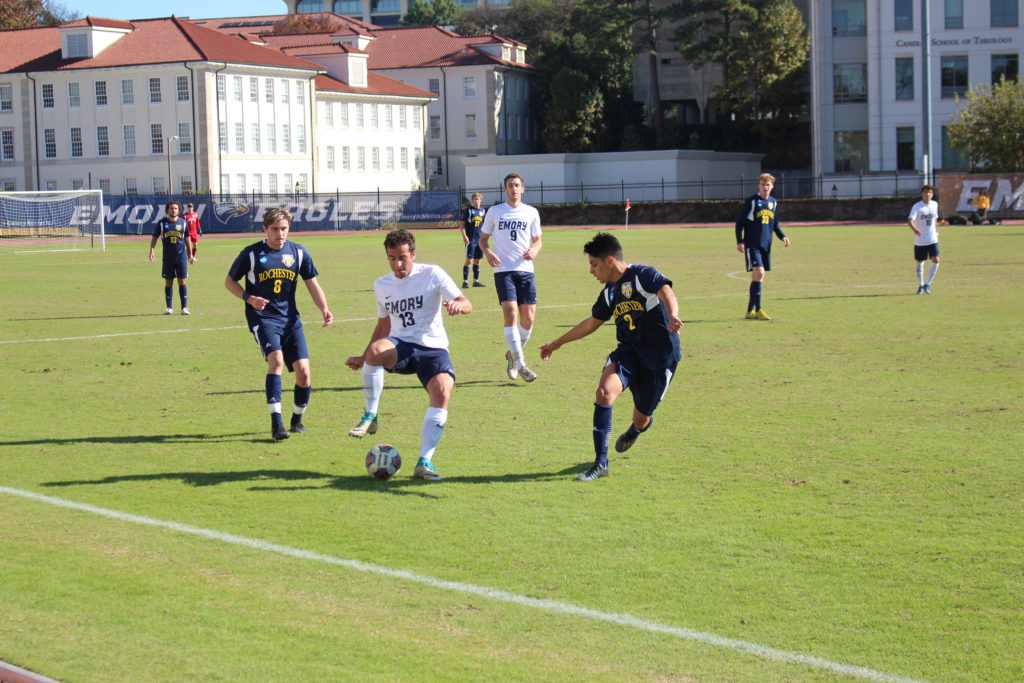 Similar to the first overtime period, the second overtime period was full of powerful offensive attempts. Three minutes in, Rochester freshman forward Tony Hypsher passed several Eagle defenders and headed straight for Carlson. Confronted one-on-one, Carlson came out to the edge of the box, kicking the ball away to stop Hypsher.

As the clock wound down to the last 10 seconds, the Eagles approached Curran. Yellow Jacket defenders started to swarm senior forward Keegan McCombie, who made an unsettled and guarded shot. Curran caught the shot and held onto the ball until the overtime period came to a close.

The Eagles were not selected for the NCAA playoff bracket on Nov. 11, ending their season with a 9-5-4 record.