The No. 7 Emory volleyball team went 2-1 this weekend at the University Athletic Association (UAA) Round Robin I at Brandeis University (Mass.), setting the Eagles’ overall season record at 10-4.

In their opening match against Rochester, junior outside hitter Morgan McKnight, senior middle hitter Sydney Leimbach and senior outside hitter Karissa Dzurik bolstered the Eagles’ offensive campaign. McKnight completed eight kills in 12 total attempts with just one error, finishing the match with a .583 total hitting percentage. Leimbach pounded out nine kills in 12 swings, finishing with an attacking effort of .750, while Dzurik earned her seventh double-digit effort of the season with 10 total kills.

“[Dzurik and McKnight] are an amazing one-two combination as outside hitters,” McDowell said. “Leimbach is back and better than ever after an injury she sustained last year. She has taken her game to a whole new level with her commitment to rehab and hard work.”

“Our team really capitalized on the energy in the gym and dominated the tempo of the match,” Thompson said of the victory.

In the match against NYU, Leimbach and Dzurik continued their offensive streak, finishing the match with .412 and .333 total hitting percentages, respectively. On the defensive side, senior setter Mady Arles finished the match with seven digs, while Thompson finished with 13. After claiming the first two sets, the Eagles faced an 18-20 deficit but rallied for seven straight unanswered points to earn the victory.

“Our team successfully countered [NYU’s] 6-2 offense that was pin [hitter] heavy,” Thompson said of the match. “Our tempo and pace of play ultimately beat NYU.”

The following day Eagles’ defeat against CMU dragged their total losses of the season down to four. CMU dominated the Eagles on both  offensive and defensive fronts, out-hitting the Eagles .245 to .199 and finished with a 64-49 edge on digs. Although the Eagles held a 9-3 block advantage with Leimbach contributing four digs, it wasn’t enough to eke out a win.

The Eagles return to action on Oct. 3 at Lee University (Tenn.).

Editor’s Note: Dzurik is a staff writer for the Wheel. She was not involved in the composition of this article. 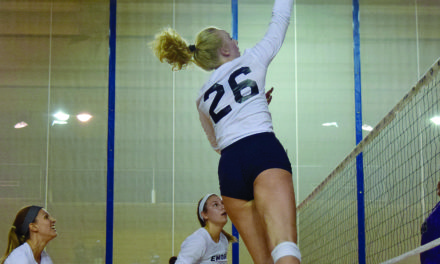 Volleyball Braces for Rough Road Ahead 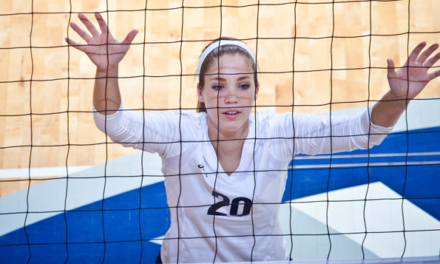