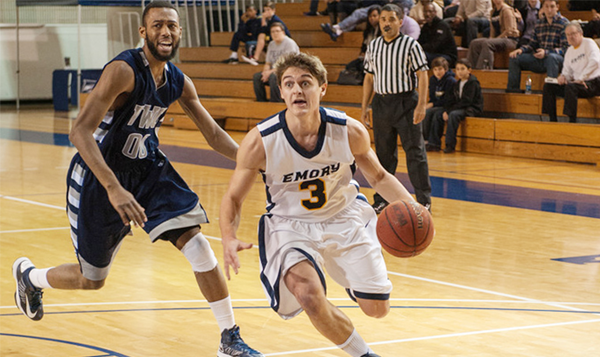 The men’s basketball team travelled to the University of Rochester (N.Y.) for the regular season finale on Saturday afternoon, hoping to finish the season on a high note against a University Athletic Association (UAA) foe. The Yellowjackets had other plans, taking down the Eagles 97-83. After the loss, Emory’s record fell to 17-8 overall with a UAA record of 9-5, while Rochester improved to 10-15 overall and 4-10 in the league.

In the first half, Rochester made 12 of their first 13 shots, jumping out to an early 31-17 lead. The Yellowjackets would protect their lead the remainder of the period, fending off various Emory runs and went into halftime with a 55-43 lead.

Emory came out of halftime more committed to the defensive end and quickly cut Rochester’s lead to seven with a 7-2 scoring run. After Rochester extended their lead back up to 10 points, Emory responded again, going on an 8-3 run to make the score 68-63. Unfortunately for the Eagles, the closest they ever got was within five points, as the Yellowjackets went on two runs to extend their lead to 89-73 with five minutes to go in the game.

Leading Emory in scoring for the day were seniors McPherson Moore and Jake Davis, who finished with 22 and 18 points, respectively. It was Moore’s fifth straight game of 20 or more points, and Davis’s 24th game of double-digit scoring for the season. Also scoring in double figures were juniors Alex Foster and Michael Florin, who each scored 13 points, and sophomore Will Trawick, who had 11 points.

From the first whistle the Yellowjackets shot the lights out, converting almost 63 percent of their shots from the field, an opponent season-high for the Eagles. Seemingly every Rochester three-pointer hit nothing but net, as they shot a sizzling 71.4 percent (10 of 14) from downtown. In contrast to the hot-shooting Yellowjackets, the Eagles were unable to keep up, shooting 39.4 percent from the field and only 24 percent (six of 25) from three. Emory outscored Rochester in second chance points 14-2 and in fast break points 15-2, but Rochester’s bench outscored Emory’s 22-6.

Head Coach Jason Zimmerman was less than pleased by his team’s performance on defense.

“It wasn’t our best outing defensively,” Zimmerman said. “We competed and we got back into the game, but we just couldn’t get over the hump.”

He continued: “You can’t let a team make 12 of their first 13 shots. Then we’re on our heels fighting an uphill battle.”

The Eagles’ season is far from over. On Monday, Emory was selected to compete in the NCAA Division III Tournament for the second straight season.

Emory received a first-round bye and will play the winner of Centre College and LaGrange College on Saturday at 7 p.m. at home in the Woodruff P.E. Center. The Eagles played LaGrange earlier in the season, winning 106-84 on Dec. 1.

According to Moore, a tourney berth had been the Eagles’ goal since the start of the season.

“It has been a good year so far, but making the tournament was our goal from the beginning,” he said.

Zimmerman, too, is satisfied with the Eagles’ regular season.

“We finished second in a great league,” Zimmerman said. “Obviously, our goal was to win the league, but this is the fifth year in a row we were third or above. Winning nine games in our league is very difficult, so we are very proud of our guys.”