The Emory women’s basketball failed to capitalize on leads in two games on the road this weekend and suffered the fate of defeat against the Brandeis University (Mass.) Judges and the New York University Violets. After the two losses, the Eagles are 13-7 overall and 4-5 in conference play.

Initiating their weekend play against Brandeis, Friday, Feb. 3, the Eagles were determined to replicate last week’s win against the Judges. Emory failed to establish a lead in the first quarter and fell behind early. Despite sophomore center Ashley Oldshue’s six points in the quarter, the Eagles trailed 17-13.

Recapping the first half, Head Coach Christy Thomaskutty noted that the game was played hard and foul trouble hurt the team.

“It was definitely a physical game,” Thomaskutty said. “I thought we started really slow and then got back in it. We were in foul trouble and had three starters on the bench with fouls in the first half.”

Down 30-27 to start the second half, Emory turned the game around in the third quarter, grabbing the lead. Emory’s offense started to click as the Eagles outscored Brandeis 20-13. A tandem of freshmen, Chernow and forward Erin Lindahl, put up five points apiece. The Eagles also out-rebounded the Judges 12-5 in the third.

With a lead heading into the fourth quarter, Brandeis quickly snatched it out of the Eagles’ talons, going on a 9-0 run to reclaim the lead. The two teams handed the lead back and forth until the final possession, when the game was tied at 59. Brandeis took advantage of its final possession and converted on a last-second lay-up to win the game.

Senior guard Shellie Kaniut attributed the blown lead to lack of execution and losing the battle on the boards.

“Brandeis was able to take a lead because of our rebounding and we did not capitalize on turnovers,” Kaniut said. “We let them get too many second-chance points.”

“We did not play consistently and well,” Thomaskutty said. “I thought Friday night’s game we were beaten on the glass. We have to finish plays and box out to get the rebound.”

After the devastating loss against Brandeis, the Eagles anticipated a victory for the second consecutive week against NYU. Emory jumped out to an early lead, outscoring NYU 23-20 in the first quarter. The Eagles’ lead was as high as eight points in the quarter, but to the squad’s dismay NYU cut it down to only three points by the time the quarter ended.

NYU completely had their way with Emory in the second quarter, outscoring the Eagles 22-10. The Eagles’ lead quickly vanished and the Violets rose to 42-33 at the half. Emory’s offense and defense both struggled in the quarter and created a deficit.

The third quarter yielded even poorer results for Emory. NYU scored at will and continued to amass a commanding 16-point lead for Emory to overcome in the fourth quarter.

Emory charged back in the final quarter, pulling within two points of NYU. Kaniut suggested that the team’s stronger defense brought them closer to their opponents in the fourth.

“We finally started to play some defense,” Kaniut said. “I think we eventually started digging in and paying attention to personnel and figuring out who was hot.”

Down only two points with less than one minute to go, Emory ran out of gas. NYU shut Emory out in the final minute and held on for a 67-61 win.

Thomaskutty thought the team’s defense led to their loss.

“The defense really let us down,” Thomaskutty said. “We just didn’t play personnel correctly and we let their best shooter be wide-open at times. I feel like we didn’t dig in on the defensive end.”

Kaniut and Oldshue were Emory’s two most reliable players in the game. Together they scored 46 of Emory’s 61 points. Kaniut had a massive offensive performance of 27 points, including three baskets from beyond the arc.

Emory will play their next game on the road against Washington University in St. Louis (Mo.) Friday, Feb. 10. 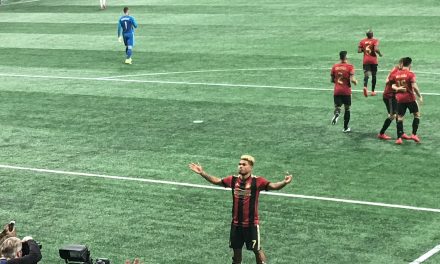