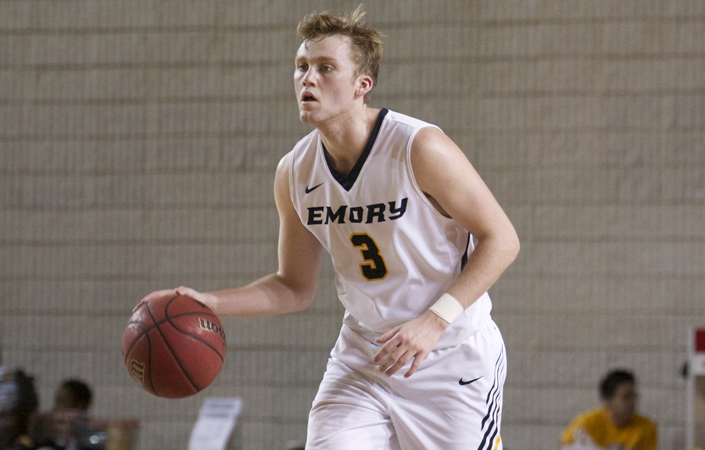 Hoping to save face after an embarrassing premier in University Athletic Association (UAA) play last weekend at Rochester University, the Emory men’s basketball team came up short in a disappointing home loss to the Washington University in St. Louis (Mo.) Bears Friday, falling 71-63. However, the Eagles bounced back in a huge way on Sunday, holding off the visiting University of Chicago (Il.) Maroons 80-72 for their first win in UAA play. The Eagles finish the weekend now 10-4 on the year and 1-2 in the UAA.

Bolstered by a packed home crowd draped in white for Friday’s whiteout theme, the energy was high for both sides at the tip off. Emory and Wash U exchanged blows early on, but Wash U’s  slight lead grew as the half progressed.

“The crowd was great,” Head Coach Jason Zimmerman said. “We wish we could have given [the crowd] something more to cheer for and get excited about, but we didn’t do a very good job of that [Friday night].”

Too often, the Eagles settled for tough looks offensively, while allowing the Bears to attack the rim for easier scoring opportunities. The Bears’ determination to push the ball into the paint paid significant dividends, as Wash U finished the game with a 10 point advantage in the paint.

“We knew they had good bigs, [but] we have good bigs,” Zimmerman said. “We’ve got to be better. They did a good job of making us work for shots and we didn’t do a very good job of meeting that challenge.”

The Eagles would push back, bringing Wash U’s lead down to four prior to a Bears’ three that pushed their lead back out to seven at halftime, squelching the Eagles’ momentum.

In need of a strong response to start the second half, the Eagles came out flat. Emory missed some easy looks and allowed the Bears to once again obtain a comfortable double-digit lead.

“I felt like we had a bit of a hangover from last week [against Rochester], which shouldn’t happen,” Zimmerman said. “The confidence and the feel [of a team] is very fragile, but you’ve got to be able to put that behind you and move on.”

There were flashes of life from the Emory offense down the stretch, but they could never quite pick up enough defensive stops to cut deeply into the Bears’ lead. Wash U junior guard Jake Knupp was a splinter in Emory’s side through much of the game, scoring 15 points, many in critical moments to deflate Emory’s hopes of a comeback.

A final surge by the Eagles showed promise, as they were able to cut the lead six after a run of seven consecutive missed free throws from the Bears. In the end it would be too little, too late, as Wash U escaped with the 71-63 road victory.

On Sunday, the Eagles took the court with a swagger lacking from Friday’s game.

In an early play that would typify the afternoon, senior forward Jim Gordon received the ball with a possible look at three, but pump-faked and drove the ball to the hole for an easy lay-in. Determined to feed the ball into the post and drive to the lane, Emory refused to settle for the tough perimeter jumpers that plagued Friday’s game.

“We knew that after dropping those first two games in the conference we had to have a big one [Sunday],” junior forward Christopher Avant said. “We got back to the basics and played hard nosed defense and really tried to run them in transition. We knew we had to play well and we came out with a lot of energy.”

Leading 38-27 at half, Emory kept Chicago at arm’s length, securing the 82-70 victory. Junior forward Adam Gigax had a team-high 24 points with nine rebounds and junior forward Christopher Avant came through with perhaps his best performance yet, dropping in 19 points on 80 percent shooting.

Off the bench, sophomore guard Beau Bommarito provided big minutes. He did not light up the stat sheet but did a lot of intangibles for the Eagles during his time on the floor.

The win over Chicago keeps the Eagles in the thick of the UAA race and gives them a boost before they travel northward this next weekend, playing at Case Western Reserve University (Ohio) Friday, before a matchup against Carnegie Mellon University (Penn.) Sunday.