Eagles Defeat LaGrange 10-5 at Away Game 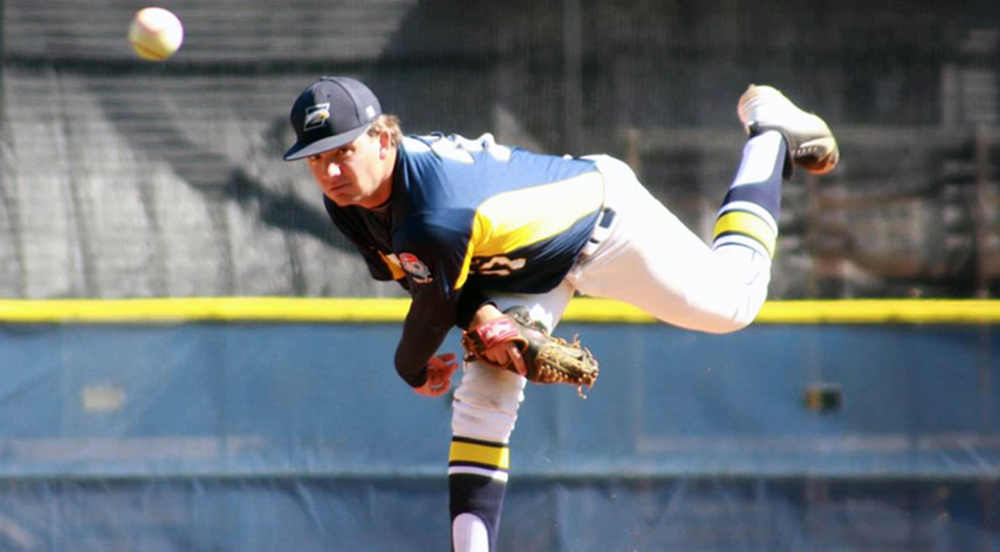 Sophomore Jackson Weeg hurls the ball from the mound. Weeg was named this week’s University Athletic Association (UAA) Pitcher of the Week. This marks his second UAA Pitcher of the Week honor this season, and the third of his career. | Courtesy of Emory Athletics

On Tuesday, the Emory baseball team landed a 10-5 road victory against the LaGrange College (Ga.) Panthers.

The Eagles got on the board right away, scoring three runs in the first inning. Senior outfielder Wes Peacock homered, then junior infielder Dylan Eisner and sophomore infielder Philip Maldari each had one hit and scored.

After scoring one run in the second and another in the third, the Eagles held a 5-0 lead before the Panthers got on the board. LaGrange scored two runs in the fourth, off Emory sophomore lefthander Jackson Weeg. The Panthers got two runs off Weeg in the seventh as well, before he was replaced by sophomore righthander Kyle Monk. The Panthers scored one run in the bottom of the eighth off Monk to tie the game at five, but were unable to take the lead.

With the score tied at the start of the ninth, the Eagles’ hitters were determined to regain the lead and secure the victory. Sophomore designated hitter Brian Hernandez led off the ninth inning with a single. Eisner then singled up the middle, scoring junior Jeff Ronpirin, who was running for Hernandez. Peacock then scored on a wild pitch to give the Eagles a 7-5 lead. With two runners on, Maldari doubled to left center, scoring two runs. After Maldari stole third, sophomore Wilson Morgan grounded to third, scoring Maldari.

Freshman Matt Randolph came on the mound and pitched a scoreless ninth, securing the victory for the eagles.

[quote_box name=”Wes Peacock”]Our bats are hot and we were able to put a few on the board and close it out in the ninth.[/quote_box]

Weeg went six and a third innings, giving up four runs, four hits, and striking out 10. His appearance went down as a “no decision.” Monk went one and two-thirds, earning the win.

“Weeg pitched great and kept us in the ballgame,” Peacock said. “Our bench’s energy really pumped us up, which was huge.”

At the plate, the Eagles got contributions from all around, with Maldari and Morgan each getting two hits and driving in two runs, and Eisner and Peacock with two hits apiece.

“The guys are really starting to come together,” Assistant Coach Connor McGuiness said. “We’ve just got to continue to take it one game at a time. If we take care of business, we’ll be putting ourselves in a strong position for the season.”

The Eagles will finish their season on Saturday when they take on Piedmont College at home at 3 p.m., but are looking towards the future to make the NCAA Division III Tournament.

“Senior leadership is huge right now,” Peacock said. “The guys who were on the team last year know how it is and know what it takes to get there.”

In order to make the tournament and keep their season alive, the Eagles will most likely have to win the remainder of their games, according to Peacock.

“The seniors and I want to keep playing this game as long as we can because we’re probably done after this year,” Peacock said. “That’s what’s keeping me going every day, just trying to keep this season going because it’s probably my last.”