When the Emory Student Center (ESC) opens next month, students can say goodbye to the DUC-ling. The structure, which has served as Emory’s temporary dining facility for the past two years,will be disassembled and returned to its manufacturer in late May, according to Vice President for Campus Services Matthew Early. The land currently occupied by the DUC-ling will be converted into a green space.

Sprung and Kitchens To Go, which manufactured the building and kitchen facilities and leased them to Emory, haven’t decided where the structure will go next, according to Early and Sprung’s Regional Business Development Manager Tray Thomason.

The space that the DUC-ling currently occupies will become a small greenery space with grass, trees and a paved pedestrian walkway connecting the Woodruff Physical Education Center (WoodPEC), ESC and Dobbs Hall. A wall of greenery will be built along the roadway that goes around the DUC-ling and to the WoodPEC due to the height difference between the DUC-ling’s platform and the area behind it.

In Asbury Circle, the road around the island will be repaved by red bricks and closed to motorized vehicles in the next academic year, Early said. Cars will be permitted to park along the road next to Dobbs Hall but will not be allowed in Asbury Circle.

The DUC-ling space and repaved Asbury Circle are expected to be completed in January 2020. 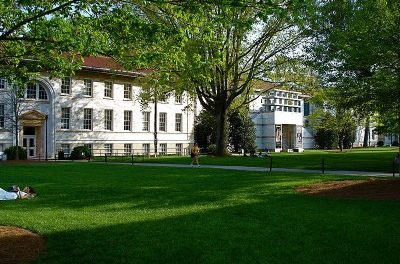