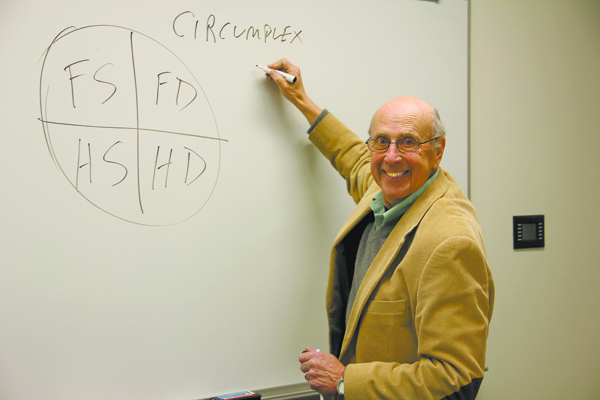 Once, there was a man who loved straw caps and who taught at Emory University. He spoke of muffins and pancakes on college campuses and of mustaches and spaghetti on Thanksgiving. He wanted his students to figure out what drove them, what excited them, what lit them on fire.

This is just one chapter in the story of Professor Marshall Duke.

A beloved and renowned professor at Emory University who is interested in personality theory, family relationships and storytelling, among many other things, Duke did not always know he wanted to be a psychologist.

Growing up in the age of the space race, Duke had his sights set on the stars. Entering Rutgers University, he had his mind set on being a physicist and working for the government.

“The only people who didn’t think this was a good idea were the people in the math, physics and chemistry departments,” he says. “Because although I did well on these in high school, I got Cs in chemistry and a D in calculus. It was terrible.”

Ironically nowadays, “when I meet people, I tell them I’m an astronomer,” Duke laughs. Often when people find out that Duke is a clinical psychologist or that he has studied nonverbal behavior, they assume he is psychoanalyzing them or critiquing their body language. (Cue me changing my posture for the rest of the interview).

During his first semester at Rutgers, Duke went to an advisor in the dean’s office to explain his academic situation. The dean told him, “It’s very simple, you haven’t found the thing that sets you on fire yet.”

After taking vocational interest surveys, it was clear that although Duke had an interest in mathematics and chemistry, it was not beyond a “surfacey one.” He found that his “emotional interest was much more in the humanities and understanding people.”

Drawing on his personal experience, Duke says he encourages students to find what sets them on fire.

“One person can come along in your life and redirect you in a very significant way,” Duke says. “That really is my basis for my philosophy about the importance of the relationship between faculty and students.”

Duke has built his academic and research career around families and traditions. He has won the Emory Williams Award for distinguished teaching two times, as well as receiving Emory’s highest service honor, the Thomas Jefferson award. Working with his closest friend and research colleague, Professor Stephen Nowicki Jr., he has written several books including, Helping the Child Who Doesn’t Fit In, along with more than 100 research titles and books. Duke has even been interviewed on “The Oprah Winfrey Show.” His work has been featured in many publications, including The New York Times, and the The Huffington Post. Duke does all of this, while focusing on connecting to students at Emory and acting as a supportive parent and involved grandfather.

Tradition runs through every aspect of Duke’s life, according to his wife Sara and their children; he places an emphasis on family ritual to bring them closer together.

From the start, Duke has tried to maintain a balance among clinical psychology, research and teaching by allowing his research to inform his practice and visa-versa. After graduating Rutgers with a B.A. in psychology and German, Duke went to graduate school at Indiana University.

After earning a Ph.D. in clinical physiological psychology in 1968 from Indiana University, Duke went to a hospital in Connecticut where he worked more on relationships and families.

In his clinical work, he noted that the children who had a “fairly good sense of their family history” were more adept at overcoming a range of social, educational and psychological problems.

“The more the kids knew about their families, the better they got and the quicker they got better,” he explains.

This sparked an interest in Duke, so in 2000, when the opportunity to take part in an interdisciplinary study of Myth and Ritual in American Life (MARIAL) came to Emory, he grabbed it.

The MARIAL Center was started by Bradd Shore, a professor in the anthropology department. The goal of the center is to look at how American families are affected by modern life.

“We [Duke and Professor Robyn Fivush] were interested in whether or not family stories bring strength and continuity to families that are pulled apart in so many ways,” Duke explains. Duke directs the family narrative component at MARIAL.

Fivush and Duke started conducting research with families to learn about the differences family storytelling makes. They began this research right before 9/11 and because of the traumatic nature of the event they were able to see that the children with more awareness of their family background were able to cope with the situation more easily. In their research, they found that grandparents, more often than parents, were the main family storytellers, with grandmothers carrying the heaviest load.

During Duke’s childhood, his maternal grandmother from Hungary lived with his family, so he heard many stories.

“There’s a definite sense of connection to other generations when you know what happened to them,” Duke says. “It makes people stronger. It makes kids stronger.”

Duke grew up in Union City, N.J. with one older brother, who is a physician and survivor of 9/11. His parents owned a live poultry market that Duke worked at after school.

When Duke was studying at Rutgers, Sara was attending Douglass, the sister college of Rutgers. One day Sara bumped into someone two years older than her from high school who lived next to Duke.

“I didn’t know this guy particularly well, but he said, ‘I know the person you’re going to marry, what’s your number?'” Sara recalls. “We went out that weekend to a Peter, Paul and Mary concert – and that was it.”

The two ended up getting married when Sara was a sophomore and when Duke had just graduated. They have been married for 48 years.

Sara describes Duke as “the most faithful person” she ever could have met. He continues to make her laugh and is a dedicated father and grandfather. At one point when Sara went back to graduate school, Duke took care of their kids. Duke’s daughter, Sharon Duke Estroff said, “Every family needs a Jewish mother and in our family, it’s our father.”

Sara and Duke made sure to tell stories and build family rituals with their own kids. The Dukes always look forward to their Thanksgiving, as Sharon says, “knowing that no matter how crazy our daily grind gets, we’ll spend one glorious week in November doing what we love to do.” For the holiday, Professor Nowicki’s family joins the Duke family at Hilton Head.

The families have celebrated the holiday together for the past 35 years: “We always join hands and give thanks for being together,” Nowicki says. “Each passing year is more meaningful than the last.”

One year Sharon was delayed because of a medical complication, but she was able to get there by Friday.

“It didn’t really matter what day it was,” Duke explains. Now they always celebrate Thanksgiving on Friday and have a peaceful Thursday night while the rest of America is running around like turkeys with their heads cut off.

“On Thursday, we made spaghetti and because it was just a rather off kind of night, we had wine bottles and somebody had the idea to burn a cork and put mustaches on people and make it an Italian night,” Duke chuckles. “If somebody were to walk into the house on Thanksgiving, they would think it’s a group of psychotics, because we are eating spaghetti with Thanksgiving mustaches.”

Rituals are constant in their world of ups and downs.

“It’s a way of anchoring us,” Duke explains. “[As a family] we do a lot of odd rituals and most of them are just fun and the sillier I find, the better.”

In his office, there are stacks of papers and magazines all around, while overstuffed bookshelves line the walls. Two straw hats signed by students lay on one shelf. On one of his first sabbaticals in Israel, Duke started to wear hats to protect his bald head. He started the tradition of having students sign his hats.

“The students began following my hat, and I decided to have them sign it at the end, and that became a souvenir for me,” Duke explains.

From the “Net generation” to “millennials,” the current generation of students has been given many names; Richard Foreman, a playwright, coined the name “Pancake People.”

A pancake person, says Duke, is one who has a broad range of knowledge, but no depth in any given subject area.

In this generation, the “body of knowledge we carry is huge, but not internalized,” Duke explains. “We have become very dependent upon outside information. I do think we have to remember some things, not just where to find it, but remember it.”

He feels that another breakfast food model would work better – the muffin. It has an expansive top and then a deeper cake part with substance and density, and “people can connect to it, because metaphorically they realize, ‘I just need to deepen in some places.'”

Duke loves to challenge his students and watch them grow over time: “There’s no question in my mind that college has a dramatic effect,” Duke says. “Their minds change, and they generate ideas they never could have generated before and that’s very exciting. It says to me that there’s purpose in what I do.”

And so the man who loves straw caps and teaches at Emory continues to tell stories, share his passion for learning and creativity and, hopefully, live happily ever after. 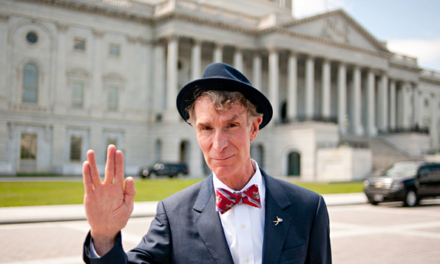 Emory Through the Decade