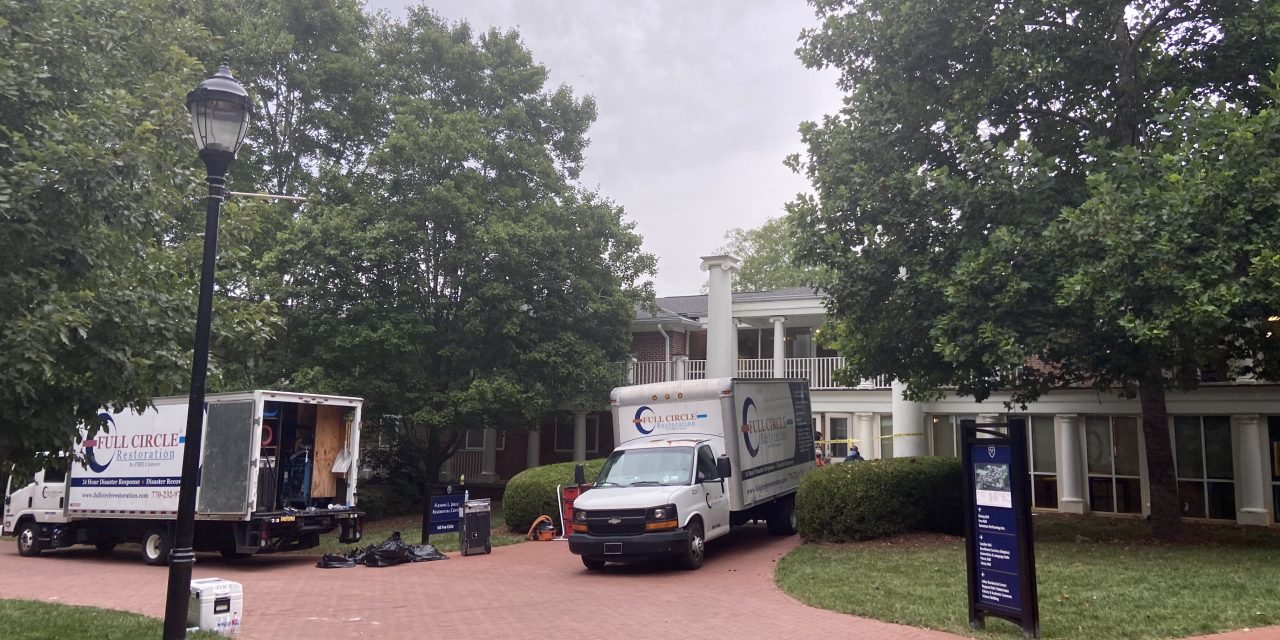 Students in Oxford College’s Dowman Residence Hall had to temporarily relocate after a sprinkler in a room on the top floor of the dorm was activated on Saturday evening, Vice President of Academic Communications and Reputation Leadership Nancy Seideman told the Wheel on Monday.

The University has not released a reason as to why the sprinkler was activated. Following the flooding, students were given a choice to either sleep in cots in the Williams Gym or relocate to a nearby hotel paid for by the University.

A team of contractors has been working since Saturday to remove water and carpet from the hall, Associate Dean of Campus Life Phillip Sullivan wrote in a Monday email to Dowman residents. Once new carpeting is installed, the Environmental Health and Safety Office will monitor each room and hope to approve occupancy as early as Wednesday evening, Sullivan wrote.

The University has provided shuttles to transport students between the hotels and campus, starting on Sunday morning. Additionally, professors have been notified and told to make allowances for affected students.

Steven Chen (22Ox) said he was walking to his room in Dowman from playing frisbee at 4:50 p.m. on Saturday when he saw residents standing outside the hall watching police officers enter the building. About 10 minutes later he looked up at his dorm room window  and realized the officers were attending to his room.

His roommate, Arden Chan (22Ox), said he had gotten back to his dorm around 4 p.m. and was sitting at his desk when the sprinkler above him turned on. He used an umbrella and swimming goggles to move all of his and Chen’s valuables, electronics and school supplies out of the room.

“I rationalized what was most important to me and tried to salvage it,” Chan said. 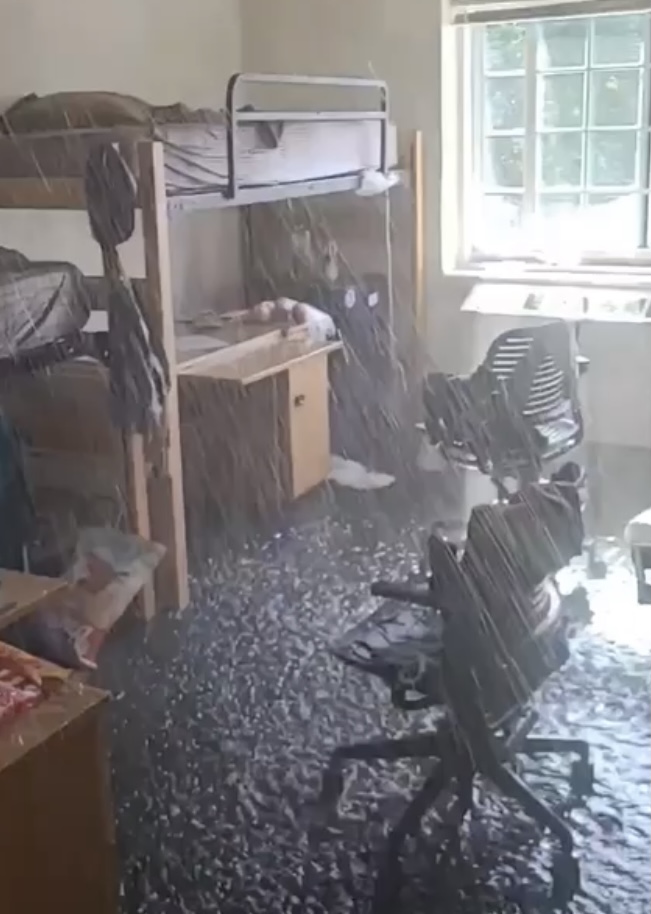 While sitting in his dorm on Saturday afternoon, the sprinkler in Arden Chan’s (22Ox) room activated, spouting black water on all his and his roommate’s belongings. The college has said that it will try to start moving residents back in to the hall as soon as Wednesday evening. (Arden Chan (22Ox))

Roommates Cole Destaven (22Ox) and Joe Gardner (22Ox) have stayed in the Hampton Inn for the past two nights since the flooding. On the afternoon of the flood, Destaven was about to leave the dorm when he saw Chan two doors down, frantically moving his stuff out of his room. Once he realized what was happening, Destaven and Gardner said they went back into their room to grab some of their belongings.

“Initially I went downstairs because I thought it was going to be OK because we had to go somewhere [but then] I was like I should probably go grab our laptops,” Destaven said. “In our room, it was like one inch of water at first, and as I stepped in, it was just reaching up to my ankles and [my shoes] were completely soaked.”

The water, some residents said, was black and emitted a bad odor. The College has not provided a definitive answer to why the water had this smell and color. Seideman wrote in a statement to the Wheel that it is “normal” for small amounts of sediment to be present when a sprinkler is activated.

Chen said that most items in his room were ruined by the sprinkler, including white clothing, towels and his laptop.

“As long as my laptop gets reimbursed, most items are replaceable,” Chen said. “I’m sure the University is doing everything they can.”

The College has said that they will work with students to document “damaged personal property” and continue to assist them through the Emory insurance claims process. Residents whose technological devices were affected by the flooding, like Chen, were able to borrow computers from the library.

Still, Rachael Yan (23Ox) and her roommate, Kimberly Lopez (23Ox), said they have had little time to do school work. The pair lives on middle Dowman toward the end of the hall where there was less water damage.

On Saturday night, Yan and Lopez went to stay at Yan’s parents house 45 minutes away from campus but moved to the La Quinta with other Dowman residents the next day. While their room received minimal water damage, Lopez said that the experience was “definitely stressful.”

“It’s kinda surprising that it’s barely been a week,” Lopez said. “We haven’t had a full week of classes yet and this has already happened.”

Before the start of the semester, a newly constructed modular housing community located in the Haygood parking lot called “The Mods,” flooded on Aug. 18. The flooding in the “gold” hall in the Mods was due to a water pipe rupture and is unrelated to the flooding in Dowman Hall, according to the College.

Correction (8/31/2021 at 11 a.m.): A previous version of this story incorrectly stated that only half of Dowman Hall residents had to relocate to local hotels. In fact, all residents were forced to relocate due to the flooding.