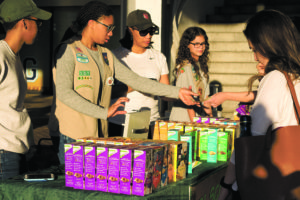 Whenever a kid sells any kind of food or drink it’s probably going to taste like trash. I’ve seen my fair share of disgusting concoctions, from overly sweet lemonade to horrifically dense chocolate cake, which I reluctantly agreed to buy out of pity. As a result, when an innocent Girl Scout asked me “Hey, do you want to buy a Girl Scout cookie?” as I was on my morning run to class, I replied tactlessly with a firm “No”.

That was until I noticed all the hype surrounding these cookies. “Hey bro, you have to try Thin Mints,” a hallmate said. “Dude, Samoas are all the rage right now,” my roommate announced. “Savannah Smiles are hands down the best!” a close friend stated (I realized that our friendship could no longer continue).

After analyzing each cookie, I conclude that Girl Scout Cookies are not your average sweets sold by pushy children; they carve themselves a niche that makes them worthwhile rather than pitiable. That being said, not all cookies are equal. A few are always perfect, while others only fill a specific craving and some are totally outclassed.

Many claim that Thin Mints are the best cookie available. According to College freshman Camila Guevara, a Girl Scout alumna taking orders for cookies from other freshmen, of the approximately 200 orders placed through her, about 60 were for Thin Mints. The cookies strike a perfect balance between light mintiness and subtle sweetness, rather than just tasting like chocolate mixed with toothpaste (looking at you, peppermint bark).

Thin Mints are the ideal snack to eat before a party. The lack of gunk (from nuts or the like) that can collect on your teeth means that your award-winning smile will not be compromised. Additionally, the fresh, minty taste is both delicious and optimally scented, so you need not worry about your breath smelling bad afterwards. Their crispiness also makes them delectably addictive — yet four of these beauties are only about 161 calories so your dress buttons won’t pop open.

The best time to eat Trefoils? Never. While it’s fair to say that there’s nothing wrong with Trefoils, there is nothing right with them either. Like Thin Mints, they have a crispy texture. Like Samoas, they are sweet but not overpowering. Like shortbread, they go well with a strong coffee, but in all honesty this country should leave shortbread to its true master: Scotland.

A little dry, a little heavy, but certainly an ideal biscuit to pick up if you’re rushing to class. The savory peanut butter fills you up, and the biscuits that enclose a layer of cream mean your hands are clean enough to take notes (or to text) in the middle of class.

Oh, the Samoa: the biscuit that presented me with the true apex of youth entrepreneurship. The shabby aesthetic is the mark it bears from the gods, who say to the humble cookie, “O you, who so wonderfully balances the sweet-umami of coconut shreddings with caramel and chocolate, you shall forever hold the mark of an ugly appearance lest you too perfectly replicate the beauty of the heavens.” Guevara told me that among the orders she received from the Class of 2020, the most popular order was for Samoas — for good reason. These cookies can be eaten anytime but are best-suited for late-night study sessions. In an act of autonomous classical conditioning, these humble biscuits, with their sheer deliciousness, will encourage you to get through your day’s work and to leave the library feeling much happier.

If the Samoa is the perfect kid who graduated college with a 4.0 while also playing quarterback for the football team and then earning millions in his or her self-founded start-up, the S’more is the average son who took a forced gap-year to “find himself.” While the Samoa successfully does something different, the S’more does nothing special with the standard cream biscuit formula. In short, this banal biscuit is not worth $6 at all. Stick to Oreos for your late night munchies.

Although I think it tastes like the little bits of chewed DUC pancake stuck on my teeth after I take a swig of orange juice, I can see why people like these. That light, tangy flavor makes it ideal for eating while reading something super dense and profound (think Arthur Schopenhauer or some other European philosopher with a really cool sounding last name ). Savannah Smiles demand a level of discipline; you are not basic enough to order just the chocolate-covered cookies.

Do you have a medically confirmed gluten intolerance? Because that is the only instance in which it is acceptable to eat these boring cookies. Stick to Samoas.